Rohingya crisis - 'These people need all the help they can get'

As the number of Rohingya refugees soars, Monday's donor conference in Geneva aims to secure extra funding to provide urgently needed aid. DW spoke to UNOCHA's Jens Laerke about the global response to the problem. 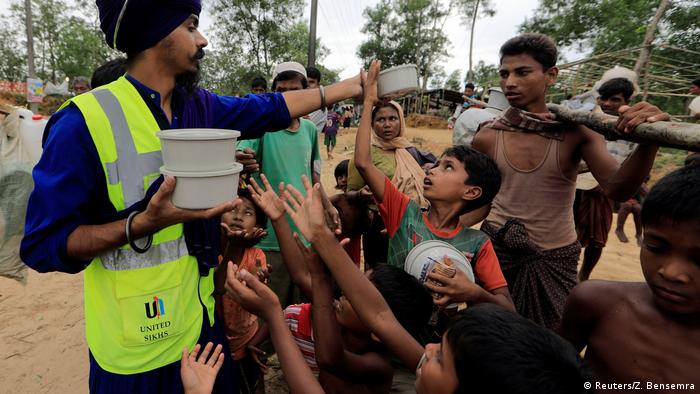 DW: What can you tell us about the current situation facing the Rohingya people in Bangladesh?

Jens Laerke: The situation today [the interview was conducted on October 19] is that we now have well over half a million Rohingya refugees since August 25. These people have fled violence and insecurity in Myanmar's western Rakhine state. They have moved into the region around Cox's Bazar in neighboring Bangladesh.

The actual number of refugees registered, as of today, stands at around 582,000. More people are coming in on a daily basis. We also have refugees who had fled earlier, before the recent outbreak of violence in the region.

We are identifying new refugees as we scour the area to register them. This is the fastest-growing refugee crisis in the world. So we have had to struggle just to stay on top of things and assist the vast numbers of people who are in need of aid.

The Rohingya people who are now in Bangladesh have fled there with nothing except the clothes on their backs. We have seen their villages being burned down and heard stories from them about the horrific violence inflicted upon them. Many of them are wounded and have broken bones. Women have been subjected to rape and other forms of sexual violence. The majority of those who have sought refuge in Bangladesh are women, children and the elderly.

How much international financial assistance, in your view, is needed to cope with the situation?

That's a tricky question, because it's a growing crisis. So I cannot say at this point in time how much it's going to ultimately cost. It's likely that the costs and needs are increasing as we speak. We are also concerned that these people are currently living in makeshift shelters and camps that they have erected by themselves. The locations, for instance, lack proper water and sanitation facilities.

There is therefore the risk of what we call an "emergency within an emergency." That means, for example, an outbreak of an epidemic like cholera or some other disease in the camps that would cause a health emergency, in addition to the existing security emergency. We have so far not seen that happening in this case, but there is a high risk of that occurring. 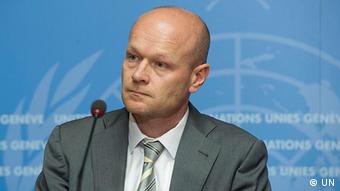 Laerke: 'This is the fastest-growing refugee crisis in the world'

What is needed to stabilize the situation?

What we have done as UNOCHA is that, together with international NGO partners, we have come up with a plan to address the situation. This response plan aims to provide assistance to around 1.2 million people. The question could come up: Why for 1.2 million, when there are only around 600,000 refugees?

That's because we also need to help the host communities. The refugees are coming into a very densely populated country where people are poor, to begin with. And when all of a sudden they have an additional 600,000 people, it puts a lot of strain on the resources of these local communities as well. So we need to be able to help them also.

The price tag for all the projects in that response plan amounts to about $434 million (€367 million). This money would be spent on providing aid for the six-month period between September (we have already started) and until the end of February 2018.

What measures do you intend to implement as part of your response plan?

As I said, those people are coming essentially with nothing and they have suffered horrifying treatment. They need the essentials for their survival. They need food, so we're working to improve the distribution of food. We're also looking at helping them build shelter. They need water and sanitation, which are very important.

Unclean water is a recipe for disaster and a recipe for epidemics. These people also need different kinds of health care. Some of them have been wounded and they need immediate help. We need a basic health care system that any society needs. And what we have identified particularly in children and women who have been subjected to sexual violence is that they need psychological first aid. They need to have an opportunity to get psychological support.

My colleagues at UNICEF are very concerned about many children who have seen their families being killed in front of them. They have now arrived in Bangladesh, but they are almost apathetic. They just sit down, don't speak and gaze into space. They are completely traumatized. They need some urgent psychological help to, if ever, recover from this. This is very critical.

We expect the international community to step up and help the Rohingya people who have fled. We expect countries worldwide to show solidarity with them as well as with the people and government of Bangladesh. They have kept their borders open and welcomed the Rohingya. They have provided them with what they have, giving them shelter and protection. We need to step in as international community and we need donors' support to do so. I don't think that anybody would question that these people need all the help that they can get.

You have said that the response plan covers the next six months. But what needs to be done on a political level to resolve the problem?

As a humanitarian, I cannot really speak about the political solution. What we have said consistently from the UN is that the problem originates in Myanmar and the solution must be found in Myanmar. For those who have fled Myanmar, the first priority is of course life-saving aid. But we are also aware that we need to look ahead, beyond the sixth month. That's because we must do what we can to help these people for a considerable period of time and we need to do everything we can to facilitate their return to Rakhine, if they so wish, if they voluntarily want to return in a safe and secure way.

When that will happen is simply impossible for me to estimate right now. But it is, of course, the long-term goal.

Jens Laerke is deputy spokesperson of the UN Office for the Coordination of Humanitarian Affairs (UNOCHA). He is based in Geneva, where a donor conference is set to take place on Monday, October 23.

The lawyers argue the move by PM Narendra Modi's government not only undermines India's long-established tradition of granting refuge to the needy but also flouts the administration's own guidelines on refugees. (02.10.2017)