Germany's Free Democrats have called off coalition talks with Angela Merkel's CDU/CSU bloc and the Greens. The German president is set to make an announcement on Monday afternoon after meeting with the chancellor.

Germany was thrust into uncertainty early Monday morning after a month of four-party exploratory talks about forming a so-called Jamaica coalition collapsed.

Chancellor Angela Merkel pledged to navigate Europe's largest economy through a difficult period ahead after the pro-business Free Democrats (FDP) pulled out of make or break negotiations with her Christian Democrats (CDU), Bavarian sister party the Christian Social Union (CSU), and the Greens.

Merkel said she regretted the breakdown of talks, noting that she and her conservative bloc believed they were "on a path where we could have reached an agreement."

"I regret, with full respect for the FDP, that we could not come to a mutual agreement," she told reporters shortly after midnight local time. 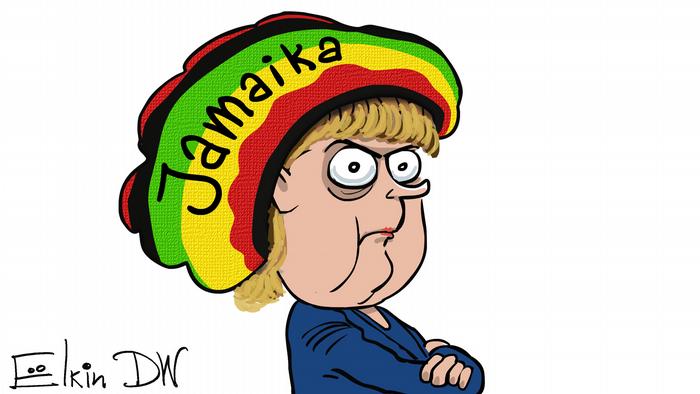 The 'Jamaica' coalition is no longer an option for Merkel

What next for Merkel?

While Merkel will remain acting chancellor, it remains unclear where this leaves her prospects of forming a new government.

Her conservatives could choose to enter talks with just the Greens to form a minority government.

The Social Democrats (SPD), who were the second-biggest party in the September election, ruled out forming a second consecutive grand coaltion later on Monday. SPD leader Martin Schulz said his party is "not available" for another coalition with Merkel and the SPD is not afraid of new elections.

After suffering a humiliating election loss in September, the SPD has repeatedly reaffirmed that its role in the upcoming Bundestag will be in opposition.

Merkel said she would inform President Frank-Walter Steinmeier, who has the power to call new elections, on Monday afternoon of the failure of the coalition talks.

This suggests that a minority government with the Greens may be out of the question and the country could be heading for a new election.

An hour before Merkel told reporters that the talks had collapsed, FDP head Christian Lindner announced that his party had walked out of the negotiations after "reached compromises were questioned again."

"It is better not to govern than to govern wrongly," he said.

Lindner tweeted shortly afterwards defending his decision to step away from the negotiating table.

"We don't blame anyone for sticking to their principles. But we also do so ourselves. We were voted for to reverse the current trends, but we couldn't reach an agreement."

Horst Seehofer, the head of the CSU, said that an agreement between the four negotiating parties "had been in reach" before the FDP walked out.

That sentiment was echoed by Green party co-chair Cem Özdemir, who said that he and his team had always shown a readiness to compromise on key issues. "However, the only possible democratic constellation was unfortunately shot down by the FDP," he said.

Lindner's decision to call off talks was also rebuked by Green party lawmaker Reinhard Bütikofer, who posted on Twitter that the FDP chief had chosen "his own brand of populist agitation over political responsibility."

Although the CDU/CSU received the most votes in Germany's national election on September 24, its surprisingly low result (32.9 percent) meant that the conservatives needed the FDP (10.7 percent) and the Greens (8.9 percent) in order to represent over 50 percent of voters.

A "Jamaica coalition" – so named for the party colors of the three blocs – has worked at the state level, but has never been attempted at the federal level. For some, the prospect of a "new constellation" of political parties promised to foster a revived political culture and policies to bring the country foward.

During four weeks of difficult exploratory coalition talks, the parties were able to agree in principle on a number of issues, from digitalization to agriculture. But they struggled to find consensus on the hot button issue of immigration. More than 1 million people seeking refuge have entered the country since 2015.

The refugee issue helped fuel the rise of the right-wing Alternative for Germany (AfD), which won nearly 13 percent of the vote to become the third-largest party in the Bundestag after pulling votes from across the political spectrum.

Read more: Germany's coalition talks - what are the sticking points

The Greens also demanded that Germany wean itself off coal to meet climate change goals.

The FDP and CDU/CSU were against rapidly shutting down coal-fired power plants over concerns about job growth and the economy.

Refugee family reunification in Germany was a major sticking point in preliminary coalition talks. DW explains how the process works – and why critics want to lift the current ban permanently. (17.11.2017)

Angela Merkel's coalition talks for next German government: what you need to know

Chancellor Merkel faces a historic task in forging a "Jamaica coalition" of the conservatives, Free Democrats and Greens. The parties have a long way to go to bridge their differences, and have no option but to succeed. (18.10.2017)

What happens if Germany can't form a governing coalition?