Leader Martin Schulz accepted the blame for the SPD's bitter defeat in the German election. His deputy has accused him of failing to recognize the seriousness of the party's crisis as political intrigue mounts. 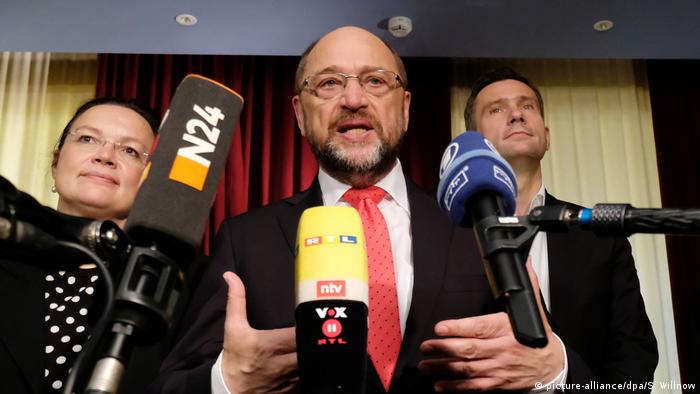 After suffering its worst election defeat since 1949, Germany's center-left Social Democrats (SPD) began some internal soul-searching on Monday as party leader Martin Schulz unveiled his plan for the future.

The SPD garnered only 20.5 percent of the vote in September's general election – and while Chancellor Angela Merkel's center-right Christian Democrats (CDU) took a tumble to 32.9, Merkel is still on track for a fourth term in office.

Many had expected Schulz to step down after the loss, but a narrow victory in regional elections in Lower Saxony in October have convinced the SPD that they may be very, very far down – but not quite out.

The new plan laid out by Schulz calls for "enabling the participation of party members in personnel decisions," including the candidate for chancellor. The suggested move is a bit closer to system of primaries employed by political parties in the US, and rare in Europe where party leaders often directly select their candidates.

Beyond this, however, Schulz did not suggest any radical changes to the party's platform in his "Compass 2018" proposals.

- Who is Andrea Nahles, the new SPD leader in parliament?

Schulz: No one else to blame

"I do not have an answer for every question," he said at the opening of the party meeting. He also admitted that he, "as leading candidate and the entire SPD lost the election."

"Not the media, not the pollsters nor our political opponents are to blame."

While he did concede that the SPD did not do enough to differentiate itself from Merkel and the CDU after four years in a coalition government together, he did not offer any concrete solutions to finally toppling the eternal chancellor.

Instead, Compass 2018 calls for focusing on party member's concerns and stressing the key policy areas of European integration, digitalization and social justice – implying that the SPD plans to double down on its core ideas and voters instead of branching out. Schulz also called for the party to develop a separate strategy for the former East German states, where the far-right Alternative for Germany (AfD) had its best results.

Ahead of the meeting, the strain of the defeat was beginning to show between Schulz and his deputy, Hamburg mayor Olaf Scholz. Presenting a paper in opposition to Schulz's Compass 2018 – and fueling speculation that he is gaming for Schulz's job – Scholz accused the party leader of ignoring the seriousness of the situation and called for an end to "excuses" for the SPD's sinking numbers.