Hardly anyone could have imagined that talks to form a new German government would collapse. Anything's possible, from minority rule to a fresh vote. One thing's clear: it's a blow for Angela Merkel, says DW's Ines Pohl. 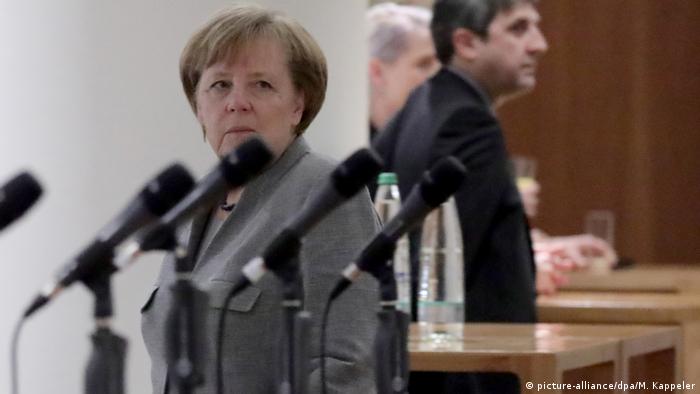 Brexit, Trump and now this. German Chancellor Angela Merkel finds herself unable to form a government. In economically stable and successful Germany — the heart of Europe, the engine of the European Union — it's now completely unclear where the government goes from here.

Shortly before midnight on Sunday, head of the liberal Free Democrats (FDP) Christian Lindner announced that the preliminary coalition negotiations had broken down. "It is better not to govern, than to govern falsely," he said.

Lindner's harsh words came after weeks of tough talks to form a governing coalition, which admittedly from the outset resembled a marriage of convenience rather than one born out of love.

Ultimately, the talks became too caught up in the details. Not once did anyone take the chance to seize any added value offered by the negotiating parties' ideological differences.

Far-right AFD in the Bundestag

For the first time, the far-right Alternative for Germany (AfD) has been elected to the Bundestag, thereby throwing the usual prospective coalitions into disarray.

There are no easy solutions in a parliament where seven parties are now represented. Once the Social Democrats had refused to be part of a new grand coalition, Merkel found herself forced to enter into talks in which, for the first time in her 12 years as chancellor, she was unable to exercise any real power.

Read more: The far-right AfD in the Bundestag: What you need to know

Weakened by her party's poor performance in September's general election, Merkel's role was solely that of a mediator — and she failed. The FDP prevented Merkel from finding a new narrative and developing a new underlining idea for a governing alliance; an alliance that could have moved beyond the old tried and tested ways and instead tackled this new political climate with a brave new set of ideas.

Merkel's refugee policy at the center of the talks

The refugee crisis was always going to be at the center of this struggle to form a new government. Merkel's liberal refugee policy has allowed the AfD to grow strong. And it ultimately may have also led to this collapse in talks.

That is not to say that it was the wrong decision to help people in desperate need. But it is also true that it has not been possible to prevent this show of support toward others from turning into a threat to one's own self.

Read more: Germany's coalition talks: What are the sticking points?

These failed coalition talks show that Germany is also facing its own crossroads. Economic success does not alleviate people's fear of a future in which refugees symbolize the uncertainties posed by a globalized world.

Germany won't be the only country in shock. All of Europe will be, as well. For now many weeks, perhaps even months, of uncertainty lie ahead of us.

What happens if Germany can't form a governing coalition?