Germany′s coalition talks: What are the sticking points? | Germany | News and in-depth reporting from Berlin and beyond | DW | 16.11.2017

Germany's coalition talks: What are the sticking points?

Germany's conservatives, FDP and Greens spent nearly a month in failed exploratory talks to form a coalition. DW breaks down the thorniest issues.

For more than a month, four of Germany's most unlikely political partners sought to overcome differences to form a viable coalition government before failing to reach an agreement on November 20.

A so-called "Jamaica coalition" – named for each party's respective colors: black, yellow and green – has worked at the state level, but has never been tried at the federal level.

DW looks at the four sticking points that dominated the exploratory talks.

Limiting migration numbers has become a contentious political topic across Germany due to the over 2 million migrants who have entered the country since 2015.

After much infighting, the CDU and CSU agreed that a new government should pursue a limit of no more than 200,000 people entering Germany for humanitarian reasons. The FDP has proposed an annual target of between 150,000 and 250,000 people. 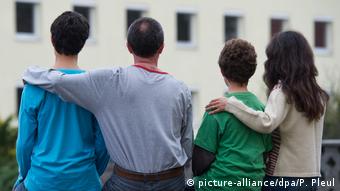 What will the policy on refugee family reunification in Germany be after the negotiations?

While the CDU/CSU wants this moratorium extended, the Greens are calling forfamily reunification for refugees with asylum status as well as so-called "subsidiary protection."

They argue the move would deter human trafficking. The FDP has said it would consent to such a move only if certain conditions were met. Meanwhile, the CSU appears unwilling to compromise, opting instead to send the signal that future immigration in Germany will be strictly controlled.

The issue of climate protection is similarly vexed. While all four parties essentially acknowledge Germany's climate protection goals, they disagree greatly over implementation. Whereas the environmentally minded Greens have called for the immediate closure of 20 coal-fired power plants, the CDU/CSU and FDP say the move makes no sense economically and could potentially be dangerous.

Here, too, a fight has broken out over numbers and how they should be interpreted. The Greens claim that 90-120 million tons of carbon dioxide emissions must be cut to meet Germany's 2020 climate goals. However, the conservatives and FDP say the number is much lower, somewhere between 32 and 66 million tons.

The FDP and the CSU, above all others, have also continued to warn of the threat of power outages should the power plants be taken offline. But the Union and FDP have said they would be willing to close half of the coal-fired plants that the Greens want shuttered.

The Greens remain steadfast in their demands that a Jamaica coalition initiate a phase-out of internal combustion automobiles, though they recently backed away from previous demands that no internal combustion automobiles be registered in Germany after 2030. Their reversal nevertheless failed to make negotiations any easier. FDP leader Christian Lindner held out that, "Above all else, there is still no consensus over the fact that there can be no limits placed upon individual mobility."

Another issue that has flared up in the home stretch is how to structure Germany's European policy. Should the republic continue to work toward broadening the eurozone, even if that might mean a considerable expansion of mutual bailout liability?

The FDP is strictly against any future bailout of countries that maneuver themselves into financial dire straits, as was the case with Greece. It has also voiced opposition to French President Emmanuel Macron's call for a eurozone budget. The Greens, however, support Macron's reform ideas for both the eurozone and the EU. 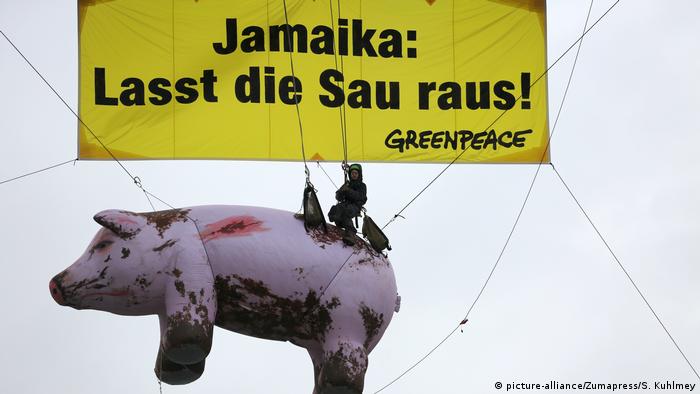 Greenpeace activists protested the potential Jamaica coalition parties, telling them to 'let the pig out'

Sticking point 4: How many campaign promises can be kept?

The issue of just how much taxpayer money a amaica coalition would be able spend is also causing friction.

The solidarity surcharge, or so-called "Soli," is a key example. The tax was levied to finance infrastructure and development in former East Germany after reunification, but the FDP is pushing for it to end in 2019. The CDU/CSU says that it wants to incrementally phase out the tax, which pours billions of euros into state coffers each year.

However, the Greens want to keep the tax, claiming that otherwise financing for important investments in education and digitization would be insufficient. 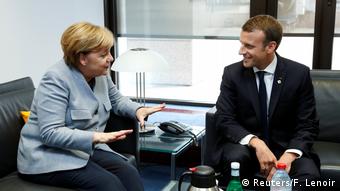 Merkel may have to tell Macron to hold off on his EU finance reform goals, depending on what agreement she can reach with the FDP and Greens

While the government is expected to have a tax surplus of €30 billion ($35.3 billion), it remains unclear which projects a Jamaica coalition could fund. According to initial budget estimates, the parties have earmarked around €100 billion in new spending.

If the country is to maintain a balanced budget, which all four parties have agreed to, then a number of pet projects will have to be put on ice.

This article was first published on November 16. It was updated on November 20 to include the collapse of the preliminary coalition talks.

Four German political parties — the Christian Democrats, Christian Social Union, Free Democrats and Greens — are now in their third week of talks to form a government. They disagree about more things than they agree on. (30.10.2017)

Critics say Merkel's last government failed to deliver on the energy transition. Can her next do better? The Greens will likely be part of the coalition - but so will the pro-business FDP. Environmentalists are worried. (28.09.2017)

The people wanted something new and that's what they'll get. Currently being negotiated in Berlin, the next government would take the country into uncharted waters. And that's a good thing, says DW's Jefferson Chase. (18.10.2017)

Chancellor Angela Merkel confident coalition is on track despite divisions

The chancellor has said that her CDU party, the Greens and the business-friendly FDP will have an initial agreement ready this week. It is nearly two months since Germany held its general election. (13.11.2017)

The Free Democrats say there's no guarantee they'll do a deal for a new German government with the conservatives and Greens. Are they just bluffing, or do they think they'd stand to gain if a new election were called? (06.11.2017)

Germany's internet infrastructure ranks poorly compared with that of other industrialized countries. Leaders from the four political parties negotiating a new coalition government in Berlin want to change that. (03.11.2017)

How long will Germany have to wait for a government?

The Netherlands finally has a new government, seven months after the election in March. There are similarities to the Dutch situation in Germany — but a key difference could make negotiations in Berlin even harder. (10.10.2017)

Chancellor Merkel says a compromise on migration reached with the Bavarian CSU is a good basis for exploratory talks on forming a ruling coalition with the Greens and the FDP. Talks are to begin on October 18. (09.10.2017)