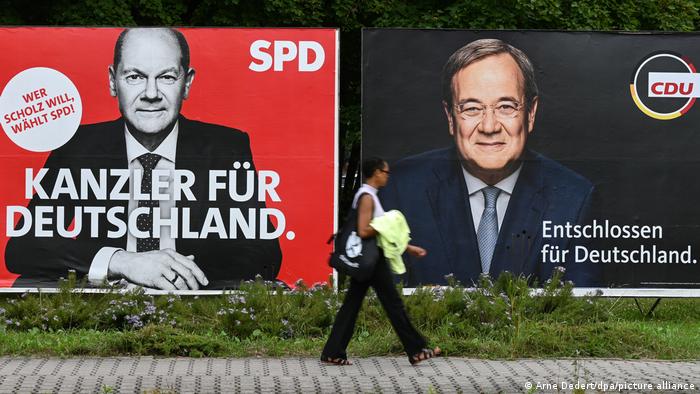 Germany's Social Democratic Party (SPD) looked to have pulled off a historic comeback in the general election on Sunday night, though it remains to be seen whetherits candidate, Olaf Scholz, has done enough to win the chancellorship.

Hourly exit polls on Germany's public broadcasters saw the center-left SPD edging marginally ahead of Angela Merkel's conservative bloc, whose chancellor candidate, Armin Laschet, has struggled through the election campaign.But, with an estimated 40% of ballots cast by mail and yet to be counted, the final result could still reverse that result.

Nevertheless, the center-right Christian Democrats (CDU) and their Bavarian sister party, the Christian Social Union (CSU) — which have governed Germany for most of its postwar history — stumbled to their lowest-ever result. Even if Laschet garners enough to eke out a slim lead, or even if he can form a coalition government as head of the second-biggest party, the outcome is sobering for Merkel's bloc as she retires after nearly 16 years in power.

A year ago, the SPD had been written off by many observers as floundering and out of contention. But their ratings in opinion polls increased steadily throughout the last stretch of the election campaign, producing what became one of the tightest races in postwar German history. Early in a tense and unpredictable election night, Scholz suggested that the result had "given him the strength" to form a coalition government.

Germany has voted, but reliable results not in yet

But Laschet made the same claim during the traditional election-night public broadcaster TV discussion among the major candidates. "No party is strong enough to do it alone," Laschet underlined during the broadcast. "That's why it's down to finding as many common issues as possible within a probable three-party alliance."

Awkwardly, neither the CDU nor the SPD will be able to form a two-party coalition government with their preferred partners, the progressive Greens, who came in third, and the pro-free market Free Democratic Party (FDP), which took fourth place. Hammering out a three-way coalition will mean long and drawn-out coalition negotiations as both big parties will be competing to get a third party to join them.

During the TV debate, Scholz offered a clear signal that, of the options available, he would favor a coalition with the Greens and the FDP. "Some parties gained more votes — the SPD, the Greens and the FDP — and other parties lost votes," he said, hinting none too subtly at the CDU's fall. "That sends its own message."

FDP leader Christian Lindner said his party "was and is ready to take power," pointing out that the FDP was already in coalitions in three state governments in Germany — including with the CDU, the SPD and the Greens.

Hinting at the FDP and Greens' status as kingmakers, Lindner also suggested his party should confer with the Greens first "to structure everything that comes afterward," since those two parties had challenged the "status quo of the grand coalition" currently ruling. In a rather noncommittal response, Green chancellor candidate Annalena Baerbock did not rule the idea out. 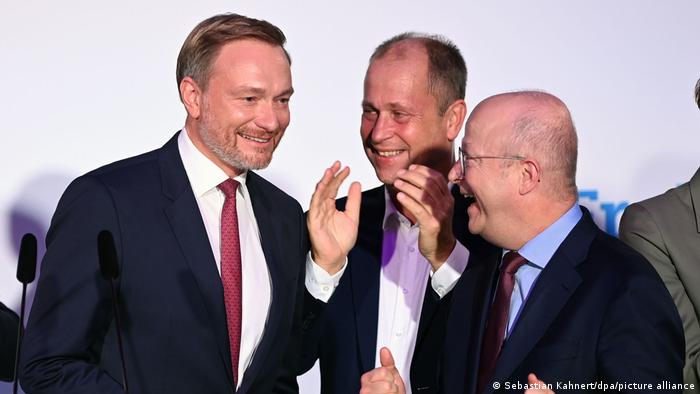 The election night proved something of a disappointment for the environmentalist Greens, who dared to put up a chancellor candidate for the first time in their history.

Forty-year-old Annalena Baerbock has likely led the Greens to their best-ever result in a federal election, but, given the fact that the party briefly led the polls back in May, and that surveys suggested that the climate crisis was the single most important issue in this election, the party had clearly been hoping for a stronger showing.

"It's obviously not a reason to be joyful," Baerbock said on public broadcaster ARD. "But it was right to challenge the CDU and to make clear that we need renewal in Germany. Democracy lives from having alternatives, and this gave the election campaign a completely different dynamic."

The two parties on the more extreme ends of the political spectrum found themselves weakened in Sunday's early results. Both the far-right Alternative for Germany (AfD) and the socialist Left Party have been damaged by infighting and a lack of a clear issue to drive public debate.

AfD candidate Alice Weidel took offense when one ARD moderator suggested that her party harbored an "ethnic-nationalist" wing and a more moderate pragmatic wing: "I distance myself a long way from that," she said, before insisting that her party was satisfied with the result — which showed, she said, that it had established itself in Germany's political landscape.

The Left party was left in the most desperate position — early results suggested that it might not clear the 5% hurdle required for representation in the Bundestag, and may have to rely on winning a few directly elected seats in Berlin to have any representation in Germany's parliament at all.

The socialists' poor showing effectively killed off the prospect that the CDU had been warning against for the past few weeks: that a vote for the SPD would allow the Left to sneak into government for the first time as part of a left-wing coalition. Now a centrist coalition of some stripe is the most likely outcome.

Angela Merkel's conservatives have suffered their worst post-war result. The center-left SPD now lead, projected results show. Both have said they are ready to form the next coalition. DW has the latest.

Germany's kingmaker, the FDP, is set to return to government

A German government needs a 50% majority in parliament, but no one party can get so much voter support. So they agree on coalitions — and the next government will be no exception. Here is an overview of the options.

A chance to be chancellor: Defining moments of the 2021 campaign