German election: The postal vote and fraud claims | Germany | News and in-depth reporting from Berlin and beyond | DW | 25.09.2021 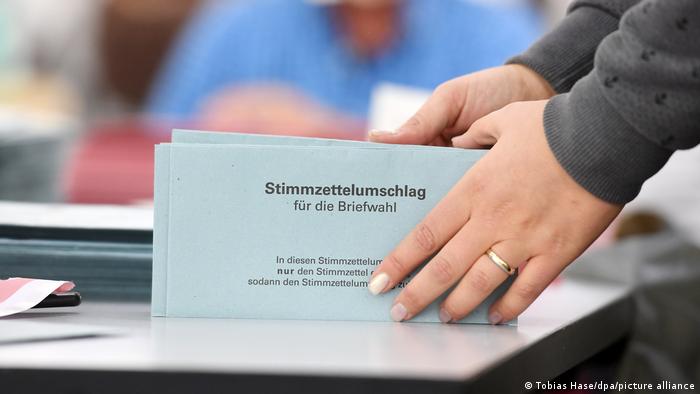 The opportunity to vote in the comfort and safety of their own home appeals to many German voters — especially when COVID-19 infection numbers are rising. Election organizers expect as many as 50% of the votes to be mail-in ballots in Sunday's election, a significant increase from the 28.6% in the last federal vote in 2017.

Mail-in voting was introduced in Germany in 1957, and until 2008 those wishing to post their ballots had to apply for permission and provide a reason why they couldn't show up at their local polling stations.

Supporters argue that postal voting is more inclusive and benefits groups such as disabled people, who may find it physically difficult to vote in polling stations that may not be completely accessible.

All eligible voters automatically receive election notifications by mail several weeks before the election, telling them where to go to cast their ballot on election day. They need to take the notification along to the polling station, but they can also use it to ask for an absentee ballot to be sent to their home address.

These requests can then be sent by post or delivered in person. All mail-in ballots are registered, making it impossible for any voter to vote both by post and in-person. Unlike most of the United States, German absentee ballots must actually arrive at the polling center before election day to be counted. Postal voting is especially popular in Germany's urban areas and in the west of the country.

In both Germany and the US, the number of people choosing to vote by post had already been growing even before the pandemic, with roughly a quarter of voters in both countries mailing in their ballots. During the last federal election in 2017, Bavaria was the German region with the highest mail-in rate, with 37.3% of voters. In 2020, the US reached a new high for mail-in voting, with 46% sending in their vote by mail. Because of COVID, Germany is also expected to set new records this year.

Voting systems in both countries have been subject to similar criticisms — including from former President Donald Turmp in the US — but they are structured differently. "The biggest difference is having a stable voter register based on the register of residents," Federal Returning Officer Georg Thiel told DW. Where Americans must actively register to be able to vote, Germany's system of recording citizens' place of residence ensures they are automatically registered. This difference means that voter lists are regularly updated, including when people die or move, making it more difficult to falsely add people to the database.

Checking the names of ballots against the registry and ensuring that only one vote is cast per entry is the main part of Germany's effort to prevent election fraud. Measures used in the US, where no such resident register exists, measures like signature verification and ballot paper evaluation are not used.

How absentee ballots are kept safe

In Germany, mail-in votes are checked against the voter registry as they arrive and kept in a locked ballot box in a secure location until election day to prevent tampering. The ballot box for in-person votes is also locked and watched by at least three people from the electoral board to make sure no unauthorized ballots are added.

When voting ends at 6 p.m., the ballot boxes are then opened in the presence of all members of the electoral committee and observers and are counted.

Those results are then sent to the electoral district and up the ladder to the federal returning officer. They check the results against historical outcomes, and if there appears to be any sort of anomaly they will trigger a review of the ballots. The Federal Electoral Commission, which includes the federal returning officer, representatives of the political parties in German Parliament and the judges of the Federal Administrative Court, certify the election results.

US citizens in Germany fear for their postal votes

In recent months, members of the far-right Alternative for Germany (AfD) party have echoed Trump's unsubstantiated claims of fraud during the 2020 US presidential election. AfD Bundestag member Stephan Brandner has accused the mainstream parties of planning to rig the election, calling absentee voting "undemocratic and unconstitutional."

"Postal votes can be manipulated in many ways," he claimed back in January.

The Berlin Social Science Center (WZB) conducted research on German absentee voters during the 2017 general election, and revealed it was primarily the "well-educated and relatively affluent" voters in western Germany who opted for the postal vote — especially the economically well off, self-employed, pensioners and students. These characteristics are also related to party choice, according to the WZB.

The study also found that the conservative Christian Democratic Union (CDU) and Christian Social Union (CSU), the neoliberal Free Democrats (FDP) and the Greens got a higher percentage of support from mail-in ballots. The AfD, meanwhile, performs relatively poorly.

"That leads me to suspect that the AfD attack on postal voting is a tactical maneuver," said Klaus Stüwe, a political analyst at the Catholic University in Eichstätt-Ingolstadt.

The main type of manipulation for mail-in ballots in Germany is believed to take place in homes, where someone may try and influence how another person votes or fill out their ballot for them.

"There has never been any evidence of a systematic attempt from parties to create a better election result for themselves," said political science professor Joachim Behnke of Zeppelin University in Friedrichshafen, southern Germany.

"Ensuring a correct and safe procedure in counting the absentee ballots has been well-established for decades. So those votes are just as safe as the ones cast in person on election day," said Stüwe. "Don't forget that vote rigging is a criminal offense."

Germany is in the middle of an election year that will see unprecedented use of mail-in ballots. Hacker attacks against politicians are also expected. Election authorities have rejected claims of potential voter fraud.

Like many voters all over the world, Germans can contest the results or the procedure of a general election. DW tells you how they do it and who is involved.