German Airline Criticized for Kabul Flights | News and current affairs from Germany and around the world | DW | 01.09.2003

German airline LTU became the first western carrier to resume non-stop flights to Afghanistan in August. But a German pilots' group says the flights are reckless because the planes are exposed to shoulder-fired missiles. 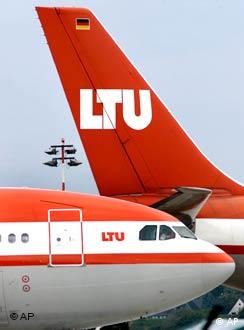 LTU now flies from Düsseldorf to Kabul once a week

LTU's once-weekly flight from Düsseldorf to Kabul takes six hours and has been welcomed by Germany's 300,000-strong Afghan community. But the airline has come under scrutiny from pilots' association Cockpit, which has described the flight as irresponsible and unsafe because the company's have no protection against shoulder-fired missiles known to be in the hands of Taliban fighters and al Qaeda in the region.

LTU's spokesperson Marco Dadomo said the criticism from the Pilots' Association Cockpit is one-sided and arbitrary. He said terrorist attacks could happen anywhere in the world and Afghanistan isn't the most endangered country.

"We've been working together with the State Department and local authorities for more than a year," he said, stressing that "(LTU) believes the security system in Kabul is of a standard that allows us to operate this flight."

Speaking at a recent press conference, Michael Schmunk, the German government's special coordinator for Afghanistan, said he hoped the flight would herald a fresh wave of international engagement, while LTU flight operations director Josef Moser maintained that the situation in the country is now stable enough to attract business and politicians.

But Georg Fongern of the Pilots Association Cockpit countered Schmunk's claims, saying that not even the German air force would fly into Kabul without missile warning systems on their planes. Factional fighting continues in Afghanistan, and there have been sporadic strikes on U.S.-led coalition forces in the country. So far, security in Kabul has been provided by an international peacekeeping force currently commanded by Germany and the Netherlands.

According to Fongern no passenger airline in the world other than Israel's El-Al is equipped with a missile detection system. Nor, he claimed, does LTU's Airbus 330-200 have the appropriate navigational equipment for taking off or landing in Kabul's rugged terrain. Visibility at Kabul's airport is often obstructed by bad weather and pilots can't even always see the runway, increasing the risk of hitting a mine in the surrounding area.

"According to the German Air Force, there are mines about 20 meters parallel to the runway," he said. "Just imagine what would happen if an aircraft ran into a minefield."

Fongern also expressed concern that security is insufficient at the Kabul terminal. "Anybody can enter the restricted area without being checked. For many reasons, it's dangerous flying into Kabul," he warned. He went on to accuse LTU of failing to operate according to international standards for civil aviation.

But LTU spokesman Dadomo said the company would continue to operate its flights as long as the security situation in Kabul remained stabile. "We're in daily contact with the State Department, the Department of Defense and military authorities," he stressed. "If we have any indication that security is deteriorating, we will stop our flight immediately."

Terrorism experts say Thursday's attack in Kenya used a weapon that was "cheap, nasty and easy to use." It certified fears that a similar attack could occur on European soil. (Nov. 28, 2002)