Georgian presidential front-runner aims at multilateralism to thaw frozen conflicts | Europe | News and current affairs from around the continent | DW | 31.10.2018

Born in exile, the career diplomat Salome Zurabishvili faces a runoff vote after a narrow lead in the first round. In an interview with DW, she stressed the importance of democracy and multipartyism in her country. 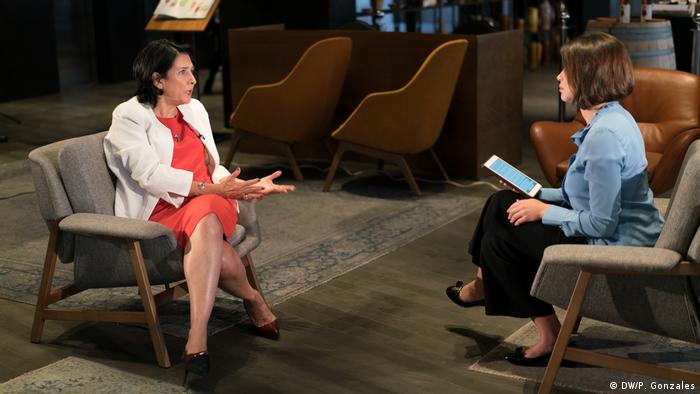 Salome Zurabishvili is an independent candidate for the Georgian presidency endorsed by the Georgian Dream party. Born in Paris to a family of Georgian emigres, she was educated in France and served as a career diplomat, and was appointed ambassador of France to Georgia in 2003. She left that post to become a foreign minister in then-President Mikheil Saakashvili's government (2004-2006). Expected to emerge victorious in last Sunday's elections, she is now facing a runoff election after narrowly placing first.

DW's Zhanna Nemtsova spoke with Zurabishvili about how the country has changed since Saakashvili's era and what she thinks about recent criticism of her French accent in Georgian. 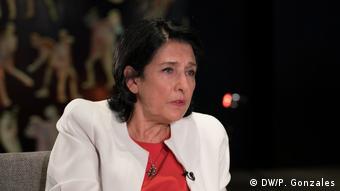 Salome Zurabishvili: I am independent. I presented my candidature before the ruling party made a decision whether to present one of their own or to support someone. That doesn't change me and my principles.

So you are not controlled by Bidzina Ivanishvili?

You quit politics in 2010 and you were quoted as saying there is no effective democracy in the country. Has Georgia become more democratic in a decade after Saakashvili stepped away?

So the fact that Ivanishvili controls everything does not prevent Georgia from stepping away from democratic principles?

He doesn't control more than Saakashvili did – in his time he controlled also the parliament. Today there are two strong opposition parties in the parliament that have their say. There are some local authorities that are not controlled and the media are not controlled at all, although they used to be one hundred percent in the hands of Saakashvili. Today you have five television stations that are in the hands of the opposition. So we are now in a free-expression democratic country, where maybe the balance of power is not yet good enough, where there should be more multipartyism. That's what Georgia has always wanted to be heading for.

Your program touches upon many different issues, including the problem of occupied territories (Editor's note: Abkhazia and South Ossetia declared their independence from Georgia in 2008, which was recognized by Russia) and the NATO accession. Do you really think that you can bring some change in this respect?

The president has, if anywhere, a big power of representation in the foreign policy. And I know this field quite well from my past posts in France and Georgia. I know that it depends a lot on personal initiatives, ideas and contacts - three things plus the experience which I have. But now in this case it will depend on our relationship with our European and American partners. It doesn't depend on a direct new type of relationship with Russia that would be "go alone without those partners.” And we have to try to figure out with our partners what would be the new ways for Georgia to move from this rather stagnant situation where we couldn't do anything with these occupied territories.

It's almost every other day that we have people abducted from there. We have to discuss with the European mission (Editor's note: EU Monitoring Mission in Georgia) what additional measures could be taken without demarcating a border because that's our red line.

You were born in France and were a French career diplomat who became a Georgian politician. Your relatives moved to France in the beginning of the 20th century; they were political emigrants. Why were they forced to flee the country back then?

A discovery: Literature from Georgia

And then the Georgian official immigration had to move to France, which was a country that continued to recognize the government in exile the longest, until 1974. But the treaty that France signed with Russia in 1974 included a clause that said that France had to stop officially recognizing the government in exile. Still, the immigration stayed in France, which remained a main host country for the Georgian political emigration.

What could you respond to those who criticize you or just make a remark that your Georgian is not perfect, that you have some French accent?

The first time I came to Georgia I was 36 years old. I had learned Georgian in my family and then by myself by reading and translating. And during my youth we had practically no contact with Georgians except for those living in the immigration. There was no social network, there were no TVs. So the language was really "home based." So I'm quite proud of it. I've been living in the country for 16 years, I've been a foreign minister, I've been elected as a member of the parliament and it's very interesting that the criticism has started just two months ago. I have an example of the Latvian President [Vaira] Vike-Freiberga who returned to her country, Latvia, from Canada. She was also criticized for her language. And she was elected president and brought Latvia to the EU and NATO. So I'm ready to be criticized if I can manage the same result.

Georgia: A land whose inhabitants see themselves as undeniably European, yet are far from united on what 'Europe' even means. Krsto Lazarevic visits the country as it takes the spotlight at the 2018 Frankfurt Book Fair. (07.10.2018)

Georgia is the guest of honor at the 2018 Frankfurt Book Fair. The small Caucasus republic presents richly diverse literature. (08.10.2018)