My Europe: Georgia fights over its future | Europe| News and current affairs from around the continent | DW | 07.10.2018

Georgia: A land whose inhabitants see themselves as undeniably European, yet are far from united on what 'Europe' even means. Krsto Lazarevic visits the country as it takes the spotlight at the 2018 Frankfurt Book Fair. 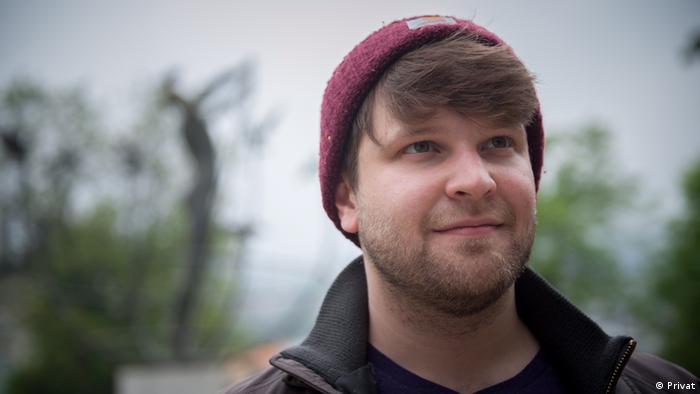 Georgia is the guest of honor at this year's Frankfurt Book Fair, where from October 10-14 it will present its literature and culture to the visitors, book critics, authors, publishers and politicians that flock to the yearly German-language literary convention. In the lead-up to the book fair's opening, journalist Krsto Lazarevic shares his impressions in a guest column of a country that is full of culture, contradictions and change.

Georgia is situated between the Greater and Lesser Caucasus mountain ranges, but it wouldn’t be out of place in the Balkans. A small country at the edge of Europe, its mountains and bad roads make it seem a lot bigger. People here are very hospitable; they make you eat until you’re fit to burst and keep refilling your glass of home-made schnapps. Georgia and the Balkans are pretty similar. The mountains in Georgia are a bit higher, the wine is better, and the hype rather bigger.

Ask them whether they consider themselves part of Europe and Georgians will stare at you in astonishment. Then they'll pull a face, as if you'd asked them whether they wash their hands after going to the toilet: "Yes, of course. What do you think?" 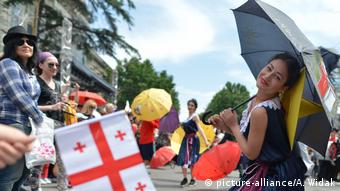 Georgians are proud to be European, despite their geographical distance from Europe

To avoid any shred of doubt, every government building displays the European flag. It's just a shame the EU doesn't want Georgia because parts of the country are occupied by Russia. Georgians can hang out all the flags they like with the five-pointed stars on the azure-blue background: They may be participants in the Eurovision Song Contest, but their European patriotism is not enough for the EU.

Describing a place as "contradictory" is not particularly original, but there’s no better word to describe the capital, Tbilisi. Coming out of a vegan restaurant in the center of town, you find yourself a few seconds later standing in front of a butcher selling pig's heads and suckling piglets. The suckling pigs are stretched out under the hot sun. Bottles of ice in their bellies are not enough to stop a whiff of putrefaction from lingering in the air. 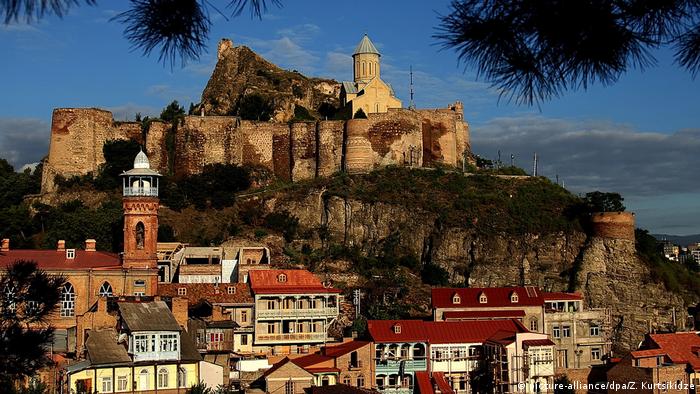 Three metro stations further on, an old textile factory has been transformed into a hipster paradise. Here you will find backpackers, artists and young entrepreneurs openly smoking joints outside. A few months ago the law was changed so that you can now smoke dope in Georgia without risking punishment. Getting caught with tab of Ecstasy can still land you in prison for up to eight years, however. 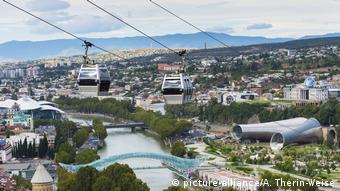 The capital Tbisili is also full of modern and adventurous architecture

Less than five minutes' walk from the factory and its graffiti-covered walls, right-wing extremists are standing around outside a metro station, gathering signatures.

"What are you collecting signatures for?"

"Muslims are a threat, and we don’t want them in our country."

"But there are a lot of Muslims in Georgia, aren’t there?"

"Yes, that’s why they have to leave."

"But they’ve lived here for centuries. Where do you want to send them?"

As argumentation goes, this leaves something be desired. Nonetheless, the men have already collected a lot of signatures.

I haven't met many Muslims in Georgia, but I have met a lot of Orthodox priests. They're highly respected and enjoy a great many privileges. They don't pay taxes, people admire them, and they're apparently allowed to jump the line at the supermarket. After communism was thrown into the dustbin of history, religion filled the vacuum in Georgia. Criticism of Patriarch Ilia II, the current leader of the Georgian Orthodox Church, is tantamount to blasphemy.

Read more: 'We give people a voice that would otherwise be overheard' 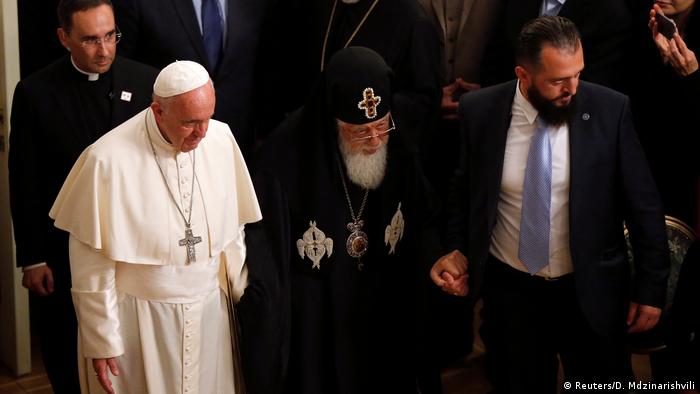 Patriach Ilia II (center), the leader of the Georgian Orthodox Church, met with Pope Francis in 2016

There is, however, another Georgia — one that bothers the clerics. Inside the Bassiani nightclub, drag queens are kissing on the dancefloor. One of them says, "This is freedom for a night. Outside is enemy territory." Outside, openly homosexual people are frequently beaten up — sometimes by priests and police officers — and the perpetrators go unpunished.

Back in May, a minor revolution kicked off in Bassiani. The soundtrack of this revolution was techno. Old factory buildings and run-down Soviet architecture are the perfect surroundings for hardcore electronic music. In the middle of the night, hundreds of police officers with helmets and machine guns stormed the nightclubs Bassiani and Café Gallery. The next day, thousands of people demonstrated against the raid by gathering in front of the parliament building and holding a rave.

Almost everyone was surprised by what happened next. The prime minister and his government resigned and were replaced by others from the same party. This happened at the behest of the all-powerful oligarch and former Prime Minister Bidzina Ivanishvili. The "techno revolt" was successful because the oligarch — the one who makes the decisions — agreed with the demonstrators' demands: Western freedoms and a country more closely aligned with Europe.

What does 'Europe' mean?

This wasn’t just a raid on a couple of nightclubs; it was a culture clash between progressives and reactionaries. For the time being, the progressives have won. Georgians want to be part of Europe, but what exactly does that mean? For most Western Europeans, Europe represents liberal values. Those who took part in the techno revolt feel the same way.

But for most Georgians, and many Eastern Europeans, "Europe" signifies the Christian West, protection against Russia and money from Brussels. What they don't want is the liberal modern world — the one where minorities, dissenters and people with alternative sexual preferences are treated as equals. At least, the majority of Georgians don't want this.

That's no reason to give up, though. Georgia is changing. The fight for a better future has only just begun.

Krsto Lazarevic was born in Bosnia-Herzegovina and fled as a child with his family to Germany. Today he lives in Berlin, where he works as a journalist and writes for various German-language publications.

Ten years after the war between Russia and Georgia, villagers near the breakaway region of South Ossetia still live under the strain of the conflict, dealing with border issues and Russian patrols. Emily Sherwin reports. (08.08.2018)

Georgia - a new world for tourists

Sometimes you find yourself in a country which is seen a tourism insider tip and you can't help but wonder why. That's how DW reporter Kerstin Palzer felt when she visited the country wedged between Europe and Asia. (29.09.2016)