Could Hungary′s transit zones for refugees be a model for Germany? | Europe| News and current affairs from around the continent | DW | 04.07.2018

Could Hungary's transit zones for refugees be a model for Germany?

Hungary detains its asylum-seekers in transit zones on the EU's external border. Would that approach work on Germany's border with Austria, as the country's conservative leaders are planning? DW's Bernd Riegert reports. 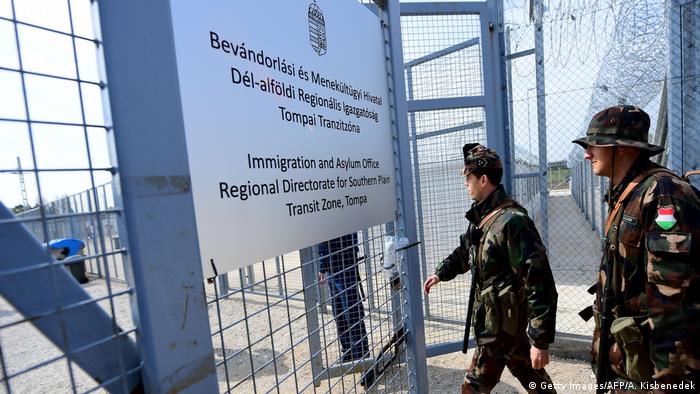 The transit zones that German Chancellor Angela Merkel's conservative Christian Democratic Union (CDU) and its Bavarian Christian Social Union (CSU) sister party agreed to after a heated debate over asylum policy already exist in Hungary. Asylum-seekers there aren't allowed to enter the country directly, but are stopped at two crossing points along a border fence with Serbia. They are then sent into the transit zone, a closed-off container village.

According to the Hungary Helsinki Committee (HHC) aid group, only one person per crossing point is allowed to enter the transit zone each day, a figure denied by a spokesperson for Hungary's government. "It's not our fault that so few people want to come to Hungary," Janos Lazar, the head of the prime minister's office, said in February.

The HHC estimates that there are roughly 4,000 migrants on the Serbian side of the border, waiting to file for asylum in Hungary.

Transit into no man's land

In the transit zone, which Hungary has declared a no-man's-land, officials then check whether the asylum-seeker has been registered in another European Union country or whether the asylum application is obviously unfounded for other reasons. This process usually only takes a few hours, but can last up to 15 days. 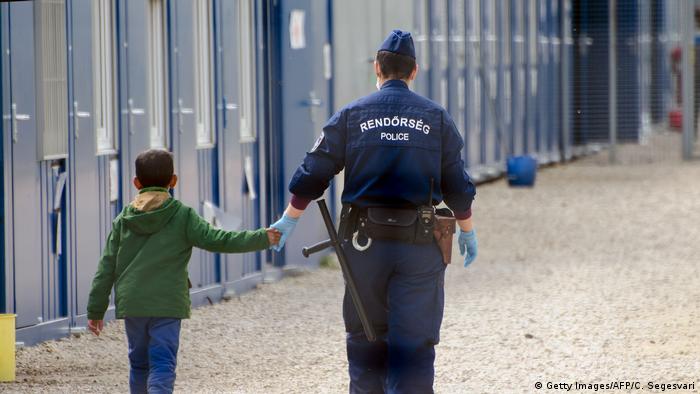 If asylum-seekers turn out to be already registered in the Eurodac asylum database from an application in another EU country, as part of the bloc's Dublin Regulation on asylum policy, they are taken directly to the Serbian side of the border fence and banned from re-entering the entire Schengen area.

In theory, the rejected applicant is entitled to appeal the decision, but this only happens rarely, according to the HHC. In most cases there is no time left for such a step, or asylum seekers have no legal assistance nor access to the necessary procedures.

If the asylum application is accepted and processed, applicants are placed under surveillance in the transit zone, which they are not allowed to leave. The following asylum procedure takes three to six months in Hungary, including a judicial review.

Rejected asylum seekers are returned to Serbia from the transit zone. The European Court of Human Rights in Strasbourg condemned this practice back in March 2017. At the time, the judges sided with two asylum-seekers from Bangladesh who were held in a transit zone for 23 days and were finally brought to Serbia. The court called their internment illegal. The deportation to Serbia was also criticized because there was a risk of a "chain deportation" to Greece. Hungary has appealed this judgment. A final verdict is still pending.

The restrictive approach to asylum procedures means that the number of cases in Hungary is close to Prime Minister Viktor Orban's ideal of not letting anyone in. In the first four months of this year, 2,363 migrants were rejected directly at the entrances to the transit zone. A report from the HHC found only 325 persons were able to apply for asylum. In on-going asylum procedures, 326 applicants were rejected and immediately deported, while 267 people were granted refugee or protection status.

Despite these figures, Orban has expressed concern over mass immigration and declared a "state of emergency" over the issue. This trick is the only way for Hungary to legally detain asylum-seekers under EU asylum law, which states that detention in transit zones can only be considered an exception in cases of exacerbated migration pressure.

In order to be able to immediately reject asylum seekers who somehow enter Hungary, the Hungarian government has introduced the so-called eight kilometer rule. Any migrant found up to eight kilometers (five miles) from the border can be taken to the transit zones without further inspection.

Human rights organizations report that sometimes migrants are arrested outside the eight kilometer zone somewhere in Hungary and taken across the border into Serbia without any further examination. Lawyers disagree on whether transit zones in Hungary can be considered a no-man's-land at all, since the term does not exist under international law.

The EU's commissioner for migration, Dimitris Avramopoulos, visited Hungary in March 2017 and called on the government to respect standards of humane accommodation. Avramopoulos did not directly criticize the idea of transit zones, as interior ministers from EU states had essentially decided a year earlier to set up such areas at the bloc's external borders and to copy the Hungarian model. 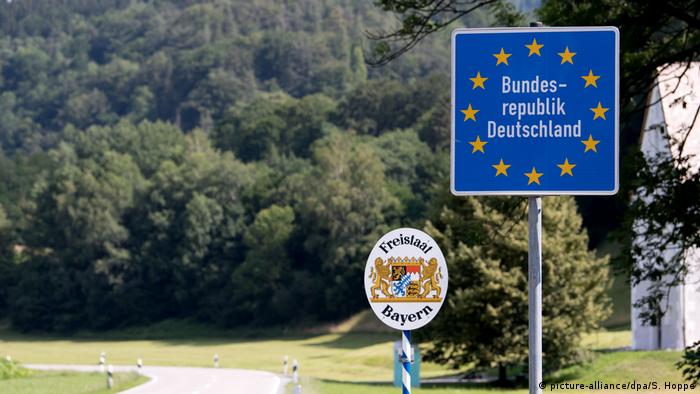 For transit zones to work, it is imperative to seal off the border with a fence or very tight border controls. This is the only way to keep asylum-seekers and migrants from entering the country and to ensure they register in the transit zones first and file their applications there.

In the case of Germany, this would mean that the border with Austria would have to be closed off and controlled along its entire length of 817 kilometers. But this wouldn't comply with the rules of free movement within the Schengen area.

Hungary is also returning the asylum-seekers it rejects to Serbia, a non-EU state considered a safe third country. Germany, on the other hand, would send people from its transit zones back to the Schengen states of the Czech Republic or Austria, who would not have to accept them. The only way to guarantee that rejected asylum-seekers could stay in Austria and the Czech Republic would be for the countries to sign corresponding agreements with Germany, but both nations have ruled this out.