A woman in Singapore who contracted the coronavirus during her pregnancy has reportedly passed on antibodies to her baby. Meanwhile, North Korea is stepping up anti-virus controls at its borders. Follow DW for more. 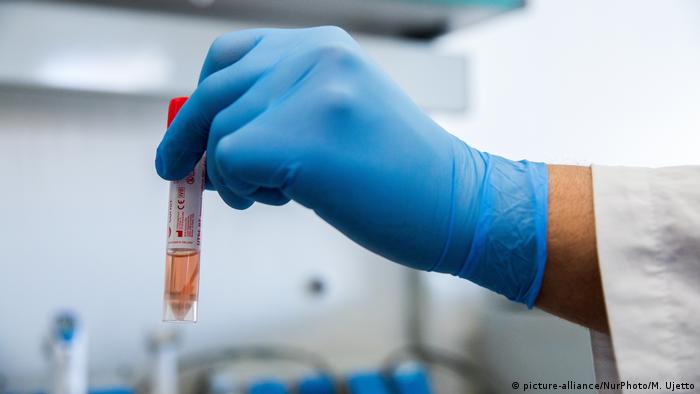 A Singaporean woman who was infected with the coronavirus in March, when she was pregnant, has given birth to a baby with COVID-19 antibodies, according to the Strait Times newspaper.

Celine Ng-Chan told the paper that her son was born this month with antibodies against the virus, and that her doctor suspected that she had transferred them to him during the pregnancy.

The World Health Organization says it has not yet been established whether a pregnant woman with COVID-19 can pass the virus to her baby.

Doctors in China have reported that antibodies in babies born to women with the coronavirus tended to decline over time. Meanwhile, a medical study published by US doctors last month found that transmission of the virus from mothers to newborns is rare.

Pregnancy in a pandemic

COVID-19 Special: Pregnancy in a pandemic

Coronavirus news from elsewhere in Asia:

Authorities in Hong Kong warn that a new surge in coronavirus cases is rapidly getting worse. The territory logged 115 new infections on Sunday – its highest tally in four months.

Since the start of the pandemic, 6,239 people have been infected with the coronavirus in Hong Kong, and 109 have died. The outbreak peaked on July 30, when a record 149 cases were reported.

The recent spike in infections forced authorities to push back the planned launch of a "travel bubble" between Hong Kong and Singapore. It also led to the closure of bars, nightclubs and entertainment venues.

North Korea is building a blockade wall near the border with South Korea and boosting controls in coastal areas to prevent the coronavirus from entering the country.

Pyongyang has not officially reported a single case of COVID-19 so far. But officials cited by state media said more anti-virus units were being mobilized as part of efforts to "completely remove uncivilized and unhygienic elements that could help make room for the spread of an epidemic'' during winter.

Authorities in South Korea have announced a ban on end-of-year parties and said saunas and some cafes must close after a rapid increase in coronavirus cases. The country reported 450 new infections on Sunday, following tallies of over 500 for three consecutive days in a row.

Regulators in India are investigating an adverse reaction during AstraZeneca's vaccine trial. A 40-year-old man said he suffered "neurological and psychological" symptoms after receiving the vaccine during a trial, which is being assisted by the Serum Institute of India.

Samiran Panda of the Indian Council of Medical Research told Reuters news agency there was "no immediate cause for concern at this stage."

Children in Iraq have returned to socially-distanced classrooms as the country reopened schools. The Education Ministry said students will be attending lessons only one day per week according to a rotational system to prevent crowding. Iraq has the second-highest number of coronavirus deaths in the Middle East with more than 12,000.

German President Frank-Walter Steinmeier has sought to reassure citizens that the pandemic "won't take the future from us."

"The advances in medical research give hope that the pandemic won't dominate our lives forever," he wrote in a letter published in the Bild am Sonntag newspaper.

Germany has imposed a partial lockdown, with Christmas markets and large family celebrations off the cards for this year's festive season.

The number of confirmed COVID-19 cases in Germany rose by 14,611 on Sunday, according to data from the Robert Koch Institute (RKI) for infectious diseases. Germany's health minister has said that a coronavirus vaccine could be approved by mid-December.

Read more: Coronavirus: No Christmas markets — but some mulled wine 'to go'

"The higher the infection numbers, the harder it will be to introduce steps for reopening," Kurz told the Kleine Zeitung newspaper. "We will have to live with further massive restrictions after December 7."

Kurz said the government planned to start reopening shops and schools, but it was not yet clear when or if ski resorts would be able to accept tourists.

Read more: Skiing in Ischgl — despite the coronavirus pandemic

Restaurants and nonessential shops in the Czech Republic will be allowed to reopen from Thursday due to a drop in new coronavirus cases. Health Minister Jan Blatny said businesses must still limit customer numbers to allow social distancing. He added that a nighttime curfew would also be lifted.

Croatia's prime minister, Andrej Plenkovic, has gone into quarantine after his wife tested positive for the coronavirus. A government spokesman said the conservative premier would be in isolation at home for 10 days, and would continue performing his duties from there. Croatia toughened measures to contain the virus this week — including closing cafes and restaurants — amid an increase in infection numbers.

How can COVID vaccines be distributed fairly?

How can coronavirus vaccines be distributed fairly?

The British government says it has secured 2 million more doses of Moderna's COVID-19 vaccine candidate, in addition to the 5 million doses already agreed to in a deal with the US pharma company two weeks ago. The vaccine is expected to be available in Europe as early as spring.

Turkey recorded a new record rise in coronavirus deaths for the seventh straight day, reporting 185 fatalities in the last 24 hours. More than 13,500 people have died from the disease in Turkey since the beginning of the pandemic.

The United States may see "surge upon surge" of the coronavirus in the coming weeks, the country's top infectious disease expert Anthony Fauci said.

Fauci, who appeared on ABC's "This Week" and NBC's "Meet the Press" programs, said it's "not too late" for people to help stop the spread of the virus by wearing masks. The US reported 151,245 new cases on Sunday and has recorded more than 13 million infections and 266,000 deaths since the pandemic began.

Domestic abuse spikes during the holidays and the coronavirus lockdown will only make things worse. One quarter of all women experience abuse in their lives and lockdown measures are making it harder to get help.