Coronavirus vaccine — how to distribute it around the world? | World| Breaking news and perspectives from around the globe | DW | 27.11.2020

Coronavirus vaccine — how to distribute it around the world?

A long-awaited coronavirus vaccines are about to be approved and distribution might start soon in Germany and other European nations. But major distribution challenges will leave poorer nations waiting longer.

How can COVID vaccines be distributed fairly?

How can Coronavirus vaccines be distributed fairly?

Several vaccines are awaiting approval by health authorities. But even before the official go-ahead has been given, the United States and European countries have signed contracts and secured the rights to billions of doses from several companies, including Pfizer/BioNTech, Moderna, AstraZeneca, Johnson and Johnson, CureVac, SanofiGSK.

If the vaccines all get approval, the European Union has secured more than enough vaccines for its population, even though two doses have to be administered to induce immunity.

But what about less affluent countries, which can not afford to make swift direct deals with pharma companies?

They will be dependent on COVAX, a program led by the World Health Organization, Global Vaccine Alliance Gavi, and the Coalition for Epidemic Preparedness.

It was established in order to accelerate the development and equal distribution of vaccines around the world.

How do vaccines work?

COVAX pools funds from states and nonprofit organizations to buy and distribute vaccines. Although the US and Russia do not contribute to COVAX, the organization claims to have already raised $2 billion, with around $500 million coming from the European Union.

COVAX plans to provide a billion doses of coronavirus vaccines to low- and middle-income countries by the end of 2021, covering about 20% of their population.

"It is going to be a historical effort of heavy lifts to actually make all of this happen", Dr. Frederik Kristensen from the Coalition for Epidemic Preparedness Innovation told DW.

The World Health Organization has said it is going to prioritize countries according to their "fair allocation program." This means that countries, where there is a bigger threat from COVID-19 to the health system, will be first in line.

Pfizer and Moderna have their factories located in the United States, and parts of Europe. So storage and shipping the vaccines to other continents will be a major challenge.

Pfizer's product will require ultra-cold storage of -80 degrees Celsius, for which special refrigerators are needed, which are not widely available across Asia and Africa for now.

But even with vaccines that do not need to be stored at extremely cold temperatures, distribution is a major challenge. A recent study from the German logistics company DHL predicts that around 15.000 airplanes are going to be needed to distribute coronavirus vaccines to the entire world.

Several countries in Latin America are relying heavily on vaccines like Sinovac from China and Sputnik from Russia: The vaccine Sputnik V was tested in Brazil and Argentina, and those governments have secured delivery of the Russian vaccine in return.

COVAX could benefit most from British-Swedish company AstraZeneca, since their vaccine would not only be easy and cheap to produce but also does not require extreme-cold storage. If AstraZeneca's efficacy in preliminary results holds up under additional testing and doubts over study results can be cleared up, it could well be a game-changer for countries in Africa, Asia, and Latin America. 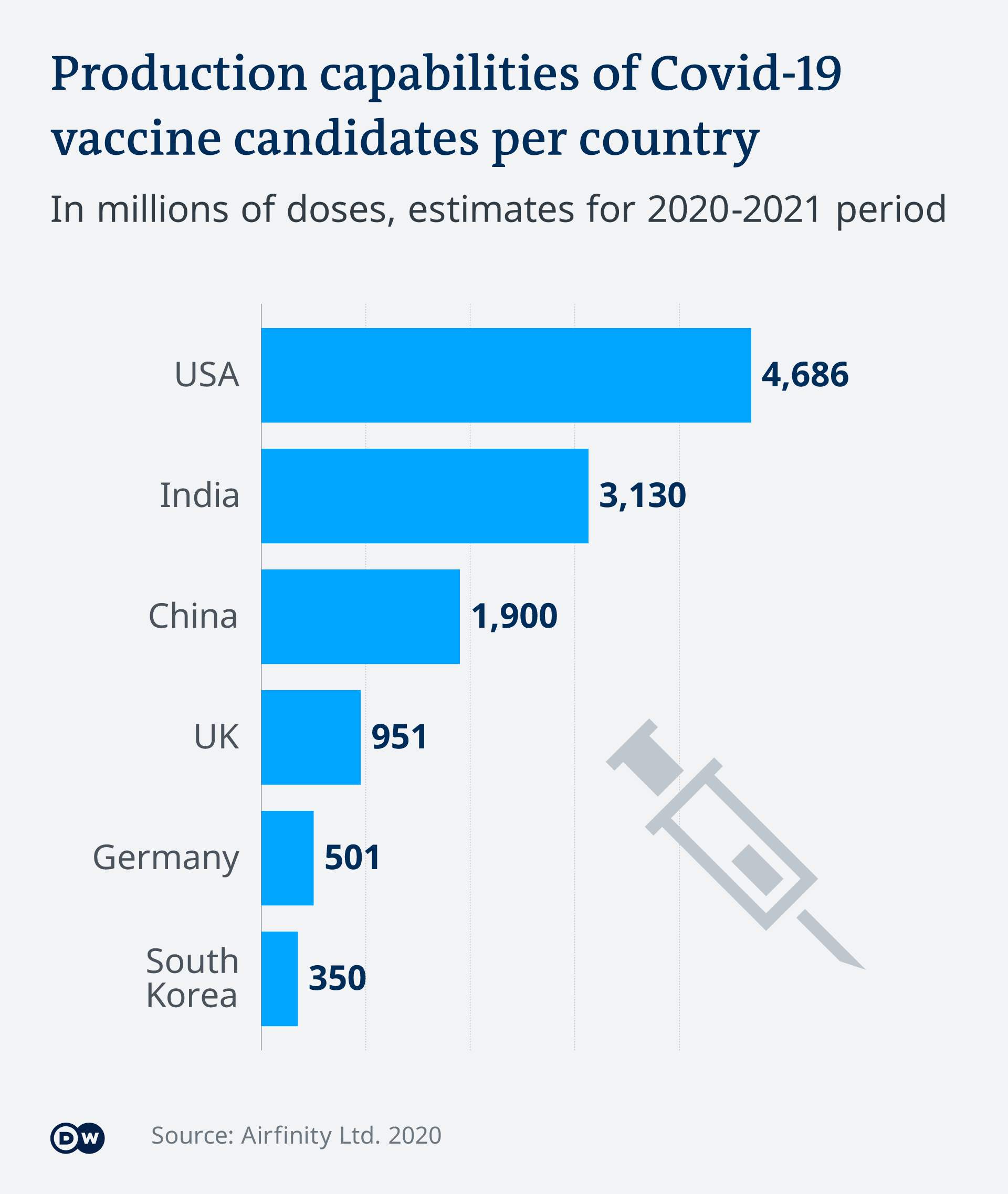 AstraZeneca aims to produce a billion doses at the Serum Institute of India, which is the world's largest vaccine manufacturer.

Read more: China is the winner in the year of the coronavirus

This has been a major focus of the COVAX program. "Production in at least two different countries for each of those vaccines is part of the plan," says COVAX chief Kristensen. "So, these are all efforts to both scale-up manufacturing to meet the needs, but also to be able to move the manufacturing from one geographic location to another so as to be closer to where the needs are."

Rasmus Bech Hansen, CEO of data analytics company Airfinity sees the COVID-109 pandemic as a valuable test case for the future: "It might make sense to now start thinking about how we develop these capabilities to produce vaccines more broadly, globally," he told DW.

"I think that we should use this pandemic to try and solve some of these systemic problems of vaccination."

How can Coronavirus vaccines be distributed fairly?