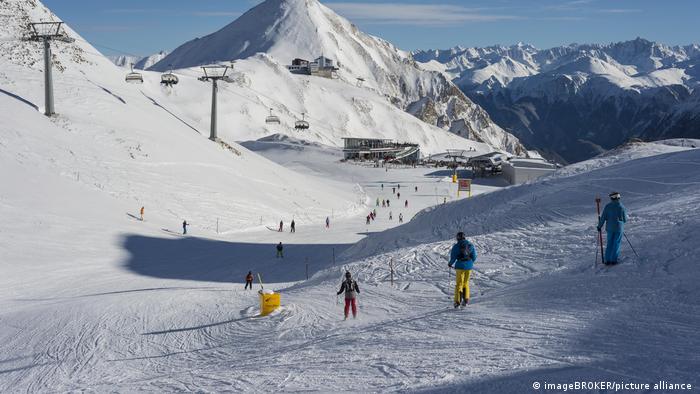 Germany wants to close ski slopes across Europe as part of the fight against coronavirus, Chancellor Angela Merkel said on Thursday.

"The ski season is approaching", she told lawmakers in the German Parliament, the Bundestag. "We will try to reach an agreement in Europe on whether we could close all ski resorts."

Many German and foreign holidaymakers flock to the southern Alpine state of Bavaria over the winter break to enjoy its pristine ski slopes.

"I would prefer to have a common agreement on a European level: no ski lifts open, no (ski) holidays anywhere," he said. Berlin wants to keep Europeans off the piste until January 10.

European ski resorts are widely believed to have been coronavirus hotspots, helping spread COVID across the continent.

Meanwhile, Germany's skiing association DSV urged German politicians to reconsider their plans, pointing to hygiene and distancing measures that have been put in place in recent months.

"A Germany-wide or even a Europe-wide ban on skiing sports would definitely not be the solution, it would be the opposite — it would unnecessarily make the already difficult situation … even more difficult." the association said in a letter, which was also endorsed by German snowboarders.

"Winter sports give people stability, motivation, perspective and they also provide many people with a job," they said.

Who else wants to shut the slopes?

Italian Prime Minister Giuseppe Conte has already called for an EU-wide shutdown of the continent's ski slopes at a time when Europeans would normally be heading off for their traditional winter break.

"If Italy decided to shut down all its ski lifts without any support from France, Austria and the other countries, then Italian tourists would risk going abroad and taking the contagion back home," he said in an interview earlier this week.

"The president had perhaps made a precipitous announcement and it is very prejudicial for the economy of the Alps," said Jean-Luc Boch, who leads the national association of mountain stations, known by its French acronym ANMSM.

Austria has already rejected the idea of an EU-wide ban. Austrian Chancellor Sebastian Kurz said that skiing was part of his country's "national identity" and that winter holidays would go on, albeit without apres-ski parties.

"If that is what the EU really wants, it will also have to pay for it," Blümel said.

Switzerland is not an EU member. Its ski resorts are going to stay open, although police are enforcing anti-COVID measures such as wearing masks and social distancing.

The Swiss industry is hoping for an influx of European tourists over Christmas after Switzerland recently lifted quarantine requirements for people arriving from most of the continent.

"In Switzerland, we can go skiing, with protection plans in place," Swiss Health Minister Alain Berset told reporters on Thursday.

Brussels suggested that the choice would be left to national governments.

"This is not European competence," said EU Commission spokesman Stefan de Keersmaecker on Thursday. "Obviously, there is no one-size-fits-all approach to gradual and science-based and effective lifting of the containment measures."

At the same time, De Keersmaecker urged a degree of coordination and warned that "lifting restrictions too early can increase the risk of resurgence" of the virus.