New coronavirus measures in Germany will last until at least January, Angela Merkel has told lawmakers in the German Parliament. A Christmas amnesty cannot be guaranteed. 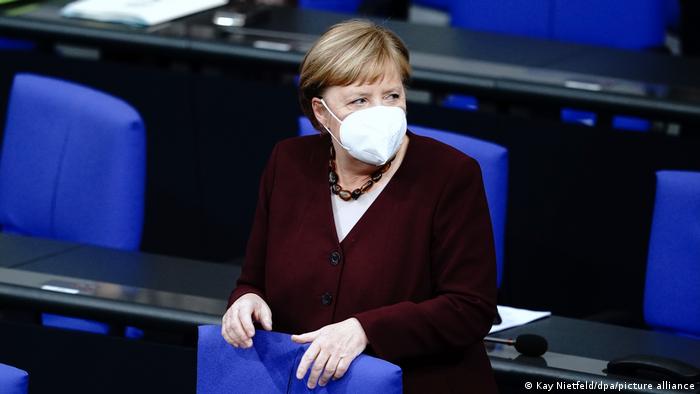 She said current lockdown measures had enjoyed some success, but more was needed to avoid the health system being overwhelmed.

"Our goal is and remains to reduce the number of infections to such an extent that the health authorities are once again able to recognise and interrupt infection chains," Merkel stressed.

She said this would be achieved if the number of new infections per 100,000 inhabitants fell below 50 within seven days. In most regions of Germany, the figure is currently significantly higher.

Merkel said Germany is hoping to have ski resorts closed down across the European Union this year, but were being thwarted by Austria.

The speech in Parliament came after new restrictions were agreed during a seven-hour meeting with Germany's 16 state premiers.

The chancellor noted that since November restrictions, people have reduced their contacts by 40%. Underscoring the need for further restrictions, she said that "if we were to wait until intensive care units are fully occupied, it would be too late."

The current lockdown has stopped the exponential growth of cases, Merkel said, but they still remain "far too high." She added that:

Merkel stressed that masks plus social distancing are the most effective way to combat the spread of the virus. However, she noted, non-medical masks are not "100% effective."

She recognized the federal government needed to spend billions of euros to mitigate the economic consequences and help affected businesses and people.

What are the coronavirus measures?

The current partial lockdown will be extended until at least December 20, and will probably be extended into January. Details include:

What is the Christmas amnesty?

If things go well, the rules will relaxed slightly between December 23 to January 1 for the celebration of Christmas. Up to 10 people are to be allowed to meet, with children aged 14 and under exempt from the limit.

Restaurants and bars will still be required to stay closed over the holiday period. People are urged to voluntarily self-isolate before and after holiday gatherings.

Employers should show flexibility and allow people to stay at home to work over this period. Public firework displays will be banned in busy squares and streets.

The amnesty is not guaranteed.

How was the response in parliament?

Epidemiologist Karl Lauterbach, member of Parliament for Merkel's coalition partners, the center-left Social Democrats, told DW that "I hope the measures will be enough. We developed them in a way that they should meet the challenge — but we will see them in a few weeks."

German MP Karl Lauterbach: 'You must compare the damage which would have occurred to what we prevented'

Merkel's speech was often accompanied by heckling from the parliament. Although the new measures were passed with a clear majority in parliament, they face stern opposition from parties such as the far-right AfD.

After the speech, Beatrix von Storch, deputy leader of the AfD's parliamentary party, told DW that the new laws were too onerous, and claimed that they were in breach of the constitution.

"If she would only stick to the personal responsibility, everything would be fine, but this is not all the measures they are taking," she said.

She said the new rules were inconsistent, and had many workarounds.

"We can sit in the parliament, 1.5 meters apart from one-and-other, without a mask. And at the same time we ask people to wear a mask when they go shopping. We tell the people they can't meet at home with more than 10 people, ... but if you want to meet all your friends then go to a public bus. ... There you can meet your friends."

The leader of the Left party in Parliament, Dietmar Bartsch, claimed the Chancellor and State Premiers were "not legitimized" to intervene in basic rights.

The head of the Green's parliamentary group, Anton Hofreiter, agreed in principle to the new measures, but was concerned they did not go far enough.

How bad is the pandemic in Germany?

Germany on Wednesday recorded its highest 24-hour death rate, with 410 people succumbing to the coronavirus.

Roughly 20,000 new infections are being recorded each day in Germany, with 22,000 recorded on Thursday.

The infection rate had been accelerating before the November lockdown, and total cases are approaching one million.

The EU has an agreement in place with US firm Moderna for 160 million doses of its experimental vaccine. Meanwhile, Russia's Sputnik V vaccine producers have said their jab is 95% effective. DW rounds up the latest.