The United States has set a daily record for new COVID-19 infections, recording over 99,000 cases in 24 hours. Germany also hit another record with over 19,000 daily infections. Follow DW for the latest. 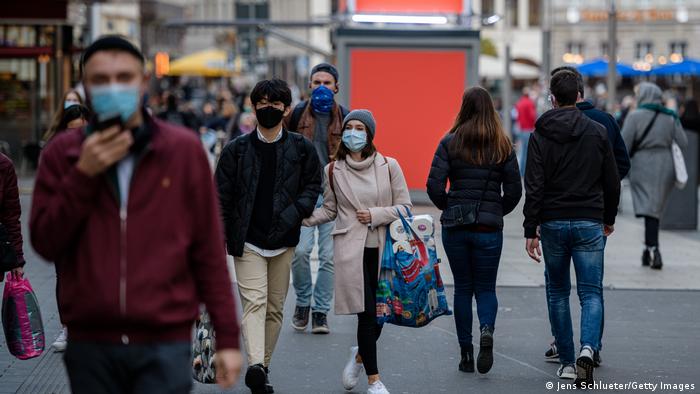 The coronavirus caseload in Europe and the United States continues to record an exponential rise, with the total number of reported infections in the US crossing the 9 million mark, while Europe topped 10 million.

The record number of cases in the US comes days before the country chooses its next president. On the campaign trail, President Donald Trump remained defiant, saying the virus will "disappear."

The United States broke its own record for daily new infections for the second day in a row, registering 99,321 cases in the past 24 hours, according to a tally from Johns Hopkins University. It broke the record of 91,000 it had set just one day earlier.

European countries are calling for the World Health Organization to be given greater powers to independently investigate outbreaks and compel countries to provide more data after the pandemic highlighted the agency's numerous shortcomings.

Germany: The number of confirmed coronavirus cases increased by 19,059 to 518,753, data from the Robert Koch Institute (RKI), the national disease prevention and monitoring health agency, showed on Saturday. The reported death toll rose by 103 to 10,452, the tally showed. A study conducted by the Max Planck Institute has concluded that deaths from COVID-19 will rise rapidly in the coming weeks, as infections spread among the number of people who are over 60.

Meanwhile, coastal German states Schleswig-Holstein and Mecklenburg-Western Pomerania  — popular tourist destinations — ordered all holidaymakers to leave by next week as part of their moves to stem the spread of the virus.

Belgium and Poland have both reported record caseloads as the crisis in Europe shows no signs of abating.

Both countries have seen more than 21,000 infections in their latest updates with Belgian health authorities on high alert as the medical system buckles under the pressure.

Poland, meanwhile, has decided to keep cemeteries closed during Sunday's All Saints
holiday.

In Slovakia a government program to screen the nation's entire population of 5.4 million people for coronavirus with antigen tests, in what would be a global first, was due to begin on Saturday.

The prime minister of Greece, Kyriakos Mitsotakis, has declared a one-month partial coronavirus lockdown, shutting down restaurants and other leisure activities in Athens and other major cities from Tuesday.

Greece has registered over 37,000 coronavirus cases since February, including over 1,600 on Friday. Accelerating from August onwards, the virus has caused 620 deaths to date.

The PM said the lockdown would shut down eateries, cafes, clubs, cinemas, museums and gyms in worst-hit areas, but would not affect retail businesses and schools, to soften the blow to the economy. In addition to the capital, the latest restrictions apply to most major cities in northern Greece including Thessaloniki, Larissa and Ioannina.

In a news conference with top government scientific advisers, he admitted that the current system of local lockdowns was no longer enough to stop the soaring coronavirus infection rate.

India: The caseload stood at 8.1 million on Saturday, with 48,268 new cases being recorded in the last 24 hours, data from the Health Ministry showed.

India has the world's second-highest caseload, behind only the United States, but new infections have seen a dip since September. Deaths rose by 551, taking total mortalities to 121,641, the ministry said.

In neighboring Sri Lanka, for the first time, police have arrested dozens of people for not wearing masks and failing to maintain social distancing, under the new laws imposed to contain the spread of the coronavirus.

Since Thursday, the government has imposed the curfew in the whole of Western province where new outbreaks at a garment factory and the main fish market were discovered early this month. It includes the capital, Colombo, where nearly 30% of the 22 million population live.

Infections from the two clusters have grown to 6,945 by Saturday, including 633 in the last 24 hours, bringing to over 10,000 the number of confirmed cases in the island nation, including 19 deaths.

Australia: The Australian government has announced that it will spend AU$500 million Australian dollars ($351 million, €300.5 million) to secure COVID-19 vaccines for the Pacific and Southeast Asia "as part of a shared recovery for our region from the pandemic."

"A fast, safe vaccine rollout ... will mean we are able to return to more normal travel, tourism and trade with our key partners in the region," Canberra said.

Meanwhile, officials in Victoria state reported just one new case of COVID-19 on Saturday as Melbourne residents head into a weekend of greater social freedom.

US President Donald Trump is the latest leader to have contracted COVID-19. The virus has seemingly swept through the global political elite.