Demand for the antiviral drug has spiked as cases in India continue to rise. Follow DW for the latest. 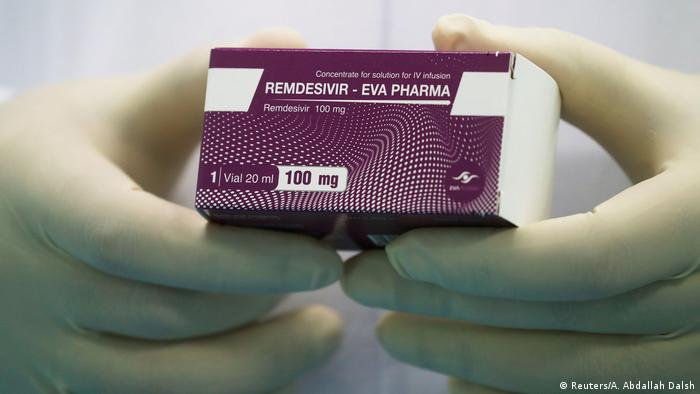 The WHO has rejected remdesivir as an effective treatment against coronavirus

Indian authorities temporarily halted exports of the antiviral drug remdesivir on Sunday, as a surge in coronavirus infections has put a strain on supply.

India reported its biggest-ever daily spike of 152,879 cases on Sunday, even as authorities launched a four-day "vaccine festival" to intensify the campaign in the country.

Health authorities said the surge in cases had led to a "sudden spike in demand" for remdesivir and that there was a "potential of further increase in this demand in the coming days."

Seven firms in India produce the drug owned by US pharma giant Gilead. It showed early promise as a treatment for COVID-19, but the World Health Organization said the drug had "little or no effect" on mortality.

The country's mass vaccination program will be conducted until April 14, following an appeal by Prime Minister Narendra Modi to chief state ministers.

Though more than 100 million doses have been administered so far, several states have reported vaccine shortages despite assurances from the government.

Here's a look at some of the other most notable pandemic-related stories around the world at present.

Germany's public institute for disease control and prevention, the Robert Koch Institute (RKI), announced that 15.2% of the German population, or 12.7 million people, have received at least one dose of COVID-19 vaccines as of Saturday morning.

The RKI repored on Sunday that the situation remains "very, very serious," after it reported 17,855 new infections and 104 deaths, compared with 12,196 cases and 68 deaths a week ago.

According to data from 70 hospitals around the country, increasing numbers of young people are being hospitalized with respiratory infections and intensive care units (ICUs) are rapidly filling up.

Germany's Chancellor Angela Merkel has once again said that she is in favor of a short, nationwide "bridge lockdown" until more people have been vaccinated.

Meanwhile, the German travel sector has reported a 76% drop in bookings for this summer in comparison with the same period last year, and the industry has blamed lawmakers for talking down the prospects of foreign holidays.

French Health Minister Oliver Veran said Sunday that France will extend the waiting time from four to six weeks between the first and second doses of the BioNTech-Pfizer and Moderna vaccines. Veran said the strategy will help France ramp up its vaccine rollout.

France is currently under a nationwide lockdown with schools and nonessential shops closed through the end of the month.

Both Slovenia and Serbia are preparing to ease some restrictions as of Monday.

In Slovenia, citizens will be able to move freely around the country, and a nightly curfew between 10 p.m. and 5 a.m. will be lifted. Kindergartens and primary schools are reopening, as well as hair salons, galleries and museums.

While in Serbia, shopping centers will open on Monday, though restaurants will continue to only serve customers outdoors.

The pope shook and kissed people's hands after a mass on Sunday despite high infection rates in Italy.

The 84-year-old pontiff has already been vaccinated against COVID-19.

A young man in Belgium died on Sunday morning after police raided an illegal lockdown party he had attended. The 21-year-old man tried to evade the police by climbing out the window, but fell to his death.

Belgium is under tight restrictions currently. Households may have a maximum of one other person over. People caught at illegal parties may be fined €750 ($890) while organizers can be told to pay up to €4,000.

About 1,000 demonstrators in Romania took to the streets of Bucharest on Saturday to demand an end to restrictive measures intended to curb the spread of the virus. Protesters yelled slogans such as "Freedom!" and "Down with the government!" while speaking out against health practices such as mask-wearing.

Romania's health system is struggling to deal with a rise in hospitalizations from the virus. Romania on Saturday passed 1 million total coronavirus cases.

The US administered a record-breaking 4.6 million coronavirus vaccine shots in one day, authorities announced on Sunday.

The US Centers for Disease Control said that a total of 183 million doses have been administered so far throughout the country, with an average of 3 million shots being given every day. Some 45% of adults in the country have received at least one shot, while 27% have been fully vaccinated against the virus.

Peru registered 384 new coronavirus deaths in a 24-hour period Saturday, the country's third-highest daily death toll of the past week. Peruvians will go to the polls on Sunday to elect a new president, with multiple presidential candidates having previously tested positive for the virus.

Mexico on Saturday recorded 2,192 new fatalities from the virus, one of the country's largest single-day death tolls.

His spokesman said Metro Manila and the provinces of Bulacan, Rizal, Laguna and Cavite, which have been in a strict lockdown due to COVID-19 infections, will operate under looser cubs until the end of the month.

There is no official data yet regarding the effectiveness of mixing vaccines.

Researchers in Israel found that the BioNTech-Pfizer vaccine may be less effective against the South African variant in a real-world data study. The research has not yet been peer-reviewed.

Paris and other northern regions of France had already seen restrictions on movement and non-esssential shops closed. But now President Macron says they should apply to the whole country as he shutters school as well.