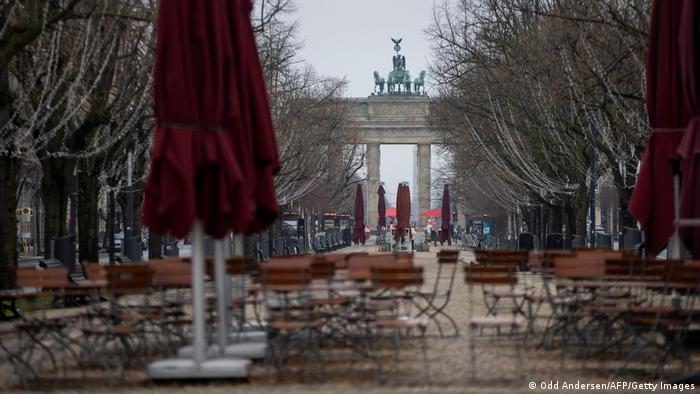 On Wednesday, a German government spokeswoman said the chancellor was in favor of a short nationwide lockdown to help stem rising coronavirus figures.

As Germany struggles to tackle a third wave of COVID-19 cases during a sluggish vaccination campaign, several state leaders have backed calls for a period of strict restrictions.

"Every call for a short, uniform lockdown is right," said spokeswoman Ulrike Demmer. "Also, a common nationwide approach would be important here."

The differing rules across the country's 16 states "is not contributing to security and acceptance at the moment," she added.

"At the moment, we don't have a particularly good data basis as far as the numbers of new infections are concerned. But the number of occupied intensive care beds speaks a very clear language. It is increasing very much, very strongly and very much too fast. Intensive care physicians are worried."

"The health system is under intense pressure," she said, underlining a 5% increase in intensive care bed occupancy in just 24 hours.

"We need a stable incidence below 100," she said, referring to Germany's number of new COVID-19 cases over seven days per 100,000 inhabitants.

The national figure currently lies at 110.1, according to the country's Robert Koch Institute for infectious diseases.

Demmer told the reporters that the regional patchwork of rules was "not contributing to security and acceptance at the moment."

Under Germany's federal system, each state ultimately has the power to decide its own coronavirus rules. Some have failed to impose tougher restrictions despite case numbers that exceed a nationally-agreed "emergency brake," and even gone ahead with a relaxation of the rules.

Among those calling for a short and tougher lockdown is Armin Laschet​, the leader of Merkel's Christian Democrat party, who said a "bridge lockdown" could be needed to keep cases down until more people have been vaccinated. He has also called for talks between the chancellor and other state premiers, scheduled for next Monday, to be brought forward.

Merkel has previously criticized Laschet — a potential candidate to replace her as chancellor — for resisting tougher measures in the past.