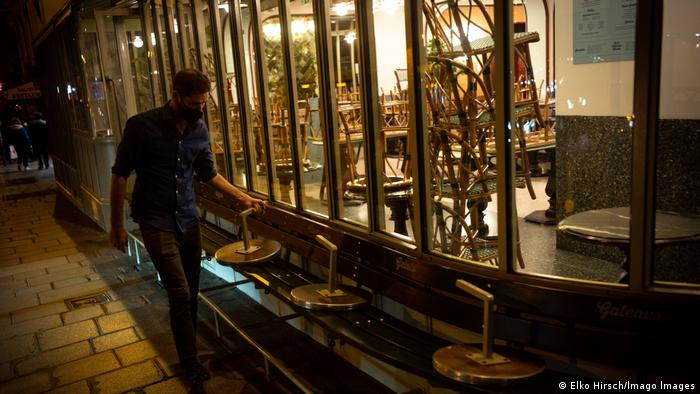 Authorities in Paris put an end to a gathering of more than 110 diners at an underground restaurant in defiance of coronavirus restrictions, authorities said on Saturday.

The incident came as investigators are probing underground dining soirees amid rumors that French ministers were also among the guests.

French police said on Twitter they were responding to "an excessive noise complaint about a restaurant" late Friday.

"Guests fined for failing to respect applicable health measures," police said, adding that they arrested the event organizer and the restaurant manager.

In recent weeks, local media have reported that several underground restaurants were hosting wealthy people for a pre-pandemic dining experience as France battles a rise of coronavirus infections.

In a separate incident, police handed another 62 people a €135 fine each ($160) for a lunch gathering in Saint-Ouen, just outside Paris, the broadcaster BFMTV reported.

Police said they also arrested the manager of that restaurant.

Ordering your own lockdown French chef

Ordering your own lockdown French chef

Businessmen and lawyers were among dozens who went to the underground restaurant via an entrance of a residence protected by a code, according to BFMTV.

Police had been investigating that restaurant for three weeks, BFMTV reported.

No 'evidence' of ministers attending parties

TV channel M6 had aired footage showing a party at a high-end venue with attendees not following social distancing rules or wearing masks.

Prosecutors said they aimed to identify the organizers and participants and determine whether the party was indeed held during lockdown.

Pierre-Jean Chalencon, a French businessman, collector and expert of the Napoleonic period, was implicated in the M6 report and briefly detained for questioning.

Chalencon claimed that his luxury Palais Vivienne venue in central Paris had organized several dinners that some ministers attended. His lawyers later told AFP news agency that he was "joking."

"At this stage of the investigation, there is no evidence that indicates any members of the government took part in the dinners being investigated," prosecutors were quoted as saying by AFP.