Pharma companies BioNTech and Pfizer have sought approval for the emergency use of their COVID-19 vaccine in adolescents aged 12 to 15 in the United States. All the latest COVID-19 news from DW. 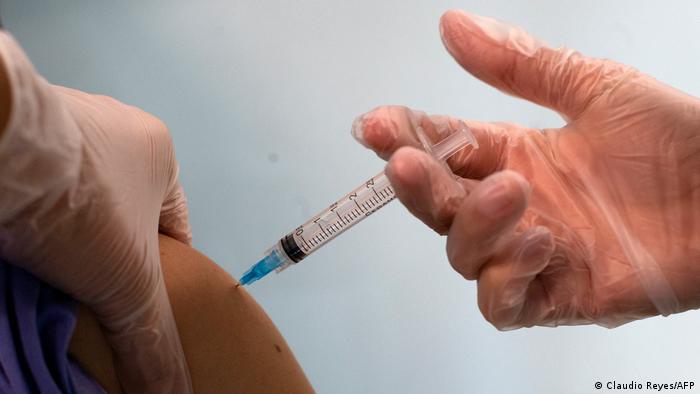 BioNTech and Pfizer have sought approval from US regulators for the emergency use of their COVID-19 vaccine in adolescents aged 12 to 15. The vaccine is currently authorized for emergency use in the US for people aged 16 and above.

The drugmakers said they have reached out to the US Food and Drug Administration (FDA) for an expansion of the authorization after the shot was found to be safe and effective in 12- to 15-year olds in a clinical trial.

Dr. Janet Woodcock, acting commissioner of the FDA, said regulators had received the companies' request and added: "While the FDA cannot predict how long our evaluation of the data and information will take, we will review the request as expeditiously as possible using our thorough and science-based approach."

Inoculating young people has been deemed critical in reaching herd immunity and containing the coronavirus pandemic.

Moderna Inc and Johnson & Johnson are also testing their shots in people between the ages of 12 and 18. Pfizer and Moderna have expanded trials to even younger children — aged six months to 11 years.

The World Bank would have committed $2 billion in financing for coronavirus vaccines by the end of April, according to the organization’s Managing Director of Operations Axel van Trotsenburg. The funds will help get the shots to about 40 developing countries across the globe.

This is a part of nearly $12 billion that the World Bank has put into vaccine development, distribution and production in low-and middle-income countries.

Europe’s sluggish vaccine rollout has taken another hit as EU regulators announced that they were reviewing the side effects of the Johnson & Johnson coronavirus shot.

This comes as US regulators said they had not found a "causal" link between the J&J vaccine and blood clots, but would continue their probe after some individuals suffered complications.

In Germany, over 40 suspected cases of rare blood clots have been reported after vaccination with the AstraZeneca shot, the Paul Ehrlich Institute said late Friday.

Germany has recorded 24,097 new cases of the virus, taking the country’s total to 2,980,413, according to data from the Robert Koch Institute (RKI) for infectious diseases. The country's death toll from the coronavirus pandemic rose by 246 to 78,249.

Berlin's Charite Hospital is very concerned about the third wave of the pandemic. "If the number of seriously ill COVID patients exceeds the second wave, we will enter a critical situation," said Martin Kreis, board member in charge of Germany's largest university hospital.

"We will continue to do everything we can for patients from the region in Berlin," said Kreis, as he expressed fears over shortages of intensive care units.

Travelers from the US, Canada, Belgium, France and Italy will be required to quarantine at a hotel upon entering Ireland, a country with one of the strictest travel restrictions in Europe.

These countries join an expansive list of nations, including Armenia, Bangladesh, Bermuda, Bosnia and Herzegovina, Maldives, Pakistan, Turkey and Ukraine, in the mandatory hotel quarantine requirements.

India registered a record 145,384 new COVID-19 cases on Saturday and the highest number of deaths in more than five months. The surge has forced the state of Maharashtra, the country’s second-most populous state, to impose a weekend lockdown.

Maharashtra state, of which financial hub Mumbai is the capital, contains the most coronavirus infections in the country. It has already shut down restaurants, shopping malls and places of worship. The lockdown is set to end early Monday.

India's overall caseload has jumped to more than 13 million, the third-highest globally, behind the US and Brazil.

China's output of COVID-19 vaccines could reach more than 3 billion doses by the end of 2021, Zheng Zhongwei, a National Health Commission official, has said.

Four vaccines, two from Sinopharm CNBG, one from Sinovac Biotech and one from CanSino Biologics, have been approved for use among the general public. A fifth vaccine from the Institute of Microbiology of the Chinese Academy of Sciences has been cleared for limited emergency use.

"In several places in the country, stricter measures are needed to curb the spread of the virus," he told a news conference just days after Ontario implemented a stay-at-home order and Quebec introduced stricter measures.

But Alberta, which is leading the country in new cases per capita, has been more reluctant to impose measures, only now closing bars and restaurants.

"We must do everything we can to fight this third wave," said Trudeau.

The BioNTech-Pfizer coronavirus vaccine is now being tested on young children under-12, with efficacy data expected later this year. The vaccine makers hope the shot can be administered to kids by 2022.

The Supreme Court in Brazil has called upon the Senate to probe the government's handling of the pandemic. India has reported a record caseload for the third day in a row. Follow DW for the latest.

The company has said it would submit another authorization request with further information, as India said it had not seen enough evidence the shot was safe.