Beijing has decried accusations made by US Vice President Mike Pence, who claimed China is working to undermine President Donald Trump. Pence spoke of an "unprecedented effort" to influence American voters. 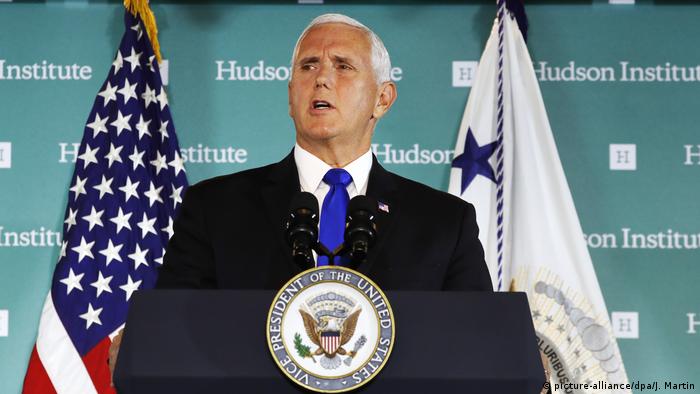 Responding to a blistering speech by US Vice President Mike Pence, Beijing has called on Washington to stop "groundlessly accusing" China of electoral meddling.

The appeal comes after Pence accused China of using "covert actors, front groups and propaganda outlets" to sway American voters ahead of the US midterm elections in November.

On Friday, China's Foreign Ministry rejected the claims as "unwarranted" and "ridiculous."

Pence "made unwarranted accusations against China's domestic and foreign policies and slandered China by claiming that China meddles in US internal affairs and election," Foreign Ministry spokeswoman Hua Chunying said in a statement.

"This is nothing but speaking on hearsay evidence, confusing right and wrong and creating something out of thin air," she said. "We have no interest in meddling in US internal affairs and elections."

Speaking at a Washington think tank on Thursday, Pence said Beijing was engaged in an "unprecedented effort" to influence American voters. The escalation comes as the US and China face off on tariffs and China's naval claims.

"China wants a different American president," Pence said in his address at the Hudson Institute.

The targeted efforts allegedly focus on "industries and states that would play an important role" come November.

"By one estimate, more than 80 percent of US counties targeted by China voted for President Trump and I [sic] in 2016," Pence said. "Now, China wants to turn these voters against our administration."

Since wining the 2016 vote, Trump has been hounded by claims that Russia meddled in the election, working in his favor. Several law enforcement agencies have confirmed the claims, despite Russia's denial.

On Thursday, however, Pence indicated that China's alleged effort was on a much bigger scale.

"As a senior career member of our intelligence community recently told me just this week, what the Russians are doing pales in comparison to what China is doing across this country and the American people deserve to know," he said.

Pence also urged Google to immediately end development of its Dragonfly app for China that would make it easier to track someone's internet searches.

The app "will strengthen Communist Party censorship and compromise the privacy of Chinese customers."

Last week, Trump accused China of electoral interference at the UN and cited a paid advertising insert by China Daily, an entity linked with the Chinese government, republished in The Des Moines Register in Iowa. The four-page insert deals with the effects of Trump's trade policies.

dj/cmk (AP, Reuters)
Each evening at 1830 UTC, DW's editors send out a selection of the day's hard news and quality feature journalism. You can sign up to receive it directly here.

Pentagon chief Jim Mattis has issued a sharp criticism of Beijing's actions in the South China Sea. He accused China of "intimidation and coercion" by placing weapons on manmade islands in the disputed waterway. (02.06.2018)