Trump accuses China of meddling in US midterms

Donald Trump says China is seeking to influence the upcoming midterm elections. In a speech at the UN Security Council, the American president also took aim at Iran, vowing to pursue tougher sanctions "than ever before." 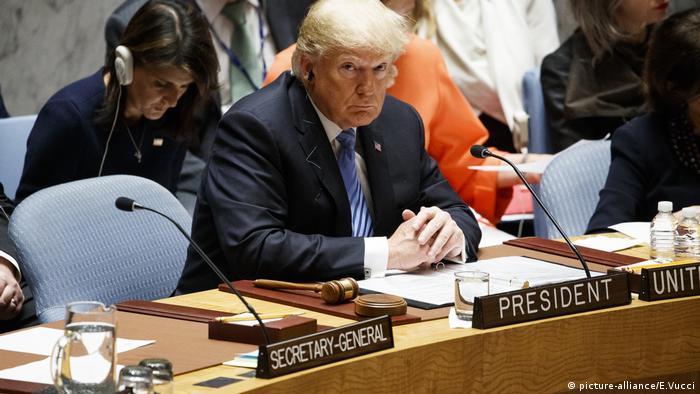 US President Donald Trump opened a meeting of the UN Security Council on Wednesday with an attack on Iran and a pledge to ensure Tehran never obtains a nuclear bomb.

It was the first time Trump had chaired a session of the Council on countering nuclear, chemical and biological weapons. He used the occasion to accuse Iran of sponsoring terrorism and fueling "conflict around the region and far beyond."

The US backed out of a 2015 nuclear accord with Iran in May and has since been steadily reimposing sanctions on the Islamic Republic. The American president warned world leaders at the UN that "all US nuclear-related sanctions will be in full force by early November," adding that countries who didn't comply would face "severe consequences."

French President Emmanuel Macron, who spoke directly after Trump, called for "a long-term strategy to manage the crisis that cannot be reduced to a policy of sanctions and containment of Iran."

Trump accused China of attempting to interfere in the upcoming midterm elections in the US but did not present evidence for his claim.

"They do not want me or us to win because I am the first president ever to challenge China on trade and we are winning on trade, we are winning at every level," he said.

US intelligence officials have previously blamed Russia for meddling in the 2016 US presidential election.

Trump condemned the ongoing Syria conflict, saying that the "Syrian regime's butchery" had been "enabled by Russia and Iran."

At the same time, he thanked Iranian, Russian and Syrian governments for "substantially slowing down" a military offensive on the last Syrian rebel stronghold, Idlib. He also praised Britain and France for supporting US strikes in response to the Syrian government's use of chemical weapons against civilians.

Trump said he had a "wonderful relationship" with Kim Jong Un after his landmark summit with the North Korean leader in June, but stressed that sanctions had to be enforced until denuclearization occurs.

"Kim Jong Un, a man I have gotten to know and like, wants peace and prosperity for North Korea," Trump said, adding that he could imagine relations with Iran eventually progressing along a similar "trajectory."

Trump is one of around 130 world leaders attending the General Assembly this week in New York. During his speech before the chamber on Tuesday, Trump's praise of his own administration's achievements drew derisive laughter from world leaders.

International expectations are high after Germany's bid for a nonpermanent seat on the UN Security Council won overwhelming support earlier this year. But fulfilling them all could prove tricky. (25.09.2018)

President Macron urged leaders to reject "the law of the most powerful," in what was seen as a veiled rebuke of the US. He also stressed the need for dialogue with Iran, which Trump accused of having a "blood agenda." (26.09.2018)