President Macron urged leaders to reject "the law of the most powerful," in what was seen as a veiled rebuke of the US. He also stressed the need for dialogue with Iran, which Trump accused of having a "blood agenda." 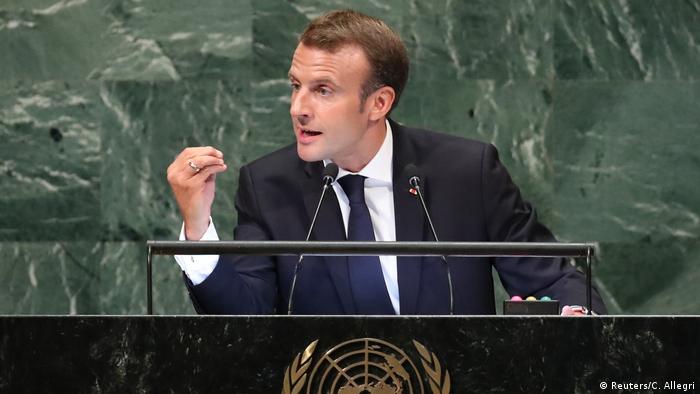 French President Emmanuel Macron drew loud applause from the UN General Assembly chamber on Tuesday, after he gave an impassioned plea for continued multilateralism and blasted the isolationist politics of the US.

While he admitted that there was growing skepticism towards international bodies such as the European Union and UN, Macron warned that "Nationalism always leads to defeat."

Macron took to the podium after US President Donald Trump had earlier vowed to never surrender American sovereignty from "unelected, unaccountable global bureaucracy" and condemned the Iranian regime for having a "blood agenda" in Yemen and Syria.

Macron: 'We are being pushed around by the unilateral decisions of our US allies'

The French President's speech, however, often read like a point-by-point counterattack on Trump's keynote policies agenda.

Trump's law of the jungle

Macron warned that Trump's isolationist policies, particularly towards Iran, only raised the potential threat of conflict.

Unilateralism leads "directly to isolation and conflict ... to the detriment of everyone, even in the end those who thought they were strongest," he declared. "The law of the jungle does not protect any people against any threat whatsoever, whether chemical or nuclear."

Macron also called for "dialogue and multilateralism" in dealing with issues concerning Iran, saying that the Iran nuclear accord had helped to curb Tehran's nuclear program.

"What will bring a real solution to the situation in Iran and what has already stabilized it? The law of the strongest? Pressure from only one side? No!" he said. "We know that Iran was on a nuclear military path but what stopped it? The 2015 Vienna accord."

Trump withdrew the US from the seven-nation agreement to curb Tehran's nuclear program in May. The US followed this up by reimposing sanctions on the Islamic Republic.

The French president also suggested that Iran should be allowed to sell its oil on global markets. This, he pointed out, would go some way in solving Trump's irritations over the rising oil price.

No trade deals for those outside the Paris climate agreement

Macron also touched on climate change and launched a veiled attack on the US' decision last year to withdraw from the Paris climate pact.

The French president warned that future trade deals could be contingent on membership in the climate agreement — a move clearly designed to put pressure on the US to reconsider its decision to quit the accord.

"Even those who contest the reality" of climate change "are suffering its consequences like everyone else," he told the assembly.