Donald Trump hit out at the global community in his speech at the UN General Assembly. The address featured an authoritarian tone unbecoming of a US president and illustrated Washington's isolation, says Michael Knigge. 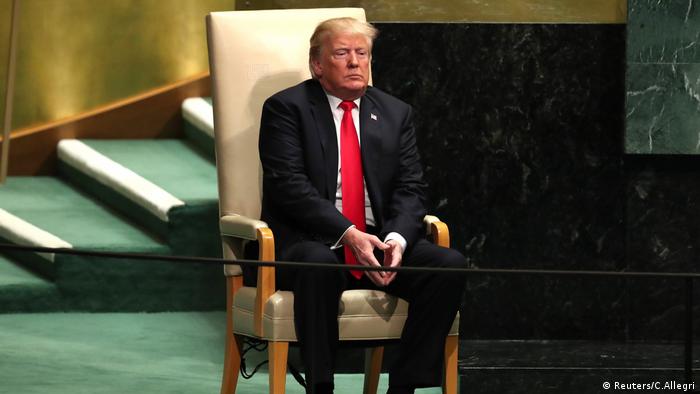 In his first address at the General Assembly last year, a newly elected President Donald Trump threatened to annihilate another United Nations member state, North Korea. In his second appearance at the world body on Tuesday, Trump did not threaten to attack another UN member state. Instead, in a hard-edged speech that was reminiscent of his historically dark inauguration address, he took on the entire international community and its underlying principles of multilateralism and cooperation.

As in his inauguration remarks, Trump at the UN portrayed the US, the world's most powerful country, as a victim that has been exploited by nefarious external forces and himself as the savior. One of these pernicious forces threatening the well-being and the sovereignty of the US, according to Trump, is global governance.

Nationalism instead of globalism

Trump's answer to the false choice between multilateralism and sovereignty, and the imagined impending takeover of the US by UN types, is simple — and nothing new: The crude nationalism espoused in his campaign slogans "Make America Great Again" and "America First" that helped him win the presidential election will beat back the alleged creeping advances of globalists. In Trump's words: "America is governed by Americans. We reject the ideology of globalism."

But while the truism that America is governed by Americans and the rejection of what he called globalism may win him points at a campaign rally in Kansas, it doesn't with the global leaders gathered in Manhattan. The same goes for his bragging, and factually inaccurate opening line that his administration had accomplished more than any other in US history. At the UN General Assembly it was rightfully met with a mixture of incredulous and embarrassed laughter. That was also the reaction of the German delegation after Trump called out Berlin by claiming that Germany would become completely dependent on Russian energy if it did not reverse course on a controversial gas pipeline.

This was remarkably the only instance in which Trump — albeit indirectly — criticized Russia. The country's actions in Syria? The interference in the US electoral process? The poisoning of a former Russian spy in Britain? The attacks on human rights activists and journalists?

None of it was mentioned in a speech in which Trump otherwise hammered not only the entire international community, but also Washington's traditional trading partners and the OPEC group of countries. He even singled out China and Iran for sharp criticism, but Russia was curiously spared.

Russia can therefore clearly be considered a winner after Trump's speech, as can authoritarian leaders generally. Because with his remarks at the UN, the president of the world's most powerful country gave the green light for authoritarian-minded leaders and strongmen to pursue whatever they deemed to be in their national interests, and not worry about petty interferences from the UN or other reviled agents of globalism.

After a year in which the US has exited key international treaties such as the Iran nuclear deal and the Paris climate accords, and left UN bodies including UNESCO and the UN Human Rights Council, Trump presented himself, under the guise of reclaiming sovereignty, as a quasi role model for other leaders to follow.

Trump's speech also underscored that his administration is serious about Washington's retreat as the leading multilateral actor, instead charting a course driven by purely nationalist sentiments. Nothing highlights the zero-sum-mentality that is the core of everything this president says or does better than Trump's declaration that in the future US foreign aid dollars will only flow to friendly countries. This is not just a politically short-sighted move which will undermine Washington's global standing and its leadership role, it is also an abdication of human decency.

If there is anything positive to come from Trump's speech, and that is a big if, then it may be that other democratic members of the international community should now have realized that, until this president leaves the White House, they need to try to fill the vacuum left by a retreating US.

This is a tall order, but it may be possible, because Trump has isolated his country internationally. The president and his policies are deeply unpopular in large parts of the world. That was again on display Tuesday in the way the audience reacted during his speech. But not liking Trump is not enough. If the collective international community does not want a global order in which only the most powerful countries call the shots, it needs to protect international bodies like the UN.

Opinion: Boycotting Black Friday is a waste of time 20h ago