Rod Rosenstein, who oversees the Mueller investigation, recently came under scrutiny for critical comments about Trump. His departure could negatively impact the federal investigation into Russian election activities. 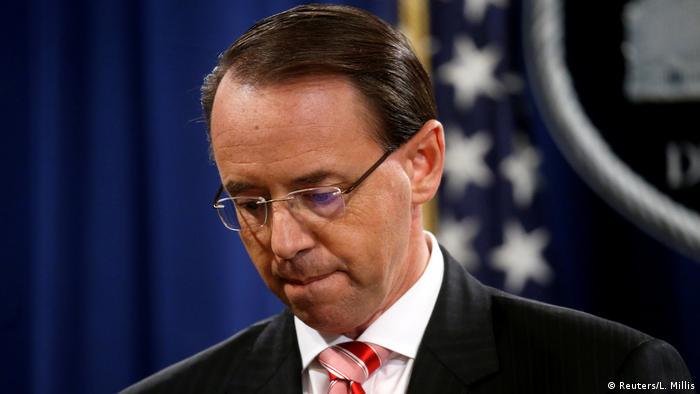 US media reported the imminent departure of US Deputy Attorney General Rod Rosenstein on Monday. It was unclear, however, whether he would resign or be fired.

The New York Times and The Washington Post said that Rosenstein was preparing to be dismissed, following the publication of earlier reports that he had discussed ways to remove Trump over incompetence.

Rosenstein "verbally resigned to Chief of Staff John Kelly in anticipation of being fired by President Trump," reported Axios, citing a source "with direct knowledge."

Last year, Rosenstein had suggested wearing a wire during meetings with Trump to secretly record him, then use the recordings to start a process to remove the president from office, according to the report in The New York Times last week. Rosenstein has denied the report.

Rosenstein and US President Donald Trump "had an extended conversation to discuss the recent news stories," White House Press Secretary Sarah Sanders said in a statement posted on Twitter following the reports. "They will meet on Thursday when the president returns to Washington."

"There is nothing more important to the integrity of law enforcement and the rule of law than protecting the investigation of Special Counsel (Robert) Mueller," McCabe said in a statement. "If the rumors of Deputy AG's Rosenstein's departure are true, I am deeply concerned that it puts that investigation at risk."

Read more: What you need to know the Mueller investigation