After cutting $200 million in Palestinian aid in August, US President Donald Trump is making further cuts. It comes as the US is preparing to unveil its peace plan for Israel and the Palestinians. 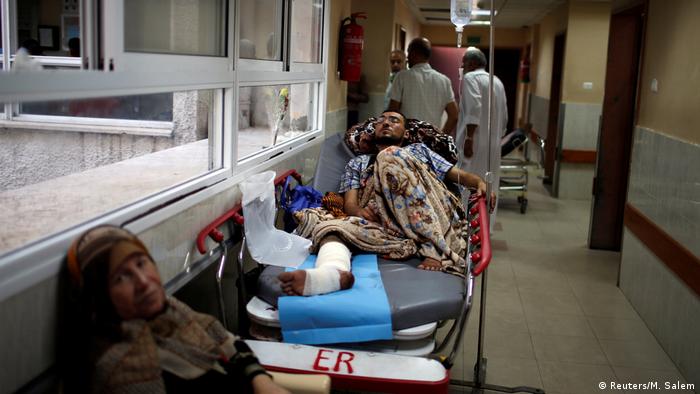 The US government has said it will redirect $25 million (€21.6 million) in aid for hospitals that mainly care for Palestinian patients.

The decision came after a review of assistance to the Palestinian Authority in the West Bank and Gaza "to ensure these funds were being spent in accordance with US national interests and were providing value to the US taxpayer," according to the US State Department.

"As a result of that review, at the direction of the president, we will be redirecting approximately $25 million originally planned for the East Jerusalem Hospital Network," a State Department official said Saturday, adding that "those funds will go to high-priority projects elsewhere."

According to the World Health Organization, the US funds have previously made it possible for many Palestinians to seek specialized treatment, such as cardiac surgery, neonatal intensive care or children's dialysis, which are unavailable in the West Bank and Gaza.

The US State Department already announced a cut of more than $200 million in bilateral aid to the Palestinians in August following a funding review.

US hostility toward Palestinians has increased since Trump's controversial decision to recognize Jerusalem as Israel's capital in December — a move that caused outrage among Palestinians and Muslims worldwide.

"This is not a formula of peacebuilding, this is a complete inhuman and immoral action that adopts the Israeli right-wing narrative to target and punish Palestinian citizens to compromise their rights to independence," said Ahmad Shami, a spokesman for Palestinian leader Mahmoud Abbas.

"This dangerous and unjustified American escalation has crossed all red lines and is considered a direct aggression against the Palestinian people," it said.

"Such an act of political blackmail goes against the norms of human decency and morality," said Hanan Ashrawi, a member of the Palestine Liberation Organization executive committee.

Trump and his Middle East advisers are due to release the administration's peace plan for Israel and the Palestinians.

Israel prepares for 'Day of Rage' over Trump's Jerusalem decision

Israel is preparing for further unrest after Palestinian factions called for a "Day of Rage." A wave of protest followed US President Donald Trump's decision to recognize Jerusalem as Israel's capital. (08.12.2017)