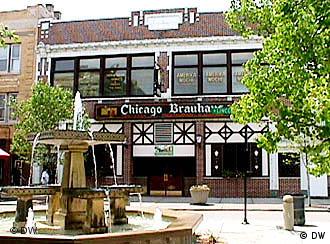 The Chicago Brauhaus on Lincoln Square

Greater Chicago with its eight million inhabitants is home to one of the largest German communities in the United States: Some 10.000 German-Americans are active members of German heritage clubs here: carnival societies, German choirs, or clubs dedicated to the traditions of specific German regions.

The heart of Chicago's German community is Lincoln Square. Here you'll feel almost like on a "Marktplatz" in Germany: there's a German pharmacy, a German optician, a German Travel Agency and a shoe store selling shoes "made in Germany". And if you're tired and thirsty after all that shopping, you can always grab some refreshments at the "Chicago Brauhaus".

A Brauhaus is a traditional German brewery with its own pub attached. Two of the best-known Brauhäuser in Germany are the "Hofbräuhaus" in Munich and the "Brauhaus Früh" in Cologne.

The past twenty years have changed life in the German-American community in Chicago considerably. Most German-Americans have left the area around Lincoln Square and have moved to the suburbs. They are blending into the American mainstream. As a result, the number of members in German-American clubs is declining and in downtown Chicago many facades of what were once flourishing German businesses are crumbling.

The only thing that holds the German community together is the newspaper "Amerika-Woche" (America Week), a weekly journal that has been published in Chicago since 1972. The paper has its offices in the same building that also houses the "Chicago Brauhaus". Today, the "Amerika Woche" is the largest German-speaking journal in the US. 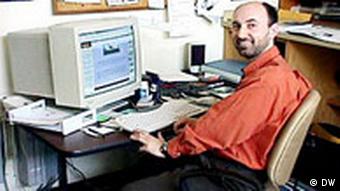 But what sounds like a successful business today has also seen its share of rough times in the past. In the mid 1990s, the publisher of "Amerika-Woche" had already made plans to close the paper down. Back then it was hardly anything more than a weekly newsletter reporting on German-American club life in Chicago.

If it hadn't been for 28-year-old Mario Schiefelbein from Cuxhaven, Germany, the paper would have disappeared. Schiefelbein came to Chicago from Northern Germany in March of 1994. "America is just around the corner" is a saying still heard today, one-hundred ten years after the "Hamburg-America-Line (HAPAG)" first started its steamship service out of Cuxhaven. When Schiefelbein arrived in the New World, he brought with him nothing but two suitcases and his girlfriend.

In Germany, Schiefelbein had worked as a journalist with a local newspaper in Cuxhaven. In Chicago, he made the step to being owner, publisher and editor-in-chief of the "Amerika-Woche" virtually overnight. Mario enjoys being his own boss. He says he hasn't regretted leaving his old job and his old life in Germany behind for a single day.

Since Mario became editor-in-chief, he has turned the newspaper into a nation-wide publication.

Today, the "Amerika Woche" covers a world of topics that are all somehow related to Germany - be it politics, business, culture or sports. One important focus for Mario Schiefelbein are bilateral issues. But he makes it clear that he's not trying to cultivate a "Lederhosen-nostalgia" in the US.

Each week, Mario Schiefelbein and his staff of five editors and two trainees produce a 30-page newspaper. Some 25.000 Americans regularly read it, says Mario. That may not sound like a lot, especially when keeping in mind that there are about two million Americans who are able to read and understand German. But it is difficult for Mario Schiefelbein to find more subscribers, since nationwide advertising campaigns are too expensive.

For him, the only way of making the "Amerika Woche" more popular among German-speaking Americans is word of mouth. Mario Schiefelbein's most important goal is to get young readers and subscribers interested in the "Amerika Woche". That's why he has put a lot of effort into an interactive web site , which goes hand-in-hand with the printed edition of the paper.

Mario Schiefelbein's big dream is to buy up the eight other German-speaking newspapers in the States. They are currently being published in different American cities across the nation - from Washington D.C. to Los Angeles. Mario would like to merge these papers with the "Amerika-Woche".

He thinks that's the only way German newspapers in the US can survive. And just in case this huge newspaper-project should not work out, Mario Schiefelbein and his wife are ready to take on a new challenge. He says they definitely do not want to retire and move to Florida: "There are plenty of challenges still waiting for us out there in the world".