Some claim that Pennsylvania is where ketchup was invented by Herr Heinz. What better condiment to eat with your bratwurst?

The city of Pittsburgh / Pennsylvania is home to the headquarters of H.J. Heinz Company, one of the world's leading makers of branded foods.

The company's most famous product is Heinz ketchup. For people all over the world, it has become an all-American icon, as a German radio-commercial suggests.

The company was founded some 125 years ago by Henry John Heinz, the son of a German immigrant. It has been selling ketchup since 1876. Legend has it that Henry John Heinz invented ketchup by adapting a Chinese recipe for so-called Cat Sup, a thick sauce made from tomatoes, special seasoning and starch.

Food engineer Werner Stoll of the Heinz company is positive: "H.J. Heinz invented ketchup. That's for sure. The concept of ketchup began here in Pittsburgh. It didn't exist before that."

The extraordinary story of Heinz ketchup began with 25-year old H.J. Heinz experimenting in the kitchen of his German mother. He decided to market his mother's grated horseradish and bottled this product in clear glass jars to show its purity. Heinz' horseradish soon became a success.

H.J. Heinz, it turned out, was a marketing genius: "Heinz recognized consumer needs that others just didn't see. Nobody had thought of these things before him," explains Andrew Masich, who put together an exhibition on Heinz for the Senator John Heinz Pittsburgh Regional History Center .

During his research, Andrew Masich became convinced that the inventor of ketchup was an absolute marketing wizard. He was the one who thought of the slogan '57 varieties', for instance, which you can still read on all Heinz products today.

Ketchup historian Andrew Masich explains: "H.J. Heinz just made it up. He said: 'I need to think of a number that will be memorable, that will be catchy'. And so he tried 53 and 59, but that didn't work, and then 57! 57 has a nice ring to it. It looks good when you write it. And so he started putting that number on everything: all of his products, he put it on giant billboards, on mountainsides and every place you can think of he put that 57."

In 1886, H.J. Heinz came back from a trip to Germany laden with ideas. He has seen that workers in Germany were often treated better and earned more than workers in Pittsburgh. So in order to motivate his workers, he introduced new social benefits and services that had a positive effect on the quality of his products and on the productivity of his workers.

Andrew Masich: "I think Heinz was aware of his German descent. His mother certainly spoke German and he spoke German as well. He sent representatives to Germany - his salesforce actually went all over the world. They went to Cairo, Egypt, and they went to China. But I don't know that Heinz had a special affinity for Germany."

Today, Heinz operates in some 200 countries worldwide and sells some 6000 products ranging from tuna fish to cat food. Annual sales of the H.J. Heinz company are over US$9 billion. Ketchup is no longer made at the Heinz factory in Pittsburgh, which has turned to manufacturing baby food and instant soups instead. Ketchup is now produced at the Heinz plants in Ohio and Iowa. 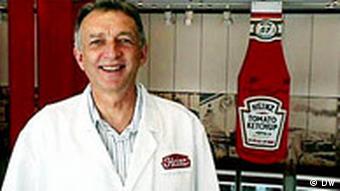 Ketchup is still the most famous Heinz product. The strictly guarded recipe has remained almost unchanged for the past 100 years. What has changed, though, is the color: consumers in America can now choose between red and green ketchup. This innovation by Heinz marketing strategists has helped the company gain more than a 70 percent slice of the ketchup market.

Werner Stoll explains how Heinz researchers came up with the idea to produce green ketchup: "They conducted surveys with children and teenagers, and the kids said:'We want a different colored ketchup.' Most of them said they wanted the color green."

By the way: the new green ketchup tastes exactly the same as red ketchup. But, as Werner Stoll explains, if the consumers one day decide they would like blue or yellow ketchup, Heinz would even produce these varrieties. And giving priority to what the customers want even in this rather innovative way would surely be in line with the ideas of company founder Henry John Heinz.

In association with the Smithsonian Institution