Western nations on the UN Security Council have said Belarus is putting people "in danger for political purposes." Russia, a regional ally of the Belarusian government, has rebuked the allegations. 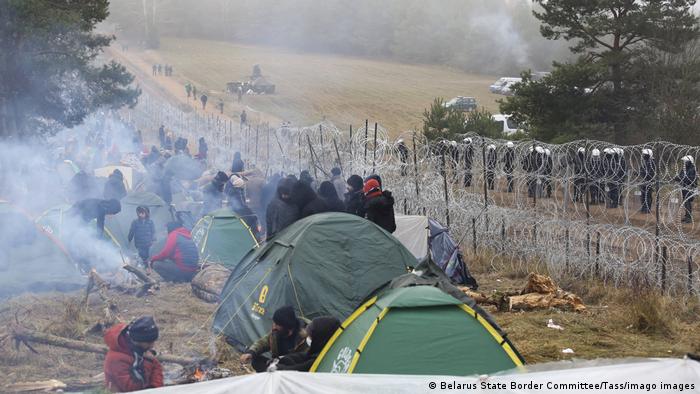 Western countries on the UN Security Council and Russia traded blows on Thursday over who is responsible for an escalating crisis at the Polish-Belarusian border.

What did the two sides say?

"We condemn the orchestrated instrumentalization of human beings whose lives and wellbeing have been put in danger for political purposes by Belarus," those countries said. They claimed Minsk aims to "destabilize neighboring countries and the EU's border" while "diverting attention away from its own increasing human rights violations."

UNHCR, IOM granted access to migrants at border between Belarus and Poland

Lukashenko has been accused of flying migrants and refugees into Europe from Middle Eastern countries such as Iraq. The Belarusian president is allegedly using this tactic to punish the EU, as Belarus has been hit with debilitating sanctions from the West.

Russia, a regional ally of Belarus, rebuked the allegations on Thursday.

Moscow's deputy UN ambassador, Dmitry Polyanskiy, told journalists ahead of the UN Security Council meeting that Western countries "have some kind of masochist inclinations because to raise this topic, which is a total shame for the EU, in front of us would be very brave."

He said Belarus and Russia are "absolutely not" helping the migrants and refugees come to Europe.

"It's not the first time that the EU is faced with such a crisis," Polyanskiy said. "One should be mindful of the reasons why these people are fleeing their home countries, who was responsible for this crisis, and what states destroyed their homelands."

He said the EU must stand together with Poland in handling the situation.

Seehofer called Lukashenko's alleged use of migrants to destabilize the EU a "quite nasty political method."

German Chancellor Angela Merkel has also called the migration tactics by Belarus "inhumane and unacceptable." She spoke with Russian President Vladimir Putin earlier this week and urged him to act.

Polish Prime Minister Mateusz Morawiecki said Thursday in a statement that his country is witnessing a "new kind of war" whose "ammunition is civilians."

When asked if she is content with how the German government and Merkel have supported her cause, Tsikhanouskaya replied she is "grateful for any support any country shows." At the same time, she added that "much more could be done."

"That's why we continue communicating with the Bundestag, with the government of Germany, with maybe the future government to put Belarus as a priority in foreign policy, to be bolder in the actions, to be braver in the resolutions," she said.

In addition to new sanctions against Lukashenko, Tsikhanouskaya said Germany and other countries could "could help civil society in this difficult moment" in Belarus. 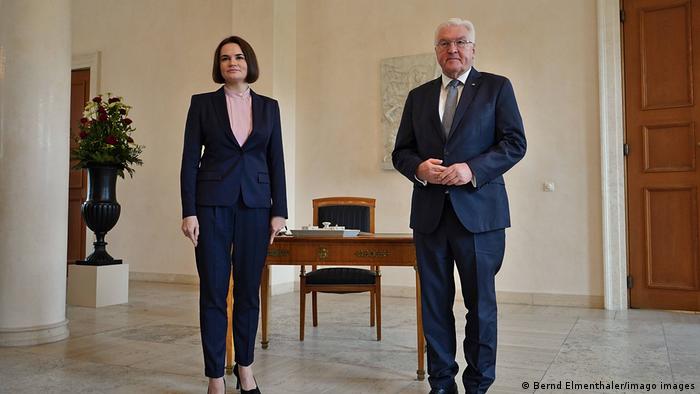 Tsikhanoukaya had also met with German President Frank-Walter Steinmeier on Thursday, where they discussed the "hybrid attack of Belarus' dictator."

What led to the current tensions between the EU and Belarus?

Lukashenko defeated Tsikhanouskaya in last year's presidential elections in a landslide victory, with Western countries viewing his win as illegitimate amid reports of fraud. Lukashenko has cracked down on opposition groups and the media since the election.

Last year's controversial election, along with a state-ordered forced landing of a Ryanair flight over Belarusian airspace in May, have led to the current crisis between the EU and Minsk.

Lukashenko said Thursday that he could potentially cut off natural gas transit to Europe if the EU moves forward with additional sanctions. Tsikhanouskaya told news agency AFP in a separate interview that Lukashenko would not follow through with the threat.