Michael O'Leary, the budget airline's CEO, said Belarus falsely claimed there was "a bomb on board" a Ryanair flight in order to detain a dissident journalist, adding that air traffic control in Minsk lied to the pilot. 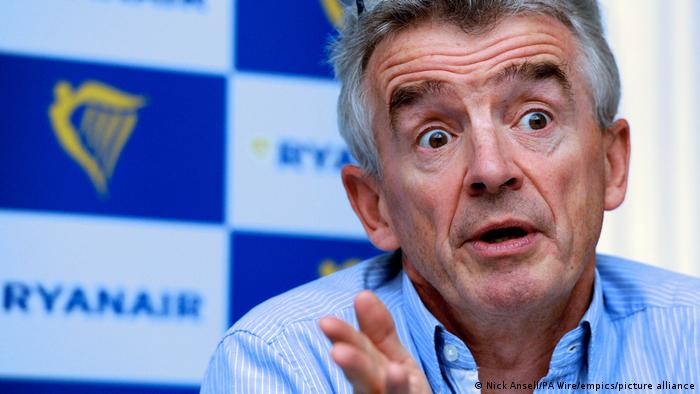 Belarus broke "all international aviation rules" after it falsely claimed there was "a bomb on board" a Ryanair flight in order to detain a dissident journalist, the airline's CEO told British lawmakers on Tuesday.

The pilot of a Ryanair flight that was diverted to Belarus on May 23 leading to the arrest of Raman Pratasevich, had no choice but to land the plane in Minsk, Michael O'Leary told a parliamentary committee.

The scheduled flight from Greece to Lithuania altered its course and landed in the Belarusian capital, after Minsk air traffic control warned the flight crew of a "credible threat" to security as there was "a bomb on board" that "would be detonated," O'Leary said.

"This was clearly a premeditated breach of all the international aviation rules, regulations, safety," O'Leary said. He said the pilot was put under "considerable pressure" to land in Belarus instead of the more standard options of Poland or other Baltic countries.

"He wasn't instructed to do so, but he wasn't left with any great alternatives," the airline's CEO told members of the committee.

After the plane landed, several "unidentified persons" entered the aircraft with video cameras, according to O'Leary.

They "repeatedly attempted to get the crew to confirm on video that they had voluntarily diverted to Minsk," O'Leary continued. However, he said the air crew did not give such confirmation.

Western nations have described the forced landing a "hijacking" by Belarus.

O'Leary said he did not support continuing such flight bans in the long term.

"We cannot have a situation whereby airlines, air travel, our customers and our citizens run the risk of being hijacked and diverted under false pretenses," he said. "But equally, far more UK citizens will be disrupted as a result of long-haul flights between the U.K. and Asia, for example, now having to fly around Belarus or avoiding Belarusian airspace."

The Nobel Prize winner from Belarus is being recognized as a leading intellectual in the opposition movement against long-time ruler Alexander Lukashenko.

The Russian opposition politician Dmitry Gudkov was forced to flee his country last week. Speaking from his exile in the Ukrainian capital, he told DW why.

South Africa condemns the budget airline over its Afrikaans language test requirement for nationals headed for the UK. Ryanair says the test is being used to curb a high prevalence of fake South African passports.

Airlines hoping to cash in on renewed demand are facing labor agitation after firing swathes of workers during the pandemic.