EU foreign ministers said they are willing to punish Lukashenko. Germany's Heiko Maas had earlier demanded the Belarusian leader be sanctioned for violence against protesters. 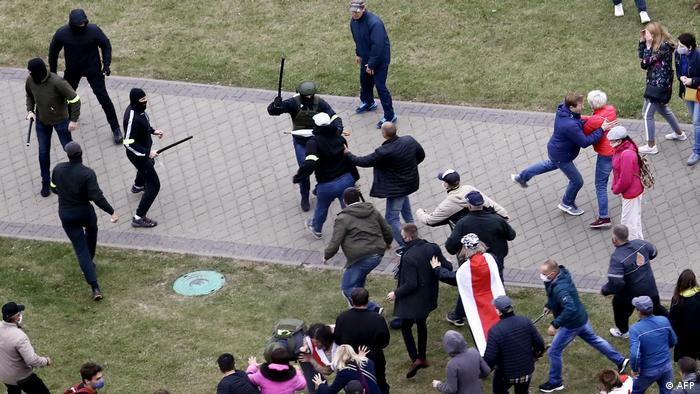 The EU says it is willing to impose more sanctions on those linked to a crackdown on protesters in Belarus, including the country's leader Alexander Lukashenko.

Foreign ministers met in Luxembourg on Monday to mull their response to the ongoing demonstrations over the disputed president election on August 9th.

In a statement, they said that the EU "strongly condemns the violence employed by the Belarusian authorities" and that the bloc "stands ready to take further restrictive measures, including against entities and high-ranking officials, including A. Lukashenko."

But the 27 ministers stopped short of meeting Germany's demand earlier on Monday of slapping sanctions on the Belarusian leader right away,

"As before, there are arrests of peace-loving demonstrators. That's why we need to consider how things continue there," German Foreign Minister Heiko Maas said prior to his meeting with EU counterparts.

"We have to acknowledge that since our last meeting nothing has improved. The Lukashenko regime continues to exercise violence, we still see arrests of peaceful demonstrators," Maas said.

"I proposed to pave the way for another sanctions package, and Lukashenko should be one of the people on this sanctions list," he added.

The EU imposed new sanctions on 40 officials in early October, but not yet on Lukashenko.

There was a consensus on one issue between the 27 EU foreign ministers after they agreed to a Franco-German proposal to implement sanctions on Russians suspected of poisoning Kremlin critic Alexei Navalny.

The minsters said they had yet to receive a credible explanation from Russia over the incident. Their suspicion was heightened after the Organisation for the Prohibition of Chemical Weapons (OPCW) confirmed they had uncovered evidence of the banned nerve agent Novichok in Navalny's body.

And Germany's Maas said the poisoning could not "remain without consequences."

"France and Germany propose imposing sanctions on certain people that caught our eye in this respect," the German foreign minister said.

The sanctions are not expected to be given the green light immediately as legal texts must be prepared and then approved by experts from the 27 EU member states.

Ahead of a meeting with Chancellor Merkel, exiled leader Sviatlana Tsikhanouskaya told DW that "Germany is one of the most powerful countries in the world and can be very helpful" in resolving her country's crisis.

The pair discussed the plight of the Belarusian people following August's disputed election that left Alexander Lukashenko still in power. Tsikhanouskaya also visited the Berlin Wall, calling it a "symbol of freedom."

Belarusian opposition leaders say the strongman's visit to a Minsk jail to meet his foes is a sign of weakness. After weeks of protests over his disputed election win, Lukashenko is now hinting at reforms.