A day after President Alexander Lukashenko met with detained opposition leaders, authorities cracked down on protesters in Minsk. Sviatlana Tsikhanouskaya said the opposition will continue to demand fresh elections. 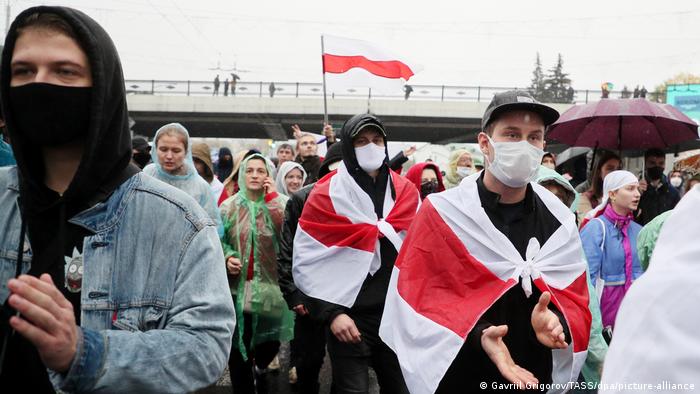 Belarus police relied on force to disperse protesters gathered in the country's capital, Minsk, on Sunday for a march to show their opposition to the government of strongman leader Alexander Lukashenko.

Large numbers of black-clad masked police, internal troops and men in plainclothes could be seen emerging from unmarked minibuses and running towards protesters in Minsk, pulling some to the ground, witness footage on independent news sites showed.

"In Minsk at least, water cannon and stun grenades were used," interior ministry spokeswoman Olga Chemodanova said. Protesters are still gathering to call for an end to the regime of the Lukashenko, who claimed victory in the recent presidential election in August.

Neither the EU nor the US recognized Lukashenko's inauguration for a sixth term, saying the polls were not free and fair and condemning alleged abuse and torture of detained protesters.

Protesters came out on Sunday with umbrellas, as it was a rainy afternoon. The latest of weekly demonstrations since the election, protesters dubbed it the "March of Pride."

Sunday's violence came a day after Lukashenko held a meeting in a Minsk jail with detained opposition leaders, an unusual event that raised questions about whether he was preparing to make concessions.

Frank Viakorka, member of the opposition and adviser to its leader Sviatlana Tsikhanouskaya, shared images of the protests and said the crackdown was proof Lukashenko was not serious about talks to resolve the conflict.

"This is how Lukashenka conducts a dialogue with peaceful protesters. Hundreds of men and women detained, many injured and wounded. People did not manage even to gather," he wrote.

The Viasna rights group, which monitors detentions at political protests, said at least 39 people had been detained in Minsk as well as around a dozen in other cities.

Russia's Interfax news agency said that some 50 people had been detained and that police had used stun grenades to dispel demonstrators.

Tsikhanouskaya, who is now based in Lithuania, has called for new elections and for all political prisoners to be freed.

"We will continue to march peacefully and persistently and demand what is ours: new free and transparent elections," she wrote on her Telegram channel on Sunday.

Belarus has responded to new EU sanctions by canceling the accreditation of all foreign journalists and drawing up a travel blacklist forbidding entry. DW's editor in chief called the revocations "absurd."

After Belarus accused Lithuania and Poland of "destructive" meddling, several EU countries temporarily pulled their envoys out of Minsk. Bulgaria called for "immediate and unconditional" release of political prisoners.