Belarus has responded to new EU sanctions by canceling the accreditation of all foreign journalists and drawing up a travel blacklist forbidding entry. DW's editor in chief called the revocations "absurd." 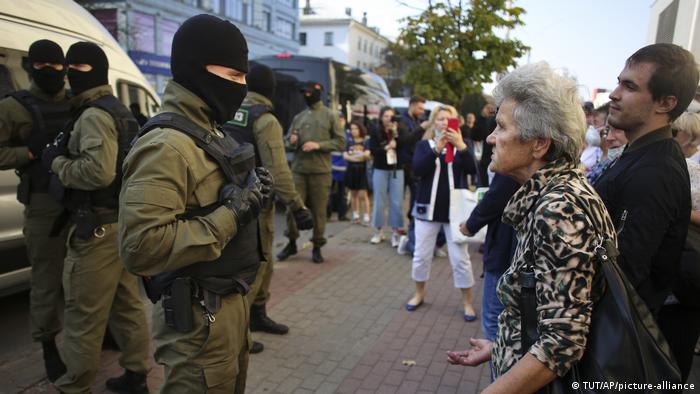 The Belarusian Foreign Ministry said Friday it had canceled existing press accreditation of all journalists working for foreign media organizations in Belarus.

The ministry said in a statement that Belarus was "updating" the procedures for accreditation as current media regulations were "outdated."

However, the new rules come as critical media coverage of Belarus increases amid violent crackdowns on protests against the government of President Alexander Lukashenko and international sanctions being imposed on Belarusian officials.

"It is an absurd suggestion that every single journalist who works for a foreign media organization should have their accreditation withdrawn and then reissued under new rules," said DW Editor-in-Chief Manuela Kasper-Claridge.

"The only possible explanation is that the Belarusian government fears independent media and is using every possible trick to prevent independent reporting," Kasper-Claridge added.

Journalists will be allowed to reapply for press accreditation on Monday under a "streamlined" system, according to the ministry statement.

The ministry also leaves the door open for more curbs on foreign media, emphasizing that the most important job of the new Belarusian "information security" policy is to ensure the country's "information sovereignty."

"In the present situation, we must exercise our sovereign right to apply the necessary protective measures," according to Belarusian authorities.

DW's Kasper-Claridge said the move was "utterly shameful and must be stopped immediately."

"The accreditation system must be made fair and transparent," she said.

The Foreign Ministry also said it compiled a list of people barred from entering Belarus as part of retaliatory sanctions against the European Union.

The ministry said it was introducing "counter sanctions" as a "reciprocal" measure after the EU adopted restrictions Friday against members of Lukashenko's regime.

Officials in Minsk said they would not disclose which EU officials were targeted.

Minsk also recalled its ambassadors from Poland and Lithuania for "consultations" and invited the Polish and the Lithuanian ambassadors in Belarus to "follow this example."

The rebuke is due to "unambiguously destructive activity" from those countries during the current crisis, according to the Belarusian officials.

"We are not going to summon our ambassadors for consultations, and we will definitely not do anything to reduce personnel," he told reporters in Vilnius.

"If the advice becomes a request, then we will take appropriate measures."

Earlier on Friday, after weeks of deadlock, EU leaders agreed on a sanctions regime in response to a brutal  crackdown on protestersfollowing a controversial election the EU has said was rigged to give Lukashenko 80% of the vote.

Some 40 Belarusian officials have been targeted with travel bans and asset freezes, although Lukashenko is not on the list.

The officials on the list are those the bloc accuses of falsifying the election outcome and being behind the violent crackdown on protesters in the aftermath of the August 9 nationwide ballot.

The Kremlin sprang to the defense of its ally Belarus, criticizing the EU sanctions.

"In general we are very, very negative about the sanctions policy... this is more a manifestation of weakness than strength,"  Russian President Vladimir Putin's spokesman Dmitry Peskov told reporters.