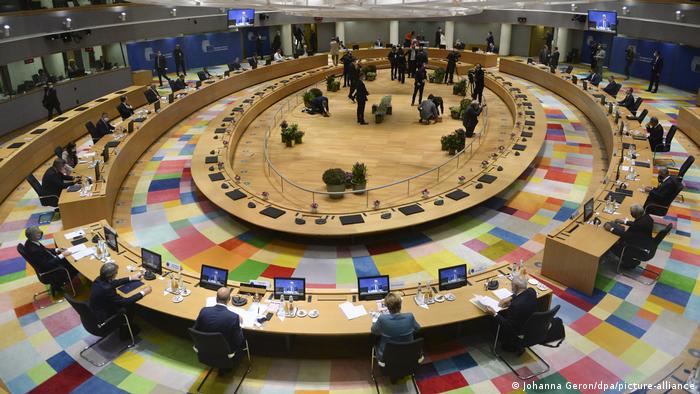 European Union leaders agreed to levy sanctions against officials in Belarus early on Friday, ending a diplomatic standoff with Cyprus by agreeing to send a tough message to Turkey.

The sanctions list targets some 40 senior officials in Belarus who are accused of falsifying presidential election results and being behind the violent crackdown on peaceful protesters in the aftermath of the August 9 election.

"We have decided today to implement the sanctions," European Council President Charles Michel told reporters after chairing an EU leaders' summit in Brussels. "It's very important to do what we decided a few weeks ago,'' and to send a signal that "we are credible.''

Belarusian President Alexander Lukashenko was not included on the sanctions list, although Michel said the bloc "will follow the situation" and that changes could be made. The sanctions include asset freezes and travel bans for those targeted.

EU diplomats said Brussels was holding off on targeting Lukashenko and other top officials as a pressure tactic to encourage negotiations with the opposition and new elections.

Lukashenko could still end up on a sanctions list if he refuses to to talk with the opposition, EU diplomats have said.

The most senior Belarusian officials currently targeted are Interior Minister Yuri Karaev and his deputy.

The measures against Belarusian officials were agreed back in August but had been held up by Cyprus who urged the bloc to take a stronger stance on Turkey over its gas exploration activities.

The two issues are not directly related, but Cyprus argued the EU must be consistent when responding to violations of core principles.

She said EU leaders had "extensive, sometimes difficult discussions" at the summit which started on Thursday with discussions stretching into the early hours of Friday morning. "But we have pulled ourselves together and can point to results."

Belarus has seen near-daily protests and a violent crackdown on demonstrators since the disputed presidential election on August 9. All 27 EU-member states reject the results of the election and have been pushing for a new poll.

The vote saw President Alexander Lukashenko re-elected to a sixth term in office with 80% of the vote. He has held the post since its creation in 1994.

Canada and the United Kingdom have already imposed their own measures against Belarus, but the EU's diplomatic deadlock with Cyprus held up the bloc's sanctions — tarnishing the EU's image.

The United States joined the EU on Friday, imposing sanctions on Interior Minister Karaev and seven other Belarusian officials.

The US Treasury Department said Karaev directed "a law enforcement system that has abused the human rights of Belarusians on streets and in prison cells" at Lukashenko's behest.

Washington had been waiting for the EU sanctions regime to be enacted, in order to have coordinated US and EU sanctions, multiple sources told Reuters news agency.

Washington has had sanctions in place against Lukashenko and his son since 2006.