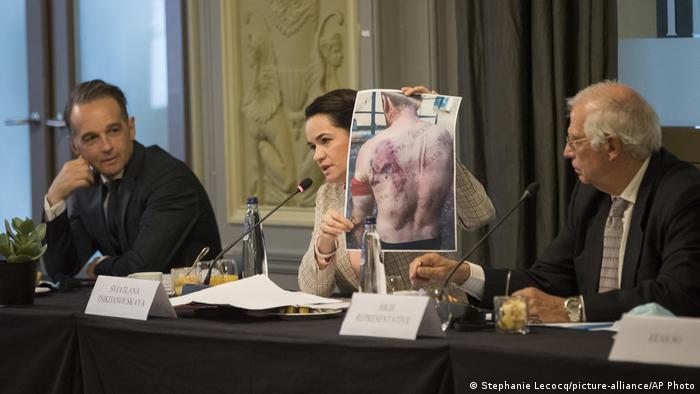 The measures were being considered in response to the election that saw Lukashenko elected to a sixth term in office, and the Minsk government's tough response to protesters who dispute the result.

Cyprus, which has good relations with the Lukashenko-supporting Russian government, had wanted the sanctions to be tied to sanctions against Turkey due to a dispute over gas drilling in the eastern Mediterranean.

Foreign Minister Linas Linkevicius told DW: "This is definitely lamentable ... I hope it will be solved but nevertheless it’s definitely disappointing." A unanimous EU agreement on sanctions against Belarus would not stop Lithuania from helping the Belarusian people, added Linkevicius.

Following the meeting, he tweeted: "Today's failure to agree on sanctions in support of Belarusians, suffering & fighting for democracy, undermine credibility of democratic values they are fighting for."

Latvian Foreign Minister Edgars Rinkevics tweeted that it "sends a wrong signal to Belarusians, our societies and the whole world"

"Although there is a clear will to adopt those sanctions, it has not been possible to do that today because the required unanimity was not reached,'' EU foreign policy chief Josep Borrell told reporters after chairing the ministers' meeting.

"Cyprus is missing to give us unanimity."

What the Belarus opposition said

The ministers opened the debate after meeting Tsikanouskaya, who called for a courageous response.

Speaking to reporters after meeting the ministers at breakfast, Tsikhanouskaya urged Europe to cut any financial support to the Belarus government.

"We did a lot to manage with this situation by ourselves, with only the strength of the Belarusian people, but now I understand that we need exterior help," she said, speaking in English.

Tsikhanouskaya said she understood that some ministers were reluctant, but that financial help would "only go for violence, for killing Belarusian people."

"At this meeting, I asked just to be more brave," she had said.

The August election result showed Tsikanouskaya winning only about 10% of the vote, with Lukashenko — who has been in power for the past 26 years — garnering about 80%. Several people have died in protests since the vote.

Tsikanouskaya was forced to flee Belarus for her own safety after the election.

A history of sanctions

EU nations would need to unanimously approve each individual or organization on it before new sanctions can go into effect.