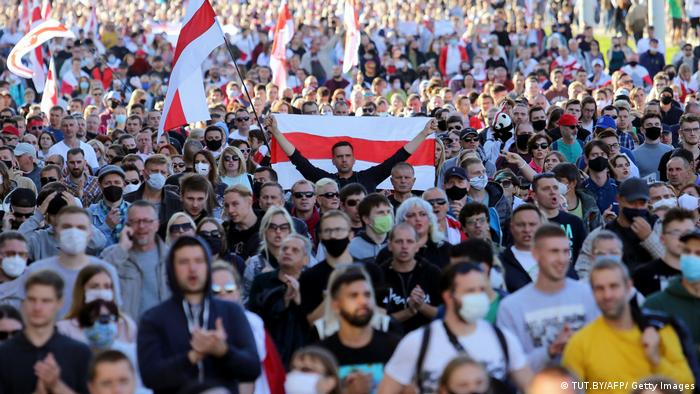 Tens of thousands of protesters, once again, took to the streets in Belarusian capital city Minsk on Sunday, demanding an end to President Alexander Lukashenko's rule.

Hundreds of police and army were out in force to try and stop the so-called March of Justice going ahead.

Late in the day, uniformed men in balaclavas began arresting demonstrators and more than 100 people were detained, according to rights group Viasna.

It said at least 80 were arrested in the capital Minsk, with at least 47 people held elsewhere in the country.

Authorities had closed metro stations in Minsk and mobile internet services were down in an attempt to stop the demonstrators.

It was the sixth Sunday in a row that the March of Justice has gone ahead, a day after the female-driven anti-government Sparkly March, where mass arrests were also made.

Protests first broke out in the former Soviet republic after Lukashenko claimed a landslide victory in a presidential election on August 9.

Security forces have pursued a policy of mass arrests in a bid to deter protesters during the anti-Lukashenko marches. Detainees have accused security forces of carrying out torture and beatings. 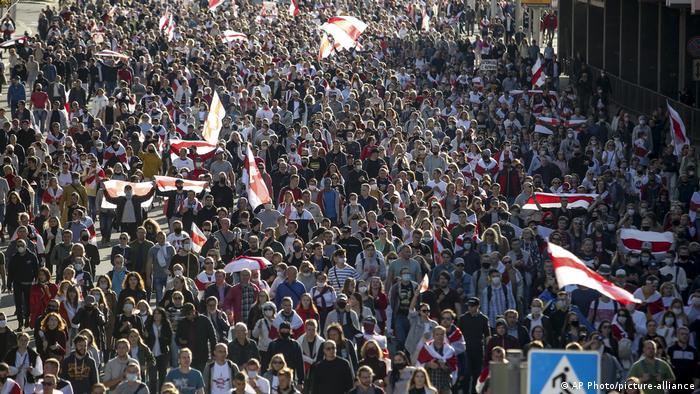 On Sunday, soldiers in combat uniforms armed with assault rifles were waiting at the Palace of the Republic and in side streets as people wearing red and white — the colors of the opposition — streamed into Minsk city center on foot.

Demonstrations were also seen in other cities, including Grodno, Gomel, Vitebsk and Zhodino.

"Every week you show yourself and the world that the Belarusian people are a force," said opposition leader Sviatlana Tsikhanouskaya ahead of the march, from exile in Lithuania.

"You get the feeling that people were more concerned than they were in previous weeks. They had seen the willingness of police to use heavy-handed tactics, even with women," DW correspondent Nick Connolly reported from the protests in Minsk.

"It seems that this is having the opposite effect, bringing out more people against the government who maybe had previously stayed home but were outraged at the violence being used."

While the pattern of weekly protests and detention looks as though it has not changed much, Connolly said protesters remained hopeful. "People are seeing this as a job that they have to continue," he added.

Belarusians have endured Lukashenko since he took power in 1994 — the first year the seat of president was created, following the collapse of the Soviet Union.

Following a referendum in 1996, he dissolved the parliament and Supreme Court. He acquired the power to single-handedly impose laws. The opposition has been suppressed ever since.