In Belarus, 150,000 people have again protested peacefully against President Alexander Lukashenko. Fearing for his power, the Belarusian strongman's antics are getting increasingly desperate, says Juri Rescheto. 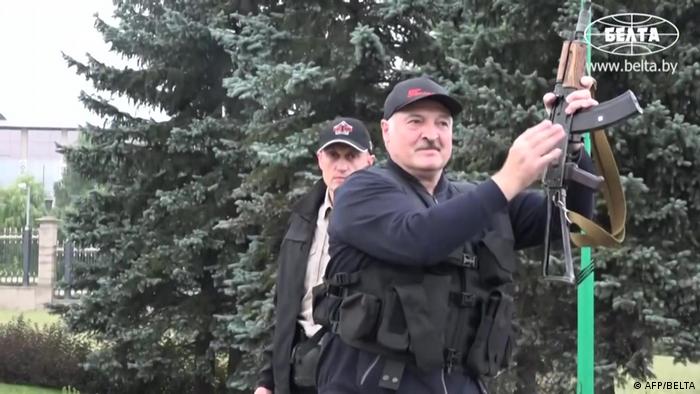 Over the past 26 years, the people of Belarus have seen many sides of Alexander Lukashenko prior to and during his presidency. And he has never ceased to surprise.

Forget the Lukashenko who was head of a kolkhoz — a Soviet state farm — and joined ordinary people in planting potatoes. Forget Lukashenko the apparatchik who would regularly talk down to his unmotivated ministers, and even to children. Forget Lukashenko the coronavirus denier, who as the pandemic began made a name for himself as a leader who recommended citizens consume 100 grams of vodka to avoid infection. Ironically, he himself later contracted the virus. Forget Lukashenko the macho misogynist who mocked female politicians and attempted to demean his rival Sviatlana Tsikhanouskaya as "a little girl who does not know what she is doing."

Forget, too, the Lukashenko who would occasionally adopt a more humble role, too. Following his recent and disputed re-election as president, Lukashenko cast himself as a modest servant of the people, seemingly surprised by the wave of protests that erupted against his rule. Indeed, video footage of him addressing factory workers — once his loyal support base — and being booed on stage made headlines.

All that is in the past. Now, the people of Belarus have been left shocked after seeing grainy footage released by the country's state broadcaster. It shows Lukashenko in a helicopter, flying to his Minsk residence. With a serious mien, dressed in a black Kevlar vest and donning a black baseball cap, the president is seen ordering the pilot to fly closer to protesters staging a rally near his residence. He is heard dismissing them as rats.

Afterwards, Lukashenko disembarks the helicopter, Kalashnikov assault rifle in hand, and marches over to the nearby protesters. After reaching black-clad security officers keeping them at a distance, he threatens his critics: "You've got it coming!"

Lukashenko is desperate to show he will stop at nothing to hold onto power. In reality, however, he is standing with his back against the wall, out of options.

Lukashenko's movie-like, Rambo-esque performance, complete with combat gear and gun in hand, has done nothing to help his standing. On the contrary. This is the president of a European country in the 21st century acting this way, with an assault rifle in his hand, no less.

He claims to have won 80% of the vote at the recent presidential elections. A president who could legitimately claim such a thing should instead be mingling with the masses. But of course, the election was widely decried as a sham.

And what of the Belarusian people in the face of all this? Some 150,000 peaceful protesters turned out in recent days on the capital's Independence Avenue, demanding Lukashenko's resignation. They were at pains to avoid antagonizing the police, even changing the route of the march to ease tensions. Many were seen chanting, singing, even hugging soldiers, and handing out flowers.

Three decades after forming a mass human chain for their own independence, thousands in the Baltic states did it again for Belarus. The protest action took place as tens of thousands demonstrated in Minsk.

Colombia and Venezuela reopen border crossing after 7 years 9h ago

Opinion: Italy's shift to the right is dangerous for EU 12h ago