The opposition leader gave her first press conference since fleeing the country. Earlier, she called on workers to step up their strikes in a bid to make President Lukashenko resign. 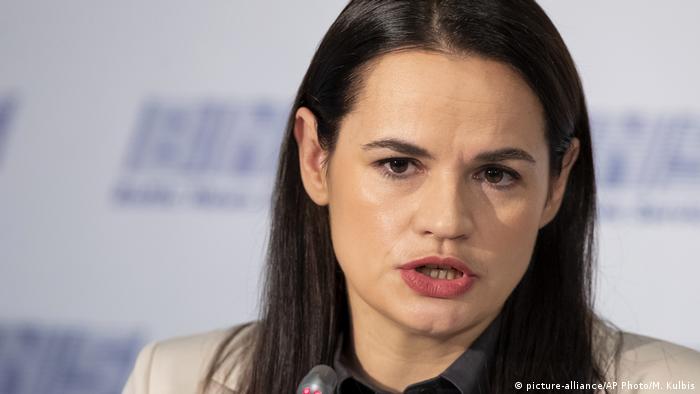 "It should be clear to the president that there is a need for change. I hope that good sense prevails and the people will be heard and there will be new elections," said Tsikhanouskaya.

Tsikhanouskaya said she planned to return to Belarus "when I feel safe there." The opposition leader fled to the neighboring country on August 11.

Earlier, Tsikhanouskaya had called on workers to increase their strikes at factories across the country to try to force new presidential elections.

"I ask you — continue and expand strikes," she said in a video posted on YouTube. "Don't be fooled by intimidation."

The protests broke out after controversial presidential elections saw Lukashenko win his sixth term in office with 80% of the vote. His opponents say the vote was rigged and illegitimate.

He is the only person to have held the position since the post was formed in 1994 after the break-up of the Soviet Union.

Workers and protesters want Lukashenko to resign and for new elections to be held. They also want an end to the brutal police violence against protesters.

Belarus Protests: How Will Putin React?

Read more: Opinion: Putin wants Belarus in Moscow's orbit, with or without Lukashenko

"Millions have already been donated to support funds," she added.

Meanwhile, the EU Commission rejected an investigation launched by prosecutors on Thursday, alleging that the anti-Lukashenko Coordinating Committee was set up as an illegal attempt to seize power.

"We expect the Belarusian authorities to stop the criminal case and instead to engage in a dialogue in view of moving towards a peaceful way out of the current crisis," Nabila Massrali, an EU foreign policy spokeswoman, said in a statement.

Where are workers striking?

The strikes have spread to state television as well, with staff walking out on Monday.

Lukashenko has said there will be no new presidential election despite the strikes and protests.