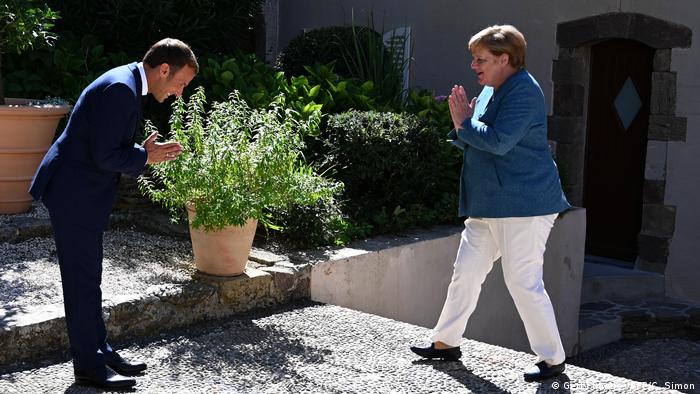 The leaders of Germany and France discussed the worsening political crisis in Belarusduring talks at French President Emmanuel Macron's summer retreat on the Cote d'Azur on Thursday.

At a news conference with German Chancellor Angela Merkel following a two-hour meeting, Macron said the European Union could try to mediate an end to the deep public discontent over the disputed election win for strongman Alexander Lukashenko.

Macron said the Belarusian people must find a solution but said that Brussels stands ready to help and insisted that Russia — the ex-Soviet state's closest ally — should be included in the dialogue.

But he also warned Moscow against any aggressive intervention in its neighbor's affairs.

Merkel, meanwhile, said that Lukashenko "has not sought to speak to any of us [EU leaders]," despite facing a growing post-election protest movement that has brought hundreds of thousands of people onto the streets.

Some protesters gathered again in Minsk on Wednesday evening, defying Lukashenko's latest order to his police to clear the streets of the capital after a week and a half of rallies against his rule.

Demonstrators have rejected the president's victory in an August 9 vote his opponents say was rigged, fuelling the country's biggest political crisis since the breakup of the Soviet Union.

As well as Belarus, the two leaders discussed the ongoing tensions in the Mediterranean between Greece and Turkey about the right to prospect for oil, along with Mali's military coup and the coronavirus pandemic and its implications at the European level.

The two were instrumental in pushing through an EU-wide deal last month that saw member countries approve the joint issuance of debt for the first time, in an effort to provide funds for countries hardest hit by the virus' spread.

The rescue plan, which is worth €750 billion ($858 billion), represented a special victory for Macron, who came to office in 2017 committed to strengthening the European Union but has struggled to deliver.

Attention is now turning to what else the duo can deliver in the time left before they get distracted by the German chancellor's succession and France's 2022 presidential election.

The two leaders meanwhile called for an investigation into the apparent poisoning of Russian dissident Alexei Navalny, who
was in a coma on Thursday after being taken ill on a domestic flight.

"What is very, very important now is that it [the hospitalization] is urgently clarified: How did this situation come about? We will insist on that," said Merkel

Merkel was greeted by Macron and his wife Brigitte in the fortress courtyard on her arrival.

The seaside stronghold, on the French Riviera, is not a new scene for diplomatic encounters.

Macron met Russian President Vladimir Putin there last summer ahead of the summit of the G7 group of major industrial powers, a group from which Russia was excluded after invading Ukraine's Crimea region in 2014.

The last German chancellor to visit was Helmut Kohl, invited by Francois Mitterand in 1985.

For years, Belarusians have staged intermittent street protests. Why is the resistance so much stronger this time? What role are women playing? And how has the coronavirus pandemic fueled the resistance?