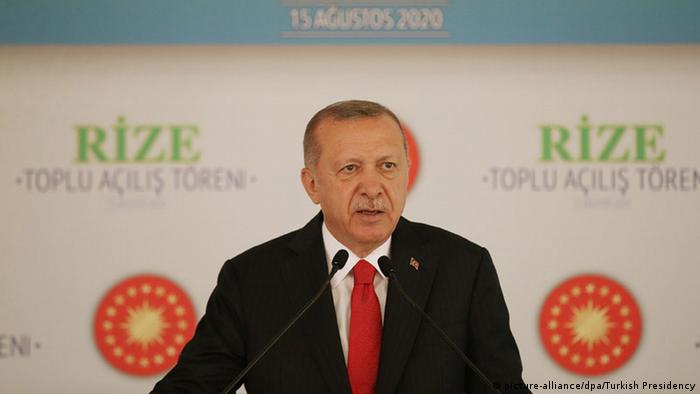 International efforts will not stop Turkey from carrying out energy research in disputed eastern Mediterranean waters, said President Recep Tayyip Erdogan on Saturday, amid rising pressure from Greece and the EU.

"We will not back down in the face of sanctions and threats," said Turkey's president, speaking in the northeastern city of Rize. "We will never bow to banditry on our continental shelf."

Turkey dispatched scientific vessel Oruc Reis on Monday into disputed waters not far from Cyprus to search for oil and gas in the energy-rich waters. The move prompted Greece to dispatch its own military vessels to monitor the situation and sparked a war of words between the two rivals.

The EU and Greece both claim Turkey's drilling in the region is illegal. EU lawmakers condemned Turkey's naval movements during a video conference on Friday and urged de-escalation.

Turkey claims the area is within its exclusive economic zone.

"On this question, our country is entirely in the right and we will continue to defend our rights, using all the means at our disposal," Erdogan promised in Saturday's televised comments.

The Oruc Reis, which is between Cyprus and the Greek island of Crete, will continue work until August 23, he added.

They said a deterioration in the relationship with Turkey was having far-reaching strategic consequences for the entire EU, well beyond the eastern Mediterranean.

France on Thursday announced it was "temporarily reinforcing" its presence in the eastern Mediterranean in support of Greece.

Neighbors Greece and Turkey are old rivals and have had multiple disputes over the years. These have ranged from the boundaries of offshore continental shelves and airspace to the ethnically split island of Cyprus. In 1996, they almost went to war over ownership of uninhabited islets in the Aegean Sea.