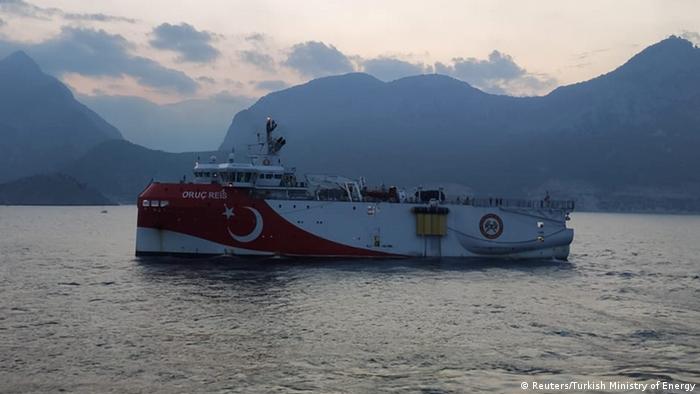 Greece on Monday accused NATO ally Turkey of "threatening peace" in the eastern Mediterranean after Ankara resumed searching for oil and gas near the remote Greek island of Kastellorizo.

Stoltenberg urged respect for international law during his conversation with Mitsotakis.

"The situation must be resolved in a spirit of Allied solidarity and in accordance with international law," Stoltenberg tweeted.

"Further seismic exploration at this point is certainly the wrong signal," a German foreign ministry spokesman said, adding that Athens and Ankara should engage in dialogue.

"Let us all come together as Mediterranean countries and find a formula that protects all of our rights," Turkish President Recep Tayyip Erdogan said on Monday in a national address after a meeting with his own ministers, striking a comparatively conciliatory tone.

"We cannot allow [nations] to ignore a big country like Turkey and try to imprison us to our shores."

Turkey dispatched the research ship Oruc Reis to the region on Monday — just three days after Erdogan said he was tired of waiting for the outcome of sporadic talks held in the past month with Greece and the EU's current presidency holder, Germany.

Erdogan last month said he was "suspending" gas exploration to give time for talks with Greece and Germany after a request from German Chancellor Angela Merkel.

The mood changed, however when Greece and Egypt — a rival to Turkey in Libya — last week signed a deal for an exclusive economic deal in the region.

Turkey's foreign ministry had said the "so-called maritime deal" was "null and void."

A spokesman for Turkey's Foreign Ministry, Hami Aksoy, defended the Oruc Reis's research on Monday and accused Greece of being responsible for the current tensions, pointing to the "pirates' agreement" Athens signed with Cairo as a sign that it wasn't sincere about dialogue.

French President Emmanuel Macron last month called for sanctions against Turkey, saying it was "not acceptable for the maritime space of a European Union member state to be violated or threatened."

Turkey has rejected the criticism and claimed that it is well within its rights — or those of Turkish Cypriots — to explore areas claimed by Cyprus and Greece.

Turkey's energy minister, Fatih Donmez, referring to Turkey's population, tweeted that "83 million back the Oruc Reis'' after the vessel arrived in its area of operation Monday morning.