Belarus protests have roots in Lukashenko′s repression | Europe | News and current affairs from around the continent | DW | 19.08.2020

For years, Belarusians have staged intermittent street protests. Why is the resistance so much stronger this time? What role are women playing? And how has the coronavirus pandemic fueled the resistance? 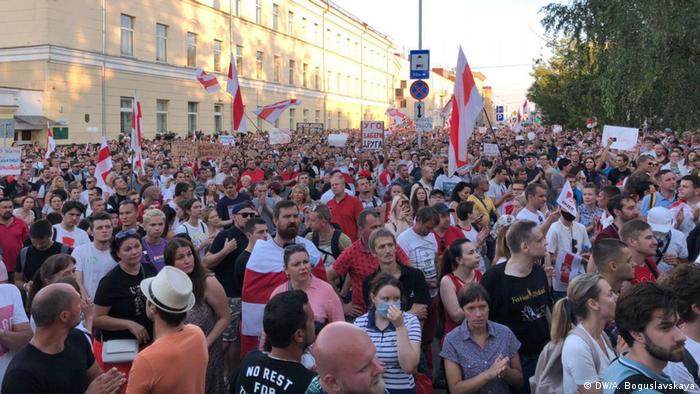 Since the August 9 presidential election, thousands of Belarusians have taken to the streets in opposition to authoritarian President Alexander Lukashenko. On Sunday, more than 100,000 people gathered in the capital, Minsk, to call for his resignation.

Read more: What's at stake in the EU emergency summit on Belarus?

Protests erupted after the results of the presidential election were announced. The Central Election Commission reported that Lukashenko had taken a staggering 80.1% of the vote.

Belarusians have endured Lukashenko since he took power in 1994 — the only  election that was not rigged in his favor, analysts say. Just one month after taking control, Lukashenko brought television broadcasters under his control. Following a referendum in 1996, he dissolved the parliament and Supreme Court. He acquired the power to single-handedly impose laws. The opposition has been suppressed ever since.

Lukashenko's regime has deployed water cannons and tear gas over the past week and a half. At least 6,700 people have been arrested; government forces have killed several protesters. The violent official response has only further galvanized the opposition. It is expected that the protest movement will continue to grow in the coming days.

Though there have been intermittent protests against the government during Lukashenko's reign, the current mobilization is unprecedented. "This time, the opposition is symbolically charged, and there is real hope for fundamental change," Krawatzek said. "People were furious about this massive vote-rigging and took to the streets," he added.

The protest movement started with young Belarusians and has grown to include people of all ages and from all walks of life. Factory workers have protested alongside members of the symphony orchestra. The resistance is not limited to the capital, Minsk: Rallies are being held nationwide.

Despite a considerable number of coronavirus infections, the regime refused to impose restrictions on public life to slow its spread. Schools and shops remained open; public events were still held. "This led many to question whether the regime even cares about its people," Krawatzek said. Many young Belarusians have lost their jobs during the pandemic, giving them a deep sense of frustration — and free time to protest.

Many women have joined the rallies, often barefoot, wearing white, with flowers in hand. Whenever possible, they hug Belarusian police officers, putting flowers on their shields. "This alters the protest strategy, pitting peaceful resistance against state violence," Krawatzek said.

He added that opposition politicians such as Sviatlana Tsikhanouskaya, Maria Kolesnikova and Veronika Tsepkalo had helped draw women to the protest movement. "Their authenticity, humility and credibility have helped mobilize the masses," Krawatzek said. "They encouraged other women to become politically engaged."

There are similarities between the 2014 Euromaidan protests in Ukraine and the rallies being staged in Belarus. The movements both started by making a public issue of political corruption. A key difference, however, is that the protests in Ukraine erupted over the broad public desire to align the country with the European Union, rather than Russia, and the movement in Belarus has focused on the rigging of elections and Lukashenko's repressive regime. "This movement is not about becoming part of Europe," Krawatzek said, "but about political self-determination."