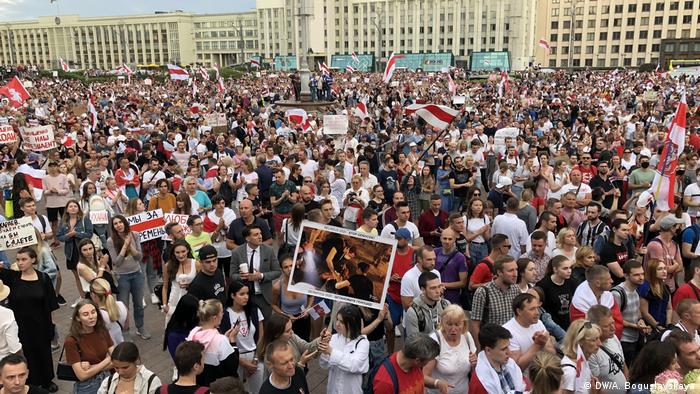 Belarusian President Alexander Lukashenko is a master of self-deception. Each year, the ardent ice hockey fan organizes tournaments that — rather unsurprisingly — his own team ends up winning. I once watched one of the games. The president's team was leading by a huge margin. But Lukashenko himself was struggling to score, even though the opponents, a professional Austrian squad, were holding back without challenging him. At some point, the goaltender even moved aside, clearing the way for a shot. Lukashenko finally did score, to the relief of his team and the opponents. 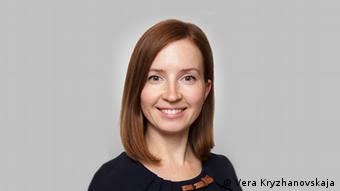 The president had no problem celebrating this rigged hockey victory. And neither has he had any qualms celebrating his rigged reelection on August 9, with the Central Election Commission claiming Lukashenko had taken a staggering 80.1% of the vote. Lukashenko knows full well that this was a sham election, yet he has claimed that the growing opposition against his rule within Belarus has been orchestrated by "foreign agents."

On Monday, Lukashenko addressed workers in the capital, Minsk, who are striking to protest the official election result. The president, who once considered the working class his electoral base, was met with chants of "get lost!" Footage of the historic event, which gave me goosebumps, soon spread over the internet. For decades, Belarusians feared Lukashenko's regime so much they never dared speaking out. They were scared that any criticism could be met with steep fines, trouble at their workplaces, bullying and even imprisonment. Many Belarusians avoided discussing touchy subjects or claimed that they were not interested in politics.

Lukashenko has often talked down to ordinary people — at times referring to them as sheep — and showed little respect toward even the ministers he has appointed to his own government. Now, however, he is reaping what he sowed. Belarusians have had enough of being disrespected and having their rights trampled on.

Read more: What's at stake in the EU emergency summit on Belarus?

They consider their nation tolerant and peaceful. Indeed, Lukashenko has gone to great lengths to promote this perception. After all, having your subjects believe that they can endure anything is ideal for an undemocratic  authoritarian regime.

Now, however, Belarusians appear much less willing to endure the injustice. Unlike in previous years, when Lukashenko's elections results were only slightly adjusted upward in Lukashenko's favor, this year's vote was a blatant sham. Belarusians have had enough. And they are making their anger known.

Would instituting sanctions be a way for the European Union to support Belarusians' fight for fairer elections? Hardly: Lukashenko has grown used to sanctions. A ban on travel to EU member states would mean nothing to a president who could just as easily take his vacations in Sochi, on Russia's Black Sea coast.

EU statements that "condemn" Lukashenko and "urge" him to change his ways have had little effect. A president so powerful that he can change the fates of his domestic critics in an instant will not be deterred by rhetoric from abroad. Declaring the recent elections illegitimate will not impress Lukashenko. The European Union has criticized Belarusian election fraud in the past. It changed nothing.

Still, the European Union cannot remain idle. EU officials should seek talks with the only leader in the world who has any influence over Lukashenko: Russian President Vladimir Putin. The European Union must make it clear to Putin that military intervention in Belarus on behalf of Lukashenko would have catastrophic political and economic consequences and would lead to further EU sanctions on Russia.

This approach would genuinely help Belarusians, who are beginning to realize that their peaceful resistance to Lukashenko's regime is proving effective. The authoritarian leader's grip on power could be waning.

Strong winds blow out the power, disrupts trains in parts of western Europe 2h ago

Opinion: Navalny's struggle goes beyond an anti-corruption crusade 20h ago