EU leaders, including German Chancellor Angela Merkel, say the bloc does not recognize Belarus' election result. They have also vowed sanctions over violence against protesters. Here's how the day unfolded. 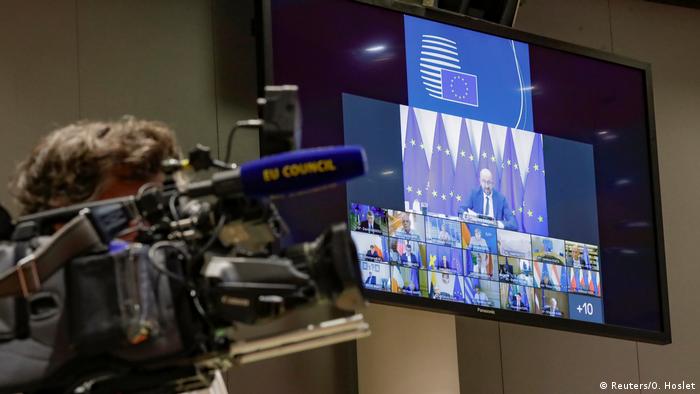 17:55 That's the end of today's DW live blog on the political crisis in Belarus. Protests are expected to continue into the night, with demonstrators calling for the resignation of President Alexander Lukashenko. DW will continue to monitor the situation and keep you up-to-date with the latest developments.

16:57 German Vice Chancellor Olaf Scholz said that Belarusian President Alexander Lukashenko should step down, as he had "lost all legitimation." Scholz, who has been chosen as the Social Democrat candidate to run for chancellor at Germany's next federal elections, said the EU "should actively support the process of self-liberation by Belarusian citizens." His comments came in an interview with newspapers of the Funke media group.

16:17 Belarus' Defense Ministry has ordered the military presence at the borders with Poland and Lithuania to be strengthened, according to a statement cited by the Russian TASS news agency. A guided missile division, anti-aircraft equipment and drones are to be sent to the region, according to TASS.

15:37 Poland's Prime Minister Mateusz Morawiecki rejected accusations of interference in Belarus' domestic affairs leveled at Warsaw by Belarusian President Alexander Lukashenko. "It is clear that Poland would like to help Belarus as its neighbor, but that has nothing to do with interference in internal affairs," he told the PAP news agency, adding; "When non-democratic regimes have problems in their own countries, it frequently occurs that they point the finger at some external enemy."

14:40 Lithuania's President Gitanas Nauseda became the latest EU leader to directly address Alexander Lukashenko following the summit in a public statement, warning him not to take any steps that could lead to "bitter sorrow."

"The only way towards reconciliation is to solve the conflict peacefully. Nothing must be done towards the society that could lead to bitter sorrow," Nauseda told reporters, apparently in response to Lukashenko's call to send in the police to deal with protesters.

14:17 Hours after condemning Western interference in Belarus, Lukashenko directly accused European Union governments of their "direct responsibility for fomenting unrest" in the country.

14:00 The Belarusian central election committee confirmed they will inaugurate Alexander Lukashenko for his new term within two months, the Russian news agency TASS reported. The announcement comes despite the widespread protests and accusations that the vote was rigged.

Several former members of the election committee were detained when they spoke out against Lukashenko.

13:58 DW's correspondent Nick Connolly reported that hundreds of protesters were once more in the streets of Minsk on Wednesday lunch time.

13:55 Following talks among EU leaders, Poland's Prime Minister Mateusz Morawiecki called on the EU to make the Belarusian economy less dependent on Russia. He added that there will soon be measures in place to simplify the process for Belarusians trying to come to Poland — but that "at the moment there are no reasons for concern" over the border crossing.

13:30 The EU will give €53 million ($63 million) originally earmarked for the Belarusian government to civil society in the country, victims of the state's crackdown on protesters and the country's efforts to fight the coronavirus pandemic, von der Leyen said.

13:25 Von der Leyen said Belarus' future must be decided by the people of Belarus.

13:17 At a video conference after the European Council meeting, its president, Charles Michel, said the violence against peaceful protesters was shocking and unacceptable.

13:11 German Chancellor Angela Merkel said the states of the EU do not recognize the result of the presidential election in Belarus.

12:56 DW correspondent Nick Connolly was in Minsk, meeting with protesters to hear more about why they are taking to the streets. One student who was protesting said: "I'm only 20 and all that time I’ve lived under Lukashenko. He’s the scariest person you’ve ever seen. When I got to Minsk and found out what happened I cried for two days."

12:30 Dutch Prime Minister Mark Rutte tweeted that the EU, including the Netherlands, "cannot accept the results of these elections."

11:27 Belarusian President Alexander Lukashenko said Western countries should focus on their own problems instead of on what is happening in Belarus.

"I would want for them to first and foremost consider the protests against coronavirus isolation in Germany and other countries in Europe," he said in comments carried by state news agency Belta.

"They have a lot of problems. They should not point to Belarus to divert attention from the problems that exist in France, the US, Germany and so on."

He also ordered police in Minsk to put down protests, saying people were "tired" and demanding "peace and quiet."

He said there was no need for outside mediation in the ex-Soviet state, adding that statements from EU countries were driven by geopolitics.

France and Germany have appealed to Moscow, a close Belarus ally, to push for dialogue to resolve the crisis peacefully.

Meanwhile, the Kremlin said it saw no need for Russia to help Belarus militarily or otherwise.

Spokesman Dmitry Peskov said outside interference in Belarus was unacceptable, and that the situation should be solved internally by Belarusians themselves.

10:15 EU leaders kicked off an emergency video summit to discuss the political crisis in Belarus.

EU Council President Charles Michel tweeted that the bloc's member states had a clear message: "Violence has to stop and a peaceful and inclusive dialogue has to be launched."

"The leadership of #Belarus must reflect the will of the people," he said.

Belarus has been rocked by mass protests since authoritarian President Alexander Lukashenko claimed a landslide victory in elections on August 9. The opposition accuses the 65-year-old of rigging the vote to secure a sixth term after 26 years in power.

Ahead of the EU meeting, Belarusian opposition politician Sviatlana Tsikhanouskaya urged leaders not to recognize the "fraudulent elections."

"The August 9 elections were neither fair, nor transparent. The results were falsified," Tsikhanouskaya said in a video message, which was delivered in English. "Lukashenko has lost all legitimacy in the eyes of our nation and the world."