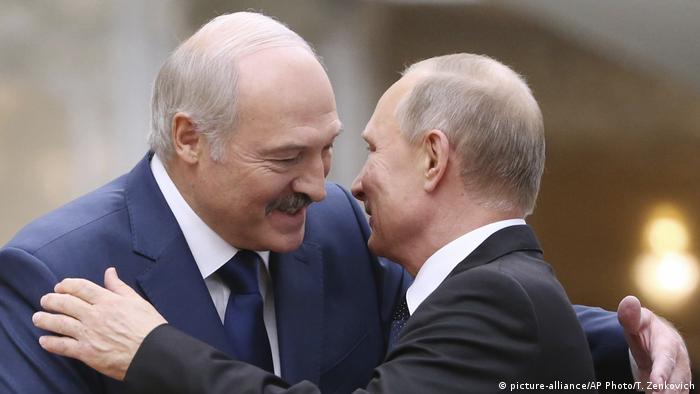 While EU leaders held a special summit on the situation in Belarus and refused to recognize the election result, Alexander Lukashenko suddenly sprang into action.

Now that the EU has denied him legitimacy, he is free to behave as he likes. There is no more need for him to pretend that the voice of Brussels matters. At the meeting of his security council, he demanded that police "suppress" opposition rallies in the capital Minsk — "disturbances" as he called them.

Somewhat predictably, Lukashenko also blamed "foreign interference" for the anti-government protests and ordered his diplomats to warn Western leaders, including German Chancellor Angela Merkel, that he will hold them "responsible for meddling" in Belarus.

His rediscovered assertiveness may be the result of four telephone conversations Lukashenko has held with Vladimir Putin. The Russian president is the only real ally the strongman in Minsk still has. Despite their perceived personal dislike of each other, Putin will do everything in his power to help Lukashenko survive — politically and, if need be, on the ground. From his intervention in Syria to bail out Bashar Assad, his staunch support for Venezuela's Nicolas Maduro, to the revolution in Belarus — Putin sees himself as the champion of the world's besieged authoritarian regimes. However, nothing in his eyes compares to Belarus.

The country is nearly totally dependent on Russia economically and is tied to it by a multitude of treaties. The two states have a common external border control system as well as a joint air defense system. Most Russians see Belarussians (erroneously, as most Belarussians would point out) as their ethnic kin with a similar mindset.

If Lukashenko falls at the hands of a popular revolution it would deal a severe blow to Putin's prestige. The idea of "people power" is alien to him. He is worried his own people may pick up on the idea that revolting against authoritarian rule is OK and that the West would use the discontent to remove him. He is also concerned that Russia's so far servile political class might well see Lukashenko's overthrow as a sign of political decline and weakness, something he abhors. He can ill afford a change of leadership in Belarus which he hasn't sanctioned.

The Kremlin will make Lukashenko pay for help

The Kremlin will probably refrain for now from sending in Russian troops to provide "brotherly assistance" to Belarus although it cannot be ruled out completely. The risk of civilian resistance and bloodshed is too high.

Moreover, the idea is not popular with Russians, of which the Kremlin is very aware. But it has a lot of other instruments at hand — electronic warfare and surveillance resources, money and a gigantic propaganda machine, all to be put at Lukashenko's disposal. Moscow can help Belarussian security services and call it an "advisory mission."

If Lukashenko survives with Moscow's help, he will have to pay the price and cave in to Moscow's old demands: From recognizing the annexation of Crimea, to granting Moscow the right to build military bases in Belarus, and unifying fiscal policies with Russia.

Should that happen, it would make Belarus a de facto Russian province. However, should Lukashenko be forced out of office, Putin will probably resort to his plan B. When new presidential elections are held, the Kremlin will pick and push hard for a pliant pro-Russian candidate, whoever this may be.

Putin's worst fear is the emergence of a democratic, Western-oriented, EU-friendly Belarus. This may seem not very likely, but he doesn't want to take any chances. Putin's best hope is that the EU and the US will not dare to challenge him on what he considers his home turf and that if he hangs on long enough, with or without Lukashenko, the Europeans and the Americans will eventually become distracted by other problems and leave Belarus to him.

With the COVID-19 pandemic continuing, the US presidential elections approaching and ongoing differences on Russian policy between Eastern and Western EU members, these hopes are not completely unfounded.

Iran: Scores trapped as building collapses in Abadan 1h ago