Three decades after forming a mass human chain for their own independence, thousands in the Baltic states did it again for Belarus. The protest action took place as tens of thousands demonstrated in Minsk. 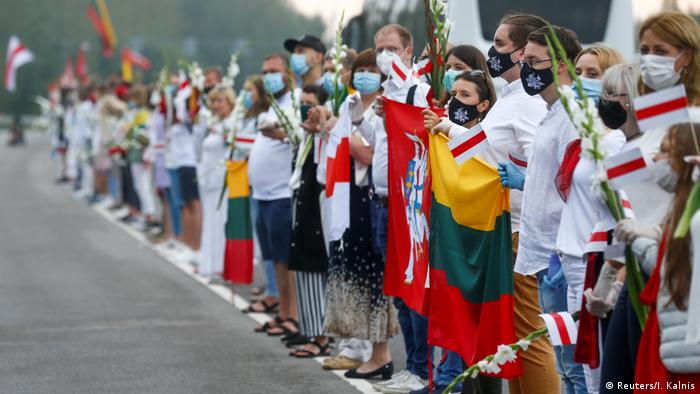 Thousands formed a human chain on Sunday in Lithuania, in a display of solidarity with protesters in Belarus on the 31st anniversary of the famous Baltic Way protest.

The Baltic Way was a pivotal moment in the region, when millions formed a human chain that ran 600 kilometers (372 miles) through Lithuania, Latvia and Estonia, to express their desire for independence.

On Sunday, thousands were expected to join the human chain stretching some 30 kilometers (19 miles) from the Lithuanian capital Vilnius to the border with Belarus.

Read more: The Baltic States: From Soviet to European

Demonstrators were joined by key political figures in Lithuania, such as President Gitanas Nauseda.

"Three decades ago, Lithuanians lined up in a human chain together with their Latvian and Estonian brothers. The Baltic Way sent the message of Freedom. Today Belarusians are sending their message to the world: they want to be free,” Nauseda wrote on Twitter.

Demonstrations were also expected in Latvia, where hundreds of protesters marched along the border with Belarus and formed a human chain in the village of Piedruja, with Belarusian border guards looking on from the other side of the Daugava River.

"This is our Baltic way to express solidarity with all the people in Belarus," Inese Vaivare, the main organizer, told the cheering crowd in Piedruja. 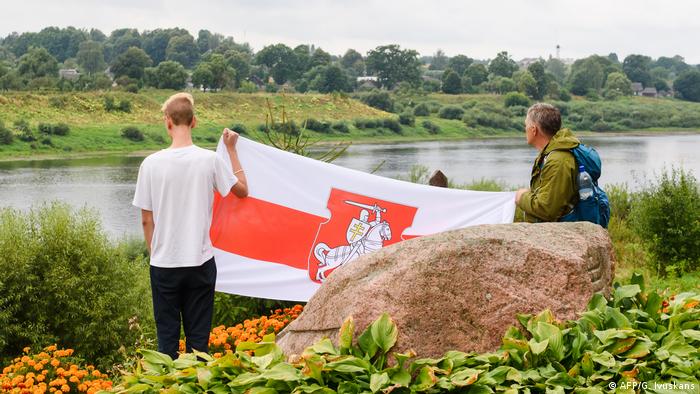 Human chains are also planned in the Estonian capital Tallinn and along the iconic Charles Bridge in Prague.

Belarusian opposition leader Svetlana Tikhanovskaya expressed support for the actions of the three neighboring countries. Tikhanovskaya is currently in Lithuania, where she fled to shortly after the election that sparked a large protest movement in Belarus to demand the ouster of long-time president Alexander Lukashenko.

"It means a lot not only for me but all Belarusian people and they feel this support... It's very beautiful," Tikhanovskaya told AFP in an interview on Saturday.

Sunday marked another day of large demonstrations in Belarus, as tens of thousands of joined a rally against Lukashenko on Independence Square in the capital Minsk. Protesters rallied in defiance of threats from the state, even as security forces had blocked many metro stations, forcing large groups of people to venture out on foot.

The opposition leader gave her first press conference since fleeing the country. Earlier, she called on workers to step up their strikes in a bid to make President Lukashenko resign.