Amid unrest in Belarus, Lukahsenko’s top rival Sviatlana Tsikhanouskaya said she left the country because "what is happening now is not worth a single life." Lithuania said Tsikhanouskaya was "safe" on their territory. 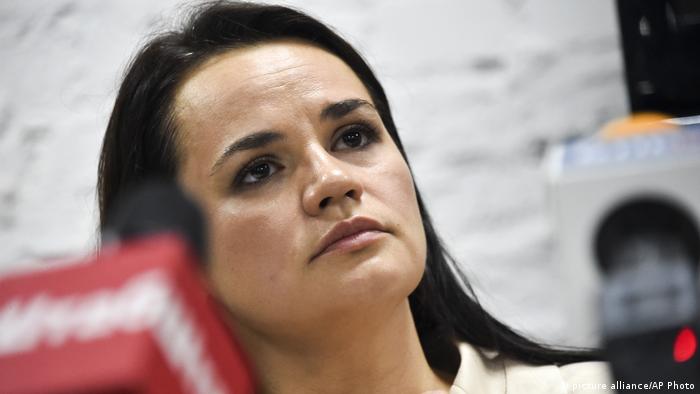 Sviatlana Tsikhanouskaya, the main challenger in the disputed presidential election in Belarus, said Tuesday she made a "difficult decision" to leave her homeland, but did so of her own volition.

As protests against Alexandar Lukashenko's alleged victory grow more violent, Tsikhanouskaya  tried to explain the reasons behind her sudden departure in YouTube video.

"You know, I thought that this whole campaign really had hardened me and given me so much strength that I could handle anything," she said. "But, probably, I'm still the weak woman I was in the first place. I have made a very difficult decision for myself," before adding, "I made this decision absolutely independently."

"Children are the most important thing we have in life," continued Tsikhanouskaya . "I know that many of you will understand me, many others will condemn me and some will even hate me. But God forbid you ever face the choice that I faced.''

"People please take care of yourselves," she added. "What is happening now is not worth a single life."

The Belarusian government also insisted that she left on her own accord.

Meanwhile, Lithuanian Foreign Minister Linas Linkevicius confirmed Tsikhanouskaya  had crossed the border during the protests in her home country and was "safe."

European Union foreign policy chief Josep Borrell said that the bloc will hold a thorough review of its ties with Belarus after the fallout from Sunday's disputed election shows no signs of abating.

Borrell said the EU is considering action against those involved in the massive police crackdown on election night and that the bloc was also mulling a response to suggestions that officials interfered with the ballot.

"We will be assessing the Belarusian authorities' actions and conducting an in-depth review of the EU's relations with Belarus,'' Borrell said in a statement.

He added that "the elections were neither free nor fair" and that the 27-member bloc may take "measures against those responsible for the observed violence, unjustified arrests, and falsification of election results."

Incumbent Belarusian President Alexander Lukansheko claimed victory in Sunday's election with 80% of the vote, despite widely held claims that the election was not fair.

Tsikhanouskaya  had also claimed victory on Sunday, telling reporters "the authorities need to think about peaceful ways to hand over power. Of course we do not recognize the results."

Lukashenko has held a firm grip on power in Belarus since winning the presidency in 1994. He relies heavily on the police, the military, and the country's domestic intelligence agency which still bears the Soviet-era name KGB.

Tsikhanouskaya's rallies drew some of the largest crowds in Belarus since the Soviet Union dissolved in 1991. A former English teacher, she was initially reluctant to run in the election after she said she received an anonymous threat that her children would be taken away. She moved her children to Lithuania during the campaign.

After Tsikhanouskaya's decision to flee her homeland, the anti-Lukashenko camp "lost their symbol" of resistance and was left rudderless, Belarusian journalist and analyst Franak Viacorka told DW TV.

"I can see the repetition of the events of 2010, during the presidential elections when major presidential candidates were approached by the KGB and given the hard choice," he said.

"The Belarus KGB is one of the harshest secret services in the world," the analyst continued. "They know all the Soviet practices, how to manipulate people, how to force anyone to do what they want. And Sviatlana Tsikhanouskaya was not prepared for that."

"Now that she has fled, the people have lost their symbol. The protest became totally leaderless, which creates chaos…that is the main goal for this situation for the KGB: to divide."

Protests continued throughout Belarus on Monday night, leading to at least one death. The opposition has accused Lukashenko of rigging the vote in order to win his sixth straight term in office. Police fired tear gas, rubber bullets and stun grenades at protesters in the capital, Minsk. Protesters created barricades and retaliated with rocks and petrol bombs.