One dead as Belarus police clash with protesters in Minsk, after Lukashenko win

It is the second day in a row that people have demonstrated, angry at the results of Sunday's presidential vote. Security services claim to have foiled an attempt to assassinate the president's main election rival. 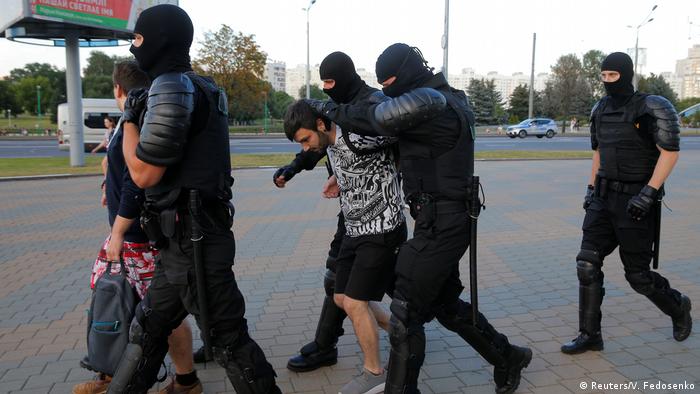 One protester died, the Interior Ministry reported, alleging that he had intended to throw an explosive device but it blew up in his hand.

Security services used tear gas and shot rubber bullets at people attending peaceful demonstrations and detained a number of protesters, according to reports by independent Belarusian media. Access to central squares and streets was barred.

Police dragged protesters out of the crowd and beat them with truncheons. More than 30 people were arrested, reported news agency Reuters, citing an eyewitness.

Lukashenko won a sixth term as president with 80% of the vote, according to preliminary results released on Monday. The president's opponents have claimed that the election result was rigged in his favor.

On Sunday evening and into Monday, mass protests erupted in cities across the country, including the capital Minsk, angry at the result. Belarusian authorities detained about 3,000 people at demonstrations throughout the country, the Interior Ministry said in comments carried by Russian media.

The president has been in office since Belarus established the role in 1994 and is dubbed by critics as "Europe's last dictator."

The international community has expressed concern over the result. Earlier on Monday, Germany's Foreign Ministry said there was "no sign of a free and fair election in Belarus."

The US' Trump administration was "deeply concerned" about the elections, said White House press secretary Kayleigh McEnany on Monday.

"Severe restrictions on ballot access for candidates, prohibition of local independent observers and polling stations, intimidation of opposition candidates and then detention of peaceful protesters and journalists have marred the process and we urge the Belarusian government to respect the right to peaceably assemble and to refrain from the use of force," said McEnany.

Meanwhile, the head of the Belarusian state security service said on Monday it had prevented an attempt on the life of Lukashenko's main opponent, Svetlana Tikhanovskaya, the ONT television channel reported.

Ahead of this, the Interior Ministry’s ant-extremism division intercepted a message reading that a "sacred sacrifice is needed," chief of the country’s State Security Committee (KGB) Valery Vakulchik told ONT.

According to Vakulchik, the security team has identified the sender and are planning an arrest.