More than 100,000 protesters have again rallied to demand the resignation of President Alexander Lukashenko after a disputed election. The army was deployed, purportedly to protect national monuments from protesters.

Tens of thousands of protesters took to the streets of Minsk on Sunday in the latest mass demonstration against the Belarusian government.

Draped in red-and-white opposition flags, they descended on Independence Square, chanting slogans against President Alexander Lukashenko, who secured victory in a controversial election on August 9.

There were no official figures on crowd size, but The Associated Press estimated that 150,000 people took part.

"This is a huge demonstration of something that, frankly, would have been unthinkable in Belarus just a few months ago," Nick Connolly, DW's correspondent in the Belarusian capital said.

Video from the state news agency Belta showed a government helicopter landing on the grounds of the Independence Palace, the president's working residence, where protesters had moved. Lukashenko got off holding what appeared to be a Kalashnikov-type automatic rifle.

At one point, local news outlets published videos on social media showing water cannon and riot police with shields moving towards Independence Square, although the protest eventually passed off without incident.

Authorities have arrested nearly 7,000 people since the demonstrations erupted in the wake of vote, with protest organizers alleging police of torturing and abusing the detainees.

One of the demonstrators, who had been an observer for election, said he was "shocked" at Lukashenko's claim of receiving 80% of the vote.

"It [the result] was a blatant lie. The numbers were so off that you couldn't say that the election was fair. I can't forgive that," he told DW. 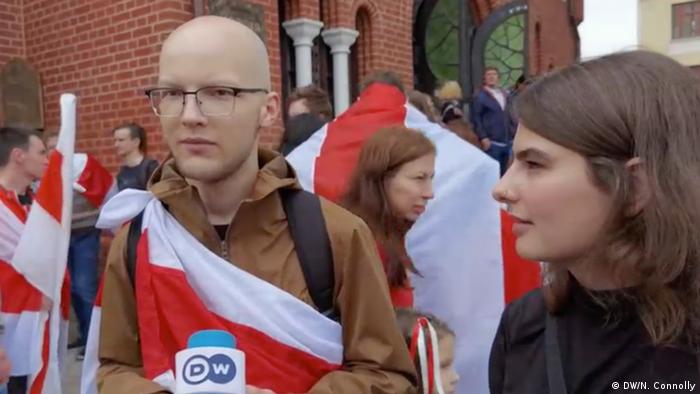 The Defense Ministry announced Sunday it will deploy the army to protect national monuments from protesters and any unrest near these sites will not be tolerated.

The ministry said it would intervene to protect World War II memorials, which it described as "sacred places," and ordered the closure of four metro stations in central Minsk.

"The news [of the army deployment] has outraged people here. So far only the riot police have been used against the protesters. It is unclear whether these soldiers will be willing to use force against unarmed demonstrators," said DW's Connolly.

When asked whether Lukashenko would resort to violence again, one of the protesters told DW: "Right now, no, but it's possible [in the future] because our president is pretty crazy."

On Saturday, Belarus' BelTA state news agency cited Lukashenko as ordering his defense minister to enact "the most stringent" army measures while visiting military units at Grodno, near the country's border with Poland.

Belarus' army must "protect the territorial integrity of our country," said Lukashenko, adding "military support is evident," a reference to NATO.

The European Union rejected the Belarus election results and has vowed to impose sanctions over the government's crackdown on protesters.

Top EU diplomat Josep Borell warned that Belarus should not be allowed to become a "second Ukraine" and said it was necessary to deal with the 65-year-old Lukashenko, Europe's longest-serving leader.

Sviatlana Tsikhanouskaya, the 37-year-old opposition leader who fled to Vilnius after Lukashenko declared victory in the presidential vote, has urged protesters to continue to exert pressure on the authorities, saying it was "important to continue to be united in the struggle for the rights."

The authorities have to understand "we are not a protest movement... we are a majority and we will not step away. We are not afraid of them anymore," she told AFP.

The president's powerful ally, Russia, has warned European leaders against interfering in Belarus, saying it would step in to quell the post-election unrest if necessary.

Russian Foreign Minister Sergei Lavrov on Sunday slammed Tsikhanouskaya and said that her program is "neither constructive nor aimed at a dialogue."

Read more: Opinion: Putin wants Belarus in Moscow's orbit — with or without Lukashenko

He warned that opposition's call for Lukashenko's resignation is pushing Belarus toward a Venezuela-like scenario, adding that it is impossible to prove that the Belarusian strongman did not win the presidential vote.

Moscow called for a broad national dialogue in Belarus to resolve the situation, according to the RIA news agency.

US Deputy Secretary of State Stephen Biegun is scheduled to visit Belarus' neighbor Lithuania next week as part of a trip that will also include a stop in Russia for talks on the election fallout. According to AFP, Biegun has also planned a meeting with Tsikhanouskaya.

Lukashenko has also threatened Belarus religious leaders, who earlier this week called for restraint by authorities and priestly access to jailed protestors.

On his presidential website, he said he was "astounded by the stance of our religious confessions," warning them not to expect state "indifference."

The majority of 9.5 million Belarussians are Orthodox; 15% are Catholic.