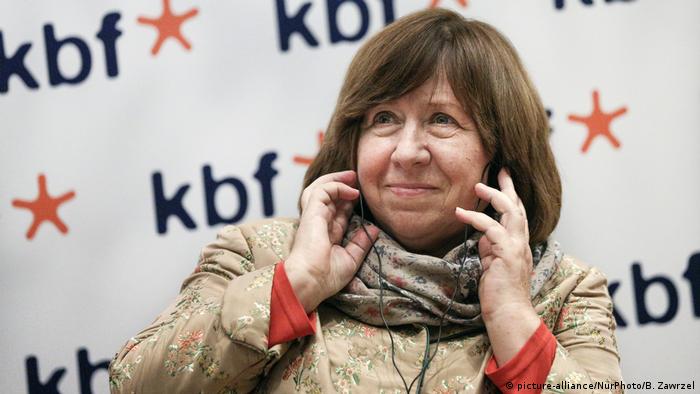 Belarus' most famous author was called in for questioning on as part of a criminal probe into an opposition council, the group said on Monday. Svetlana Alexievich, winner of the 2015 Nobel Literature Prize, is a member of the Coordination Council, which was established by opponents of Alexander Lukashenko after he was declared winner of the country's disputed August 9 election.

The 72-year-old Alexievich is set to appear for questioning on Wednesday. She has not attended any of the council's meetings, however, and is known to rarely leave her house amid the coronavirus pandemic.

Read more: Cops quit in Belarus: 'That's not why we entered the force'

Meanwhile, two members of the Coordination Council were arrested Monday. Olga Kovalkova and Sergei Dylevsky were detained in the capital, Minsk. Kovalkova is a top associate of  Sviatlana Tsikhanouskaya, Lukashenko's main challenger in the disputed election who has since fled to Lithuania. Dylevsky is a tractor plant worker who has risen to prominence as a strike leader. The two are accused of illegally organizing a strike.

"We are under pressure. This morning two members of the presidium of the Coordination Council were detained," another member of the organization, Liliya Vlasova, told reporters.

"We consider these actions of the authorities are absolutely unlawful," she added. "We are negotiators."

Alexander Lavrinovich, who is leading a workers' strike at a major industrial plant, was reportedly detained later in the day.

German foreign minister: 'We're using all the avenues we have'

Tsikhanouskaya on Monday met with US Deputy Secretary of State Stephen Biegun in the Lithuanian capital of Vilnius. Biegun called the the 37-year-old, who entered the race after her husband was arrested and prevented from running, a "very impressive person."

He condemned "the violation of human rights and brutality that we've seen play out in Belarus," but stressed "the United States cannot and will not decide the course of events in Belarus, this is the right of Belarusian people.''

Tsikhanouskaya in a statement reaffirmed her commitment to negotiations over a transition of power in Belarus as a way out of the current crisis.

Both the US and the European Union have rejected the results of the election in Belarus, and called for talks on a transition of power.

Speaking on his trip to Ukraine on Monday, German Foreign Minister Heiko Maas called for Lukashenko "not to resort to violence, to respect the rights of the protesters."

His remarks come a day after mass rallies in Minsk, which saw over 100,000 people gather in the streets to again demand Lukashenko's resignation.

In Moscow, Kremlin spokesman Dmitry Peskov said Russian President Vladimir Putin had spoken with Lukashenko by phone on Monday. Peskov praised the protesters for their lack of "provocations" and security forces for behaving "very appropriately."

Read more: Opinion: Putin wants Belarus in Moscow's orbit — with or without Lukashenko